Dox Fov ’10 on How Medicine, Technology, and the Law Reshape Reproduction 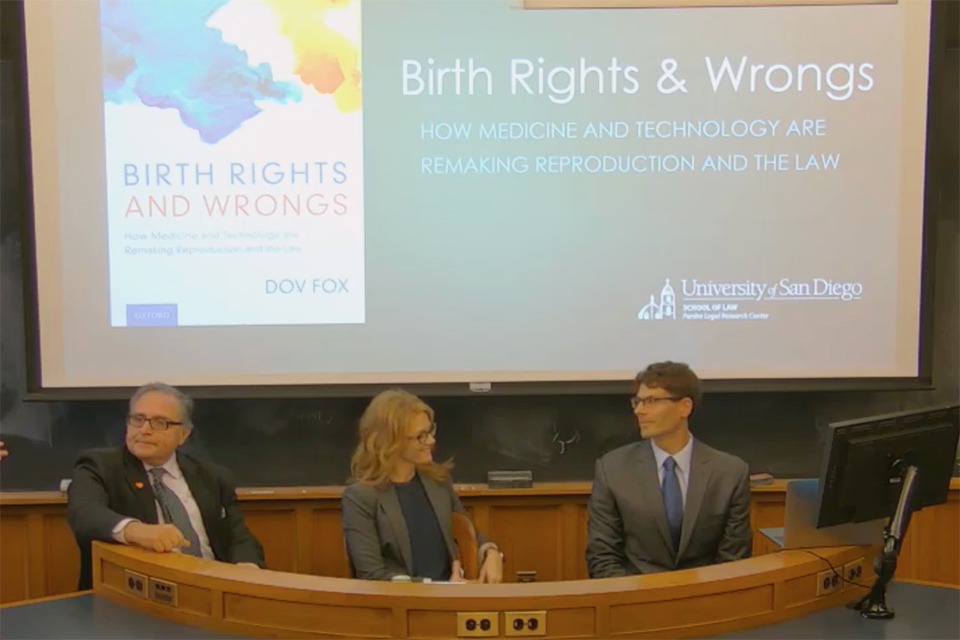 On October 23, 2019, the Solomon Center for Health Law and Policy hosted a panel discussion exploring the legal implications of assisted reproduction gone wrong. The event featured Professor Dov Fox ’10, the Herzog Endowed Scholar and Professor of Law and founding director of the Center for Health Law Policy & Bioethics at the University of San Diego School of Law.

Based on Fox’s new book, Birth Rights and Wrongs: How Medicine and Technology are Reshaping Reproduction and the Law, the panel covered the difficult question of how to fill the regulatory void of reproductive technology, wrestling with questions of family, race, and the meaning of life itself. The panel was cosponsored by the Law Student Alliance for Reproductive Justice (LSARJ), Yale Health Law & Policy Society (YHeLPS), Yale Law & Technology Society (TechSoc), and Yale Law Women (YLW).

Fox described how governments and courts alike have failed to reckon with the harms that can come from reproductive technology and suggested a new framework for establishing liability in cases of reproductive harms. As he describes it, reproductive technology today is the stuff of miracles — at least for most families. The problem is, it hasn’t been well-regulated, leading to mistakes, from falsified sperm donor identities to fertility clinic equipment mishaps to birth control failures. These mistakes have devastating consequences for individuals and families. These mistakes aren’t inevitable — rather, they’re the result of a regulatory vacuum at the federal, state, and professional level. However, even in the midst of this void, courts haven’t stepped up to address reproductive issues, leaving victims to fall through the cracks of judicial precedent.

Fox proposed reforming tort law as a mechanism to better deter reproductive negligence and compensate victims of devastating reproductive harms. Today, victims lose because they can’t point to the physical and economic harms that courts require to win in litigation. Fox proposed three novel causes of action — procreation imposed, deprived, and confounded — that victims could use to hold the profession to account, protect against future harms, and receive compensation for their losses.

Kraschel countered Fox’s focus on tort law as a solution to the regulatory void by suggesting that regulation would be a more equitable and effective solution. She posited that regulation would be more efficient, given the small damages likely in cases of reproductive harms, and would be more effective at targeting the right actors in the system, such as sperm banks who knowingly trade on information for profit. Most importantly, she brought up that tort law is a normative exercise, and that private law becomes public when it recognizes injuries and harms. In the sphere of reproductive interests, this has profound implications for genetic essentialism and family formation.

Patrizio shared insights from the perspective of a practitioner, stating that the while the specialty is in fact remarkably self-regulated by the Society for Assisted Reproductive Technologies, “perhaps a little bit more regulation would not be harmful.” He warned, however, that overregulation could stymie innovation and research by many years, including, for example, research that would revolutionize the storage of sperm, eggs, and embryos and current efforts to delay the effects of menopause.

Patrizio also addressed Fox’s notion of “procreation deprived,” emphasizing that damages would necessarily only account for the chance of procreation, given the biological realities that only a small percent of implanted embryos (approximately 20 percent for women under 35) will lead to viable pregnancies.

Following their formal remarks, the panelists discussed further implications of scientific and legal developments on assisted reproduction including the challenges of gamete supplier anonymity in the age of commercially available genetic testing from companies like 23andMe. In a brief question and answer session that concluded the event, audience members asked about the role of contracts in regulating the relationships between assisted reproductive technology providers and patients in the event of mistakes, leading panelists to reflect on the power imbalances in the contracting relationship which, according to Kraschel, underscore the need for consumer protection regulations.