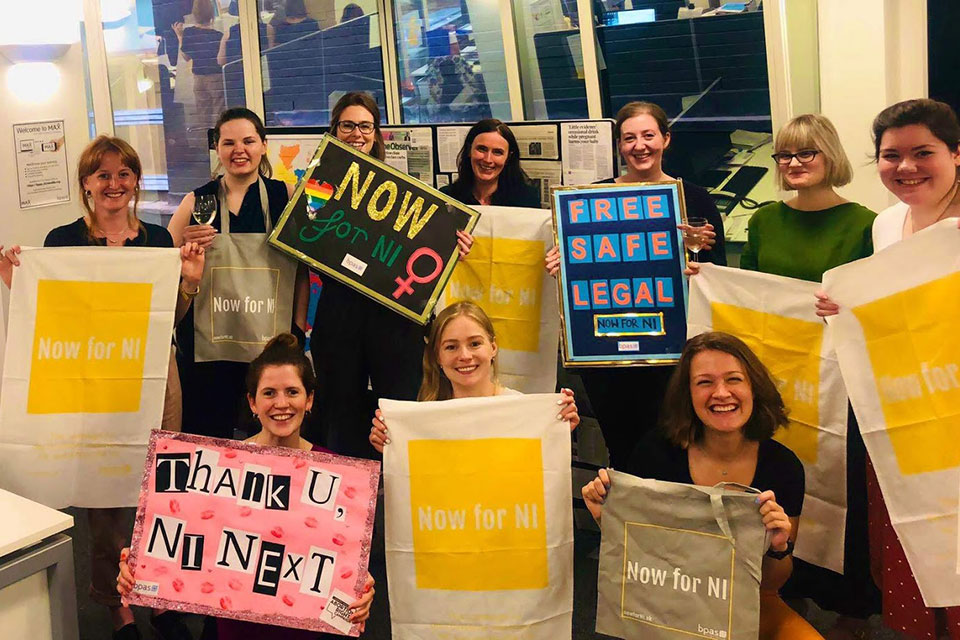 Taylor Burgess, second from right, is spending this year with the British Pregnancy Advisory Service on a Bernstein Human Rights Fellowship

Robert L. Bernstein International Human Rights Fellow Taylor Burgess ’19 LL.M. is spending her fellowship year at the British Pregnancy Advisory Service in London, where she focuses on analyzing Long-Acting Reversible Contraception (LARC) delivery programs in the U.K., and whether the public administration of LARC is interfering with women’s bodily autonomy and reproductive freedom.

Burgess’ current work at the British Pregnancy Advisory Service (BPAS) builds on her experience at Yale Law School, where her studies bridged sexuality and gender, health, and human rights. Burgess recalled one class, attended by a “good mix of law and public health students,” where she was encouraged to investigate whether there are “better or worse ways to use human rights in causes of sexuality and gender.” Her time in the Allard K. Lowenstein Clinic for International Human Rights, Burgess added, helped her prepare for the practical “human rights reporting side of her work.”

In Burgess’ first few months of the fellowship, she has researched the U.K.’s LARC policy and spoken to different groups and stakeholders, including organizations devoted to reproductive justice work, with the goal of creating a “sustainable, effective, and useful report” that will help “promote access [to LARC] but in a positive, respectful manner.”

Burgess explained that since 2005, there has been an increased push for LARC uptake in the U.K., partly because it is a “cost-effective, reliable, and positive option for women and health services.” LARC requires neither regular preparation nor timing, she said, and it can be a “discreet and private” contraceptive. However, she also cited concerns that the way LARC is being provided may carry “risk of state interference with women’s reproductive decision-making.”

Burgess’ research is twofold, evaluating these concerns on both individual and collective levels. At the individual level, Burgess is investigating whether the programs providing women with LARC are “impairing their ability” to choose whether or not to use this method of contraception, since, she explained, “seeking removal can have resistance from practitioners.”

At the collective level, Burgess is researching assertions that the publicly-funded LARC initiatives are targeted at particular populations in hopes of controlling their rates of reproduction. She mentioned a program that “receives government funding but is not a government program,” which “provides extra support and services for women who have had [multiple] children taken into state care.” However, the support is conditional, offered only if eligible women agree to use LARC. The number of these practices, Burgess said, is “planned to double in the next decade.” Critics of the program, she explained, argue that making support conditional on LARC use limits women's reproductive choice and freedom.

Other issues Burgess has encountered include a program that aims to reduce “alcohol-exposed pregnancies” by referring LARC to mothers with a history of alcoholism or previous pregnancies exposed to alcohol use, and the practice of encouraging women with a high Body Mass Index (BMI) to delay LARC removal “until they lose weight” in order “to be at a better health condition for pregnancy.” She says the motivation of people delivering these schemes is often the health and wellbeing of women and the children they may or may not go on to have, but those concerns need to be balanced with respect for the autonomy of the women involved. Burgess is concerned that the way in which public health services have administered LARC “reflects whose fertility is valued and whose is not.”

In her report, Burgess hopes to critically examine “public health policies that encourage LARC uptake,” to “link policies [encouraging] LARC uptake to vulnerable populations,” and to look at how “complex social circumstances” contribute to this research.

The ethics committee overseeing the study’s research ethics recently approved the study so Burgess will soon begin conducting interviews. Over the next couple of months, she expects to conduct between thirty and fifty interviews with different stakeholders through intermediary organizations that provide services to women who have been “targeted by LARC.” She will be speaking with users targeted for LARC use, academic scholars, and practitioners.

Burgess expressed her enthusiasm for working with BPAS since, according to Burgess, the charity looks at the “big picture” in reproductive justice issues and serves as a “space where human rights can be quite constructive.” She has appreciated seeing how human rights frameworks can help “shape the nature of state interference” by empowering “women’s decisions” rather than urging women “to have a child or not.”

Within the next seven months of her fellowship, Burgess hopes to work with BPAS “to start the conversation within the U.K. for recommendations about what positive delivery should look like.” She aims to “stimulate other people in fields like public health and reproductive justice” to “fill a gap in the conversation about the problematic aspects of LARC administration.” She is glad, she said, to be engaging in a “collaborative, sustainable effort to create long-term change in this area.”

Burgess believes that the government should be “examining policy and the way that providers engage with practitioners to develop a standard where people have information about and access to all forms of contraception, including LARC, and are supported to decide freely about their use.” She emphasized that while “contraception can be empowering,” it has also historically been be used to “control the fertility of women of color, disabled women and other marginalized groups.” She expressed her hope that her work will support “all women’s reproductive decision making” and ensure that access to contraception is “attuned to women’s freedom of choice.”