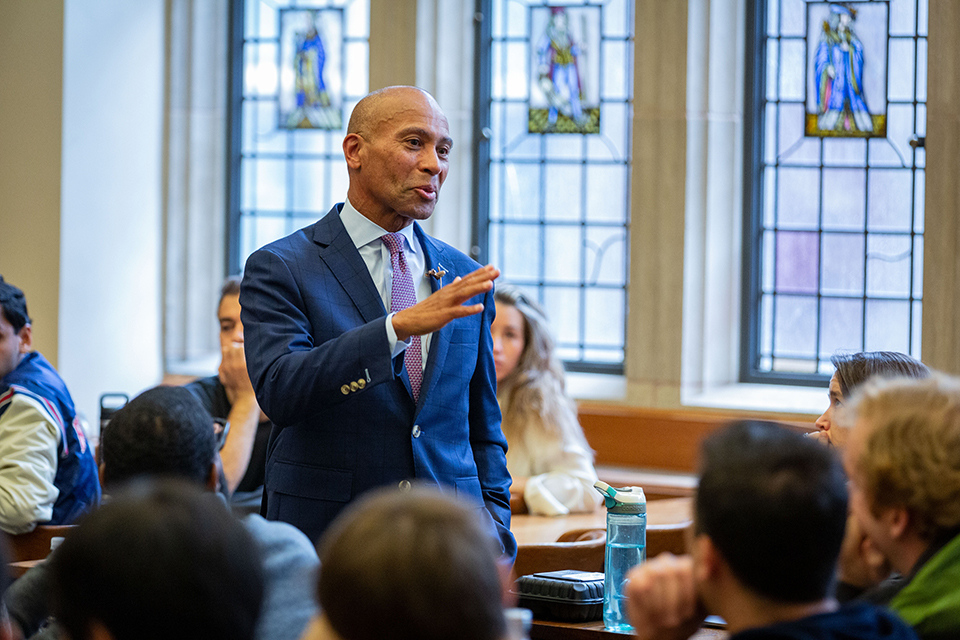 Former Massachusetts Gov. Deval Patrick spoke to a capacity crowd on the “Dual Crises Facing Our Democracy” on Oct. 4 as a part of The Tsai Leadership Program’s Democracy in Crisis Speaker Series.

Patrick spoke to students for nearly an hour about citizenship and democracy.

“If we want better policies and certainly better politics, ultimately we have to challenge ourselves and others to become better citizens,” Patrick said. “These include the responsibility to be informed, discerning, to engage, and to be a good steward to see ourselves as members of community where each of us sees and accepts the stake we have in each other’s dreams and struggles as well as our own.”

Patrick closes out every discussion on his podcast Being American by asking his guests, “What does it mean to you today to be American?” He said he asks this question because he believes that despite the reported division between Americans, there are commonalities surrounding what it means to be a U.S. citizen.

Born and raised on the South Side of Chicago, Patrick said every child in his neighborhood was “under the jurisdiction of every adult on the block.”

The adults in his community were trying to demonstrate that being a part of a community is understanding that you belong to others and they to you — a common stake, he said. He saw families sharing food, clothes, and other necessities. He described how the women in his church “cut us a look” when he and the other children were restless in church. He said those families were modeling citizenship, and that democracy fundamentally depends on it.

“When it comes to citizenship, one needs an understanding that we have a common stake and that we share that stake in each other’s dreams and struggles. We better get busy and step up because American democracy is in trouble,” said Patrick.

Patrick told the crowd that Americans currently face two big challenges to democracy. The first, is to make democracy function better by making it more transparent. He cited efforts in 19 states to weaken the Voting Rights Act through attempts to “frustrate, complicate, and…even overturn the vote.”

The second challenge facing the country, according to Patrick, is to make democracy matter — to make the vote and citizenship meaningful. He said that one-third of eligible Americans don’t vote not because it is harder to vote than it should be, but because they are not convinced their vote will make a difference.

“Unkept promises, inauthentic candidates and uninspiring campaigns, insurmountable odds, impenetrable political establishments, and changes that are slow to come, combined with prognosticators who keep telling us what the outcomes will be before anyone casts a ballot,” Patrick said. “All of it serves to convince people that our civic duty to vote is a waste of time.”

“The governor laid out both structural and social challenges to our democracy. He challenged us to make our democracy matter to ordinary citizens — to give them a reason to believe their vote and voice are worth contributing because they have a meaningful say in their own destiny,” said Don Carlson, Senior Executive Director of The Tsai Leadership Program. “We’re a long way from that ideal and seem to be going backwards, but Governor Patrick urged YLS students to help turn those trends around.”

“Instead of letting our neighbors’ dreams and struggles be purely an abstract concern, let’s start by asking ourselves what we can do and do it however small or inconsequential. We ought to challenge ourselves to turn to one another instead of on one another,” said Patrick.

The answer to the challenges that are facing democracy, he said, is for citizens to reclaim their voice and one’s own discouragement and frustration. Patrick said that by working together in the spirit of community and lifting up leaders who are prepared to deliver on the promise of democracy, Americans can leave democracy in better shape for future generations.

During the question and answer portion of the event, Patrick engaged further with students.

Kevin Baisden ’25 said he attended the event because he doesn’t often get to interact with a Black politician from a prominent state-level position who has both public and private sector experience. The former governor’s experience aligns with his own general interest in government, politics, law, and the work of a governor.

“I don’t think I’ve ever seen students paying such rapt attention to a public figure giving a talk. Governor Patrick radiates the same sincerity and openness in a one-on-one conversation and in a room of 65 people,” Carlson said. “He made a special effort to connect with every student who posed a question or offered a comment, walking into the audience and posing his own questions back,” said Carlson.

Gov. Patrick’s experience spans both public and private sectors. He headed the Civil Rights Division of the Department of Justice and served as General Counsel for both Texaco and Coca-Cola. He currently directs the Center for Public Leadership at the Harvard Kennedy School of Government. Later in the day, Patrick joined a class discussion about his role leading the Commonwealth of Massachusetts through the traumatic aftermath of the Boston Marathon bombing under the historic mantra “Boston Strong.”