Graetz and Greenhouse Publish Book on the Burger Court

In their new book, The Burger Court and the Rise of the Judicial Right, Professor Michael J. Graetz and Knight Distinguished Journalist in Residence and Lecturer in Law Linda Greenhouse ’78 MSL put forth a new and comprehensive evaluation of the Warren Burger Supreme Court. Though traditionally described as a moderate or transitional court, the authors demonstrate that the Burger Court was actually a conservative one whose constitutional decisions still impact the political landscape in which we live today. 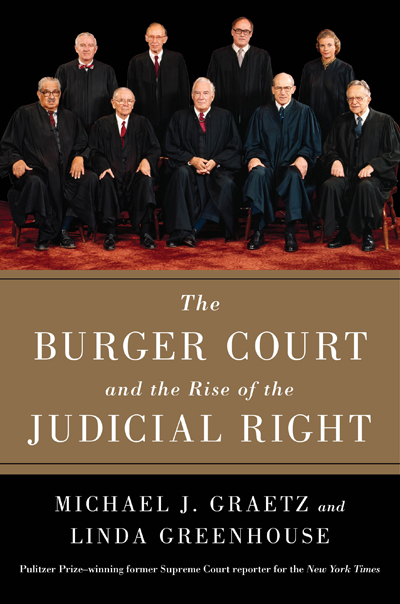 Beginning with Richard Nixon’s 1968 promise to move the Supreme Court away from the liberalism of the preceding Warren era, the authors describe how the Burger Court veered to the right of the political spectrum in areas such as criminal law, race, and corporate power. Through an examination of the legal and political roots of some of the most significant Burger Court decisions, Graetz and Greenhouse not only clarify this rightward judicial shift, but also demonstrate how these decisions affects us in the present day.

Hailed by Lincoln Caplan as “an engrossing and excellent book that will lead Court-watchers to think in importantly different terms about the Burger Court,” The Burger Court and the Rise of the Judicial Right draws on the personal papers of the justices to produce a description of how the Court came to its most enduring decisions. Graetz and Greenhouse’s work offers a fresh look at a judicial period that has been too often passed over in the field of American legal history.

Professor Graetz began teaching law at the University of Virginia in 1972, early in Warren Burger’s tenure as chief justice. He is now professor of law at Columbia Law School and the Justus S. Hotchkiss Professor of Law Emeritus at Yale Law School, where he has taught for more than 30 years. He has published seven books and more than 80 articles on a wide range of public policy issues. A fellow of the American Academy of Arts and Sciences, he has served in the U.S Treasury Department, received a John Simon Guggenheim Memorial Fellowship, and argued before the Supreme Court.

Linda Greenhouse spent nearly 30 years as the U.S. Supreme Court correspondent for The New York Times, where she won a Pulitzer Prize and earned a reputation as an authoritative and insightful chronicler of the Supreme Court and its justices. As the Joseph Goldstein Lecturer in Law, she currently teaches at Yale Law School and writes a biweekly online opinion column for The Times on the Court and the law. Among her previous books are Becoming Justice Blackmun, The U.S. Supreme Court: A Very Short Introduction, and with Professor Reva B. Siegel, Before Roe v. Wade: Voices that Shaped the Abortion Debate Before the Supreme Court's Ruling, available as a free download from the Law School's library: http://documents.law.yale.edu/before-roe