Human Rights Workshop: David Marshall on the Limitations of the ISIL Trials 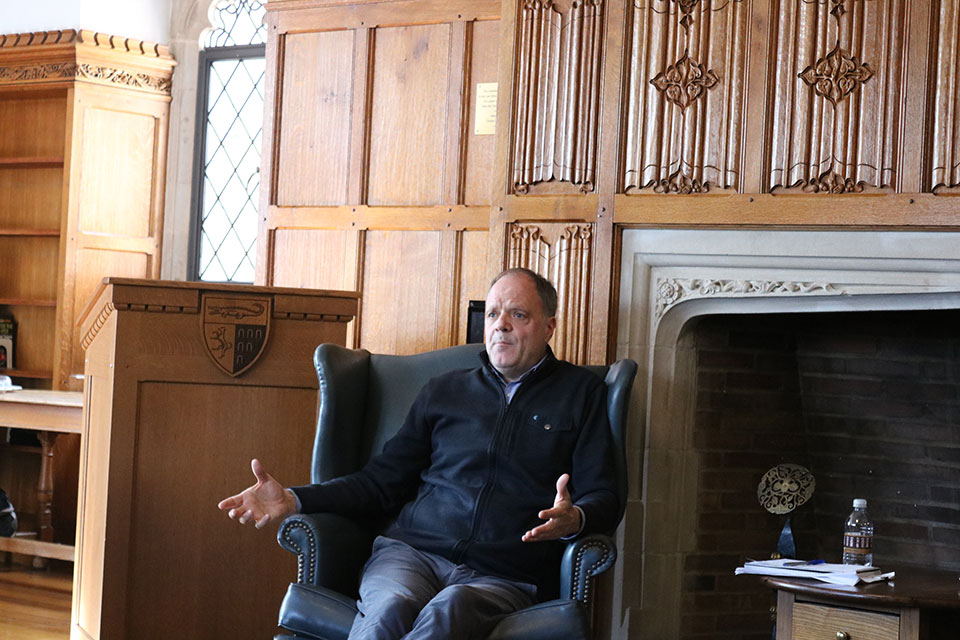 [Marshall spoke in his personal capacity, and his views may or may not represent the views of Global Affairs Canada.]

At the Human Rights Workshop on January 16, 2020, David Marshall, a Visiting Fellow at the Schell Center for International Human Rights, discussed the limitations of efforts by the United Nations and domestic Iraqi courts to investigate and prosecute ISIL members and supporters. Marshall, who is also the Justice Advisor in the Peace and Stabilization Operations Program at Global Affairs Canada, described the barriers faced by the international community to effectively prosecute those who had committed atrocities, and the disconnect between the international effort and the Iraqi legal framework.

Marshall, who in 2003 was hired by the U.N. human rights office as a criminal procedure adviser, described how in the context of Iraq, the U.N. Security Council supported an Iraqi-led effort to prosecute thousands of ISIL fighters for violations of international law.

Marshall explained that the U.N. Security Council effort began with the publication of a U.N. human rights report in 2015 implicating ISIL in acts of genocide against the Yazidis community in northern Iraq.

In 2017, Marshall said, Boris Johnson, then Secretary of State for the Foreign and Commonwealth Office in the U.K., and Amal Clooney advocated for a “specialized  international tribunal for Yazidi crimes.” In September 2017 the U.N. Security Council expanded the scope to include all victims of ISIL crimes.

Marshall said there were suggestions to widen the scope of the U.N. resolution to include “enforced disappearances from [Iraqi/Shi’a militia] checkpoints [where] Sunni men and boys were separated and had not been seen since.” He had recommended, prior to any resolution being adopted, that a technical assessment of the Iraqi justice system be undertaken to identify any serious issues with its functioning. No such assessment occurred, he said.

In September 2017, Resolution 2379 was passed so the U.N. could support Iraqi authorities in their investigation and prosecution of ISIL crimes. In February 2018 the terms of reference for the U.N. team were agreed upon. Though they contained no reference to the death penalty, they did contain a crucial threshold determination: namely, no evidence “collected, stored or preserved” would be handed over “unless there were assurances that the trial process was fair and independent.”

Following the adoption of the U.N. resolution, Marshall joined the U.N. human rights office in Baghdad and became the U.N. team leader on accountability issues, overseeing an investigation  of mass graves found in ISIL-controlled territory and heading the U.N. trial monitoring effort of ISIL cases. He described the “shocking amounts of violence and terror” that the country has witnessed, from the brutal rule of Saddam Hussein to Al Qaeda and ISIL.

According to Marshall, the Iraqi effort to investigate and prosecute ISIL fighters and their supporters has been through a counterterrorism lens, in which thousands of civilians have been dragged before the courts as “supporters” of ISIL although their support was often benign — such as, he explained, selling food or gas to ISIL fighters, or dressing an ISIL fighter’s wound. These cases had “nothing to do with international crimes.” Indeed, international atrocity crimes, the central focus of UNSC 2379, are not part of domestic law.

The exact number of ISIL defendants is unknown, Marshall noted, adding that international media reports have stated there were over 18,000 ISIL defendants in custody. The chief investigation judge in Mosul, which Marshall described as the center of gravity for ISIL trials, told Marshall that his court in 2018 had processed 9,000 cases.

Of the ISIL trials his team monitored, “no case [showed] an underlying crime of killing or sexual violence,” Marshall said. He described the local trials as “fairly short” because in Iraq, like in many civil law systems, the bulk of the evidence-gathering and its examination is undertaken during the investigation phase, not the trial stage. He described some improvements in the quality of investigations, such as a search for truth beyond a confession.

Marshall also discussed the nuances between local courts in the region. Erbil, the capital of the Kurdistan region in Iraq, has its “own legal framework and practice for the prosecution of ISIL defendants.” The Kurdistan region allows for discretionary sentencing, he explained. It also has a moratorium on the application of the death penalty, while federal Iraq does not, which means a defendant facing the same set of facts could be sentenced to death in Baghdad and receive a two-year sentence in Erbil. However, Marshall added, in Kurdistan, the court can rely on secret informer testimony to convict an ISIL defendant, a hold-over from Saddam Hussein not permitted in federal Iraq.

To make matters worse, Marshall said, there appears to be no lawfully constituted federal Supreme Court, meaning there is no forum to provide a remedy for a constitutional error such as a due process violation.

Some two years since the passing of the U.N. resolution, the U.N. investigation team still “hasn’t handed over any evidence” to Iraqi authorities, Marshall pointed out. He also cited an “ominous sign” about the future of the U.N. team, which could be found in a letter sent to the U.N. Security Council in September 2019 from the Foreign Minister of Iraq, which strongly suggested the current mandate for the U.N. team was untenable.

Marshall expressed hope the lessons from the creation of the U.N. investigative team for Iraq will be taken on board in any future establishment of quasi-prosecutorial international entities.