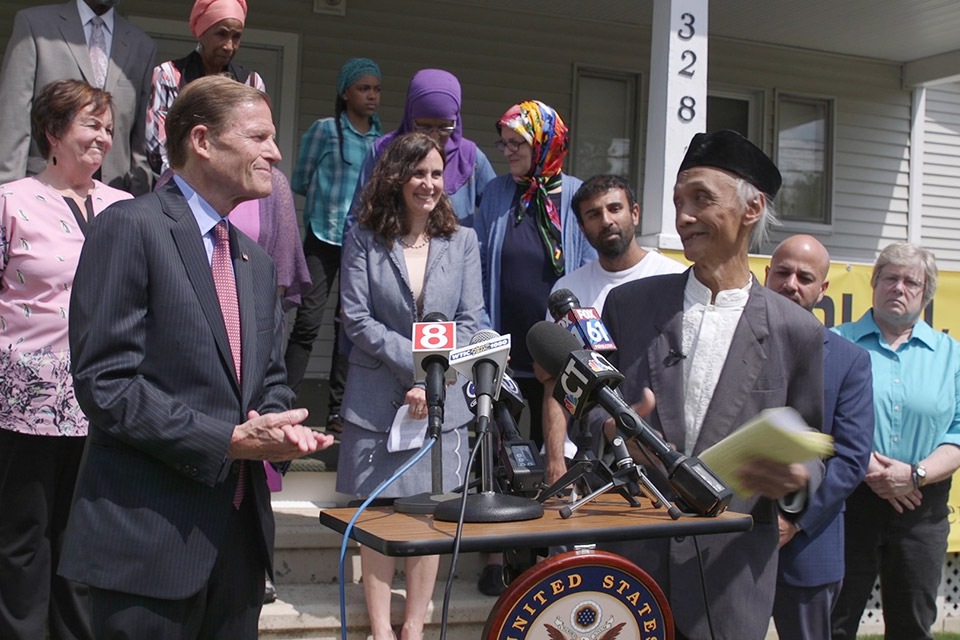 Yale Law School Clinic client Sujitno Sajuti was met with cheers on May 31, 2019 as he departed from the Unitarian Universalist Church in Meriden, Connecticut, ending 19 months in sanctuary for the 70-year-old immigrant. Supporters of Sajuti, including Senator Richard Blumenthal ’73, a representative from the office of Attorney General William Tong, and local interfaith leaders gathered this afternoon to celebrate Sajuti’s momentous exit from sanctuary.

“Today is a day for celebration, but today also should stiffen our resolve that we will reform a broken immigration system,” said Senator Blumenthal, calling the system “cruel, hurtful, [and] inhumane.”

Sajuti entered sanctuary on October 9, 2017, under threat of deportation by Immigration and Customs Enforcement (ICE). The Legal Assistance Immigrant Rights Clinic — a partnership between Yale Law School and the New Haven Legal Assistance Association — was retained to represent Sajuti in January 2018, and expeditiously filed a U Visa application on his behalf in February 2018.

The Clinic began working with Sajuti after the Connecticut Immigrant Rights Alliance (CIRA) identified him as likely eligible for a U Visa, a type of relief for survivors of certain types of crimes, and brought his case to the attention of the Clinic’s supervising attorney, Diana Blank ’13.

On May 24, 2019, U.S. Citizenship and Immigration Services (USCIS) granted Sajuti deferred action, based on his demonstrated eligibility for U nonimmigrant status. ICE has acknowledged that grant of deferred action, and assured Sajuti that it has ceased its enforcement actions against him.

“After representing Mr. Sajuti through his long sojourn in sanctuary, it brings the greatest joy to know he will walk out today and again participate in the community that he rightfully calls home,” said Hannah Hussey ‘20, a student on Sajuti’s legal team. “It can be hard to find victories in this immigration climate, but today is certainly one of them.”

“Sujitno Sajuti came here over 30 years ago to pursue his studies and provide for his family. Connecticut is his home. I’m happy that our office was able to help Mr. Sajuti through this process. After almost 19 months, he can finally get his life back prior to the conclusion of Ramadan and continue to be a contributing member of the West Hartford community,” said Senator Chris Murphy.

“Sujitno and his wife Dahlia have become my own family, seeing their faces finally beam with their usual brightness fills my heart with indescribable joy.” said Alok Bhatt, Community Defense Coordinator at CIRA. “However, our struggle does not end here. We will keep fighting until we get freedom for Nelson, and all of our community members facing ICE's cruelty,” continued Bhatt, referencing Nelson Pinos, who has been in sanctuary in New Haven since November 2018.

Sajuti, originally from Indonesia, is a beloved member of the West Hartford community who has lived in the United States for approximately three decades.

“I have spent the past weeks in sanctuary observing the holy month of Ramadan, isolated and unable to join with others in prayer,” said Sajuti. “I have reflected on the first two parts of Ramadan, which are times for mercy and forgiveness. It is fitting that during this third and final stage of Ramadan – salvation from Hell – I am leaving my long period of confinement and am finally free to rejoin my community.”

“This shows once again the power that working against injustice can have,” said Rev. Dr. Jan Carlsson-Bull, minister at the Meriden Unitarian-Universalist Church.

Sajuti came to the United States in 1989 to pursue his education. Following the September 11 attacks, he was one of the thousands of Muslim and Arab immigrants required to register with the government as part of the National Security Entry-Exit Registration System (NSEERS) program. When Sajuti dutifully reported for registration, he was interrogated by immigration officials and denied his right to an attorney. Sajuti’s participation in that program led directly to his deportation proceedings.

After spending 69 days in immigration detention in 2011, Sajuti obtained a stay of removal and received additional stays of removal regularly until 2017. Then, in the summer of 2017, Sajuti’s stay of removal request was suddenly denied, and he was ordered to depart from the United States by mid-October. A 70-year-old man with no way to survive in Indonesia, Sajuti sought sanctuary to save his life.

“While this is a major cause for celebration for Mr. Sajuti,” said Alaa Chaker ’20, another student on the legal team, “his story remains an all too common one for many immigrants in this country who fall through the cracks of a complex legal system with limited access to affordable, quality legal representation.”

In addition to applying for a U Visa, Sajuti’s legal team moved, in April 2018, to reopen his immigration case and rescind his final order of removal. An Immigration Judge denied that motion, and the appeal of that denial is now pending before the Board of Immigration Appeals. The Clinic is committed to continuing to work to reopen Sajuti’s case and have his removal order vacated, to vindicate Sajuti’s right to remain in the United States and live entirely free from the threat of deportation.

Students in the Immigrant Rights Clinic represent immigrants and immigrant organizations in court, before administrative agencies, and in the legislature. The clinic is based at New Haven Legal Assistance, a historic nonprofit civil legal services office whose mission is to secure justice for and to protect the rights of those residents of New Haven County unable to engage legal counsel.