The Justice Collaboratory at Yale Law School has released the first entry in its Policy Model Series, a group of concrete proposals for achieving a community-centered justice system. 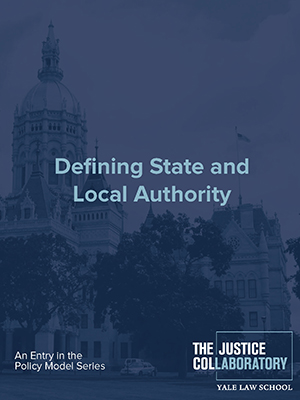 Entries in the series are concise, plainly worded, and reflect the latest thinking by leading experts. Models are intended to serve as templates for state and local laws, though their substance may also be incorporated into agency policies, regulations, and guidance.

“Policing in America, perhaps more than any other governmental function, occupies a unique place in the collective consciousness,” the proposal states. “Its triumphs and failings are the subject of daily media coverage, public demonstrations, and political debate at all levels of government, from town halls to the halls of Congress. However, calls for policy changes often fail to result in meaningful action by government officials.”

The first installment of the series focuses on defining state and local police authority. This entry offers a state legislative plan for countering three persistent obstacles to policing policy changes:

In virtually all states, the power to regulate policing is held simultaneously and with nearly equal breadth by both state and local governments, the Justice Collaboratory has found. However, the Policy Model Series notes, there is little or no coordination of effort between the two levels of government and no common understanding of which issues are best regulated locally or statewide.

The proposal notes that state-level action is critical for setting and enforcing best-practice standards across all areas of policing. Although some states have moved toward strengthening their oversight of policing, an increasing number of states have interfered with local efforts to regulate policing and public safety generally, the Justice Collaboratory has found. This is particularly prevalent when local policies conflict with the platforms of state partisans, the proposal notes. However, when wielded appropriately, state governmental authority can lead to transformative results, it continues. The model envisions an important role for state governments: overseeing all in-state police departments to ensure the uniform adoption of best practices policing.

To protect local democratic governance of policing, the model reasserts local authority over the day-to-day administration of local police departments and shields that authority from politicized state interference. In doing so, the model both defines and protects the role of local governments in regulating policing by instigating important changes to the balance of power between state and local governments.

At its core, the model aligns state law with the common expectation that police department be managed closest to where their services are administered and where grievances against them are pursued: the local level.

The model’s prescription on local authority gives local constituencies a clear understanding of where to direct their efforts when petitioning for reform while protecting the ability of local governments to shape policing to serve their constituencies’ needs.

Although the state would continue to occupy an important role in the regulation of policing, it would be obligated to respect the role of local government in administering policing and situating it within broader local public safety strategies, according to the model proposal.

The Justice Collaboratory at Yale Law School is a group of nationally recognized academics, researchers, and social scientists who have joined together to build a more just, effective, and democratic criminal legal system by advancing public policies that are scientifically proven to build strong and safe communities where all citizens can thrive.