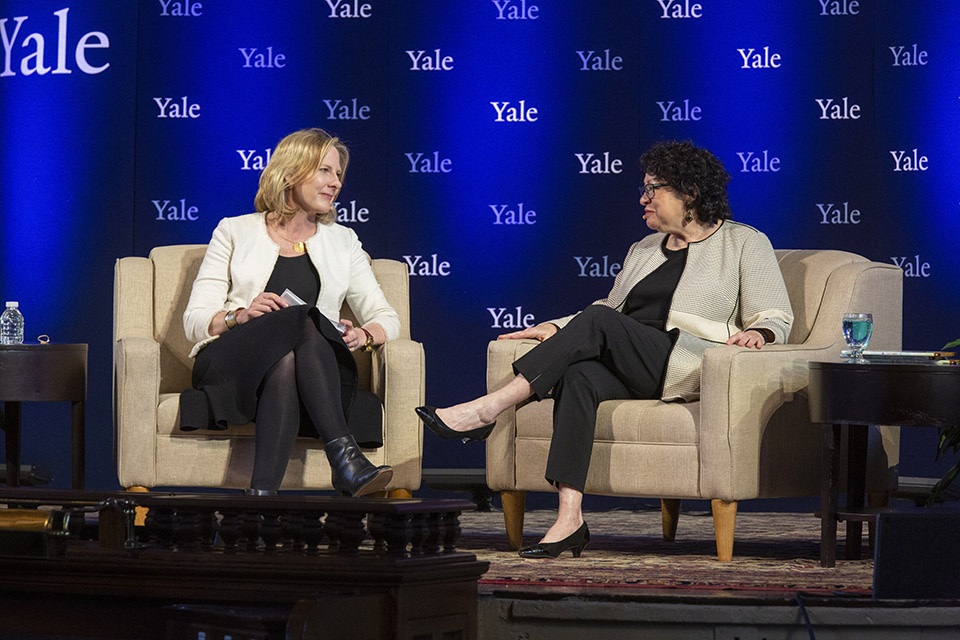 Returning to New Haven for her 40th reunion, U.S. Supreme Court Justice Sonia Sotomayor ’79 spoke to a packed house at Woolsey Hall during Yale Law School’s Alumni Weekend on Saturday, October 19, 2019. In an engaging conversation with Dean Heather Gerken, Justice Sotomayor spoke personally about her road to becoming a lawyer, her passion for inspiring young children, and how she views the Court and her role on it today.

The event was part of Yale’s yearlong celebration of the 150th anniversary of women’s enrollment at the University and the 50th anniversary of coeducation at Yale College. Kimberly Goff-Crews ’86 JD, Secretary and Vice-President of Student Life at Yale, welcomed Justice Sotomayor and Dean Gerken to the stage as women trailblazers of Yale Law School.

WATCH VIDEO OF THE CONVERSATION 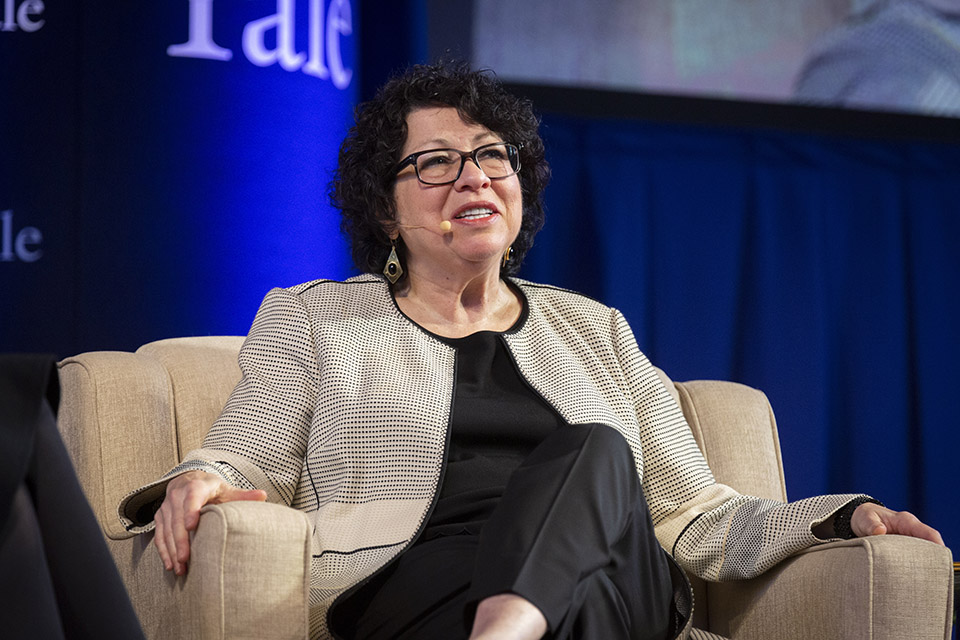 Dean Gerken began the conversation in front of more than 1,400 people by thanking the Justice for staying past midnight to meet with the Law School’s first-year Latinx students, who Justice Sotomayor called “truly amazing.”

The conversation then turned to the Justice’s new children’s book, Just Ask. A diabetic since childhood, Justice Sotomayor described the impetus behind the book— to encourage children who have different life conditions to begin conversations with their peers instead of feeling ashamed, a lesson that the Justice discovered for herself as an adult. Justice Sotomayor told the crowd that she will inspire as many children as she can to believe that they can change the world for the better. “It’s the book of my heart,” she said of the New York Times bestseller. Several children in the audience had brought copies for the Justice to sign, and they were greeted warmly by the Justice as she left the stage and walked the aisles during her conversation with the Dean.

When asked about feeling different as she entered the Ivy Leagues, Justice Sotomayor described arriving at Princeton — after her upbringing in the Bronx — at a time when there were few women and even fewer Latino students. She noted how it was like being introduced to a world that she had never known existed. From that moment forward, she said, she felt she had a foot in two worlds.

After graduating from Yale Law School, Justice Sonia Sotomayor served as Assistant District Attorney in the New York County District Attorney's Office from 1979 to 1984. The Justice told Gerken that she was inspired, and then hired, by the late Robert Morgenthau ’48 LLB to serve in this role after he told her how much responsibility and on the job training she would receive. She urged both graduates and students of Yale Law School in the audience to plan to do something that interests and excited them, but not to be afraid of acknowledging when they have made a career mistake. “One of the wonders of being a lawyer is: you can change paths at any time. You’ll just make a lot less money,” she quipped, to audience laughter.

After her time as a District Attorney, Justice Sotomayor litigated international commercial matters in New York City at Pavia & Harcourt, where she was an associate and then partner from 1984 to 1992. In 1991, President George H.W. Bush nominated her to the U.S. District Court, Southern District of New York, and she served in that role from 1992 to 1998. She then served as a judge on the United States Court of Appeals for the Second Circuit from 1998 to 2009. President Barack Obama nominated her as an Associate Justice of the Supreme Court on May 26, 2009, and she assumed this role August 8, 2009.

As the conversation turned to the court today, Justice Sotomayor explained her judicial philosophy, telling the audience that it is not possible for her to ignore the human consequence of her ruling, so she works intently to evaluate the consequence of both sides. As Gerken reminded Justice Sotomayor of her reputation for intensity on the bench, she admitted, “I am a hot bench because I want them to convince me… I’m trying to ‘attack’ them to ensure that I’m getting their best argument.”

Dean Gerken and Justice Sotomayor also discussed the role of the Court and how she thinks about judging in the midst of such deeply polarized times.

“I don’t think it matters what your politics are these days; everyone hates the level of political polarization that we have at the moment, and it puts a lot of stress on institutions that imagine themselves as above the political fray,” said Gerken. “How do you think about judging in times that are so deeply polarized?”

Justice Sotomayor responded that she hopes that all who criticize the Supreme Court for its partisanship remember that “we are the only government institution where the people like each other, despite disagreeing — and disagreeing vehemently.”

“Have you seen our writings?” she asked. The Justice explained that when their debates get heated, and lines have been crossed, other Justices encourage the parties to call and apologize. Sotomayor said she has both received and made those phone calls.

“We are friends. We are a family. We treat each other that way,” said Justice Sotomayor.