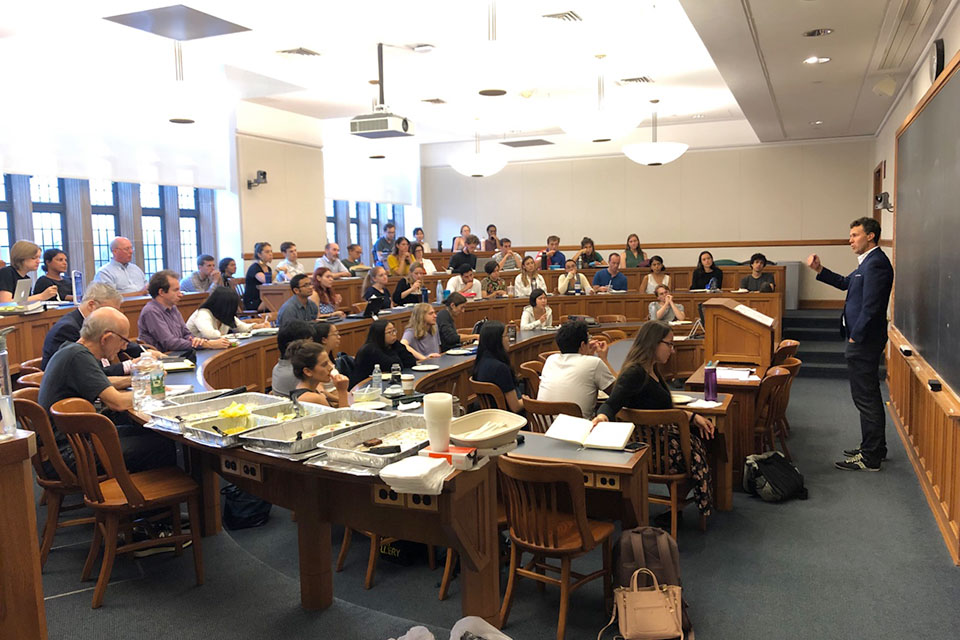 Justin Marceau spoke to students in the Animal Law course about how state laws criminalizing animal cruelty operate in practice.

The Law, Ethics & Animals Program (LEAP) at Yale Law School hosted Justin Marceau, Professor of Law at University of Denver, for a discussion of his new book, Beyond Cages: Animal Law and Criminal Punishment (Cambridge University Press, 2019). The event was cosponsored by the Yale Center for the Study of Race, Indigeneity, and Transnational Migration.

In Beyond Cages, Marceau critiques the alliance between U.S. animal welfare organizations and the prosecuting state. For decades, animal welfare groups have argued that more prosecutions and longer sentences for individuals accused of animal cruelty are key to protecting animals and elevating their importance in society. Marceau describes the hypocrisy of what he terms “carceral animal law”: the use of strategies including imprisonment, privatized prosecution, and targeting individual actors. He argues that the animal welfare movement must instead focus on systemic solutions, and offers new insights into how the lessons of criminal justice reform can be applied in the context of animal abuse cases.

In his talk, Marceau discussed the historical notion of criminal sentencing as a means of expressing communal moral values. He described the disconnect between the professed goals of the animal welfare movement and the realities of its historic support and use of “tough on crime” strategies, including longer prison sentences, prosecution, and deportation to target individuals accused of animal abuse. He challenged students to consider which values are actually being reinforced when regressive social policies are used to advance a progressive vision of social reform.

“The social project of un-caging and protecting animals is discordant and sits uncomfortably with the pursuit of more incarceration,” Marceau writes in his book. “More cages do not beget more empathy or less systemic violence. It is time to look Beyond the Cage, and to engage efforts to combat all oppression and inequity.”

Following the public talk, Marceau spoke in more depth with students in Yale Law School’s course on Animal Law about how state laws criminalizing animal cruelty operate in practice. He hopes that that after identifying the “connective tissue” linking these issues, scholars and professionals in multiple fields will work to identify and develop strategies to address the root causes of cruelty.

Marceau is Professor of Law and Animal Legal Defense Fund Professor of Law at the University of Denver. He has been retained as an expert witness in the fields of criminal law and animal law, and has published leading articles in both disciplines. He is the inaugural chair of the Scholars Committee for the Brooks Institute for Animal Rights Law and Policy, and the current chair of the Animal Law Section of the American Association of Law Schools (AALS).

The Law, Ethics & Animals Program (LEAP) is a new initiative at Yale Law School that leads and coordinates a diverse program of activities. It seeks to contribute to defining, expanding, and advancing the field of animal law. Among recent and upcoming speakers are Angela Fernandez, Jonathan Lovvorn, Jennifer Jacquet and Becca Franks.