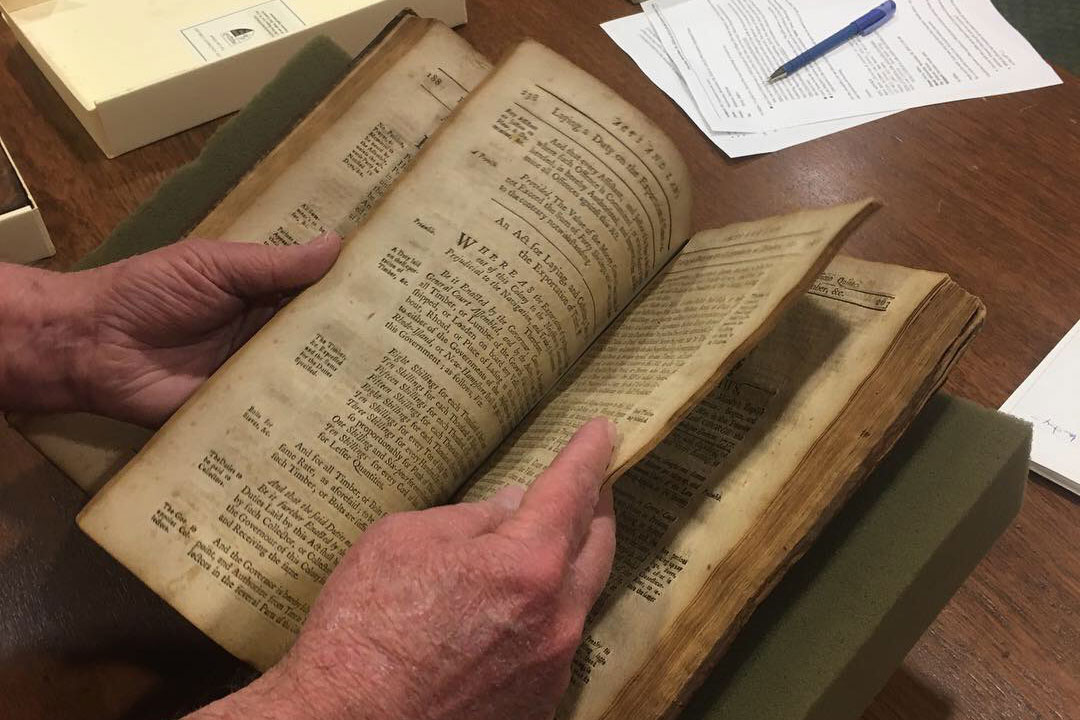 The Lillian Goldman Law Library has (re)acquired two historic 18th-century books, bringing them home to the Law School 145 years after they last left.

The volumes were sold by the Law School as duplicates on January 30, 1873 and recently returned as a gift from the estate of John Edwin Ecklund ’41 via his widow Constance Ecklund. 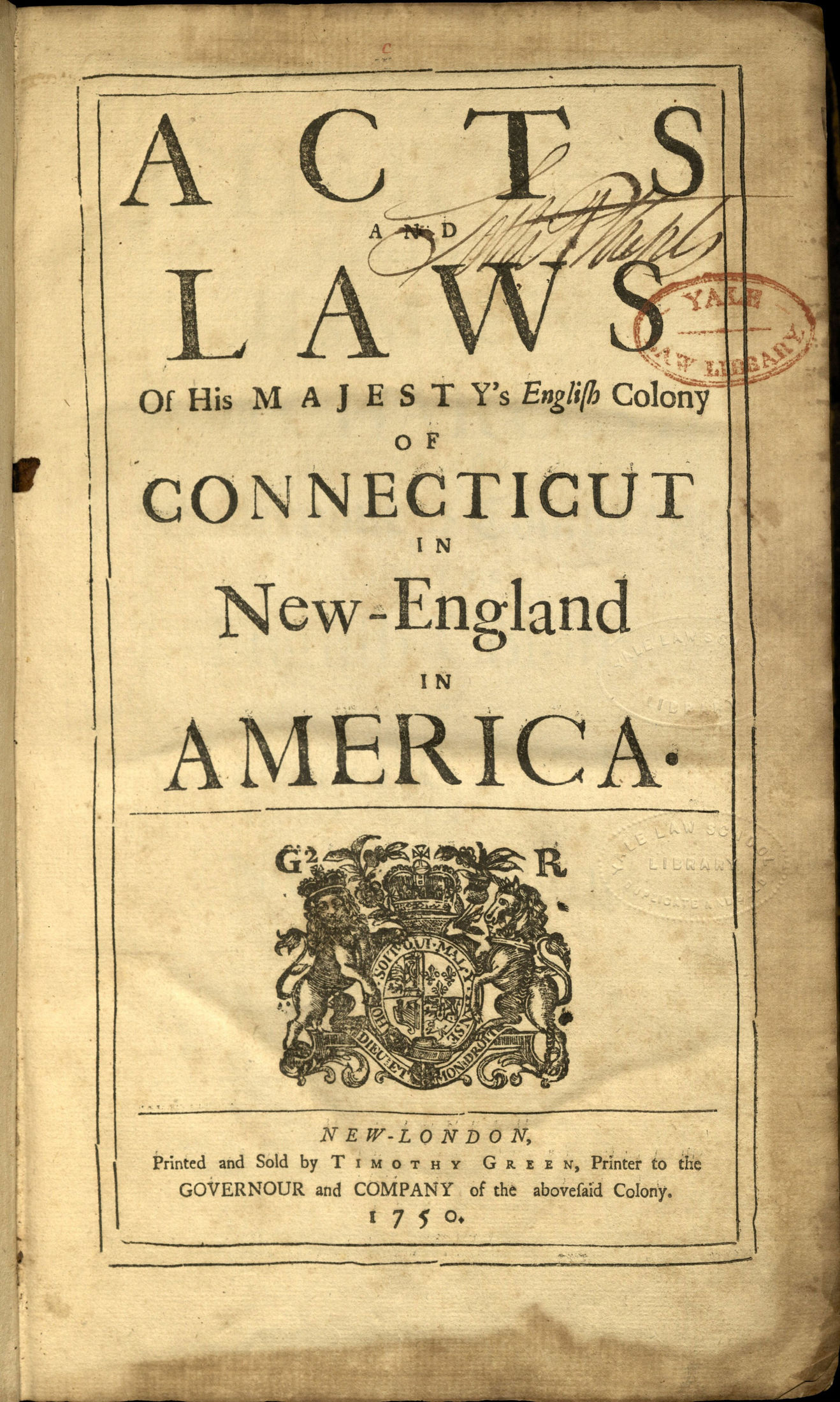 The first book, Acts and Laws of His Majesty’s English Colony of Connecticut in New-England in America was published in 1750 by printer Timothy Green in New London, CT, then the center of most printing in the state. The book bears the signature of Law School founder Seth P. Staples (1776–1861), the first instructor of the private law school that would become the Yale Law School.

The other volume, Acts and Laws of the State of Connecticut, in America, was published by Timothy Green in 1784, the first compilation of Connecticut state laws following independence. On its title page is the inscription of Samuel J. Hitchcock (1786–1845), Staples’s law partner. The title page also bears the (crossed-out) signature of Samuel Bishop (1723?–1803), the book’s first owner, who served as mayor of New Haven, chief judge of the county probate court, justice of the peace, town clerk, and Collector of the Port of New Haven.

Despite their original publication dates, the books were added to as new laws were passed over the years to keep them up to date. It’s unknown when or how Ecklund first acquired the books, which bear the oval red stamp of the Yale Law Library. According to Law Library Rare Book Librarian Michael Widener, Ecklund had a longstanding interest in legal history as well as his connections with Yale and New Haven.

Both volumes bear identical inscriptions inside marking the exact day they were deaccessioned from the library in the hand of none other than Simeon E. Baldwin, professor at the Law School for 50 years and the Law School’s Treasurer for over a decade:

The timing is no coincidence. In 1869 the Law School nearly closed after the death of Professor Henry Dutton. According to Widener, Platt was in charge of organizing the school’s new library, and he and Baldwin were two of the young faculty members enlisted to aid in rejuvenating the school.

The New Haven bar association helped ensure the school’s survival and it was decided that the third floor of the new County Court House building on Church Street next to City Hall would be reserved for the Law School and its library. According to Widener, the library began moving into its new home in January 1873 after the completion of the courthouse, and it was at this moment that the volumes left the library. Classes were first held in the new courthouse building on February 12, 1873, according to Frederick C. Hicks’s Yale Law School: 1869–1894 Including the County Court House Period (New Haven: Yale University Press, 1937). The new library contained shelving for 6,000 volumes.

Though the books were sold as duplicates in 1873, and today the Law Library owns several other copies of the same volumes, “these aren’t really duplicates,” Widener said. The individual volumes’ history, provenance, and the signatures by Baldwin, Staples, Hitchcock, and Bishop, make the books unique in the Library’s collection.

Though brittle and fragile from heavy use and age, the two books are “the earliest evidence I have seen of weeding the collection,” Widener said in his blog on the Law Library website. The Law Library’s original collection wasn’t always cherished as an important piece of the early history of the Law School, and it was Hicks who began to form the Founders Collection of original volumes from the library. The original collection of 2,260 volumes had dwindled to 386; the addition of the Ecklund gift bring that number to 430.

Ecklund, who died in 2000, had a long career as a prominent New Haven attorney as a partner at Wiggin & Dana and then served for more than a decade as treasurer of the University. A two-volume work he wrote, The Origins of Western Law from Athens to the Code Napoleon, was published posthumously in 2014 and was edited by his widow Constance.

“These books and their unique annotations help to tell the story of the early history of the Law School, as well as the history of law in 18th-century Connecticut,” said Widener. “We are very pleased to have them back home.”