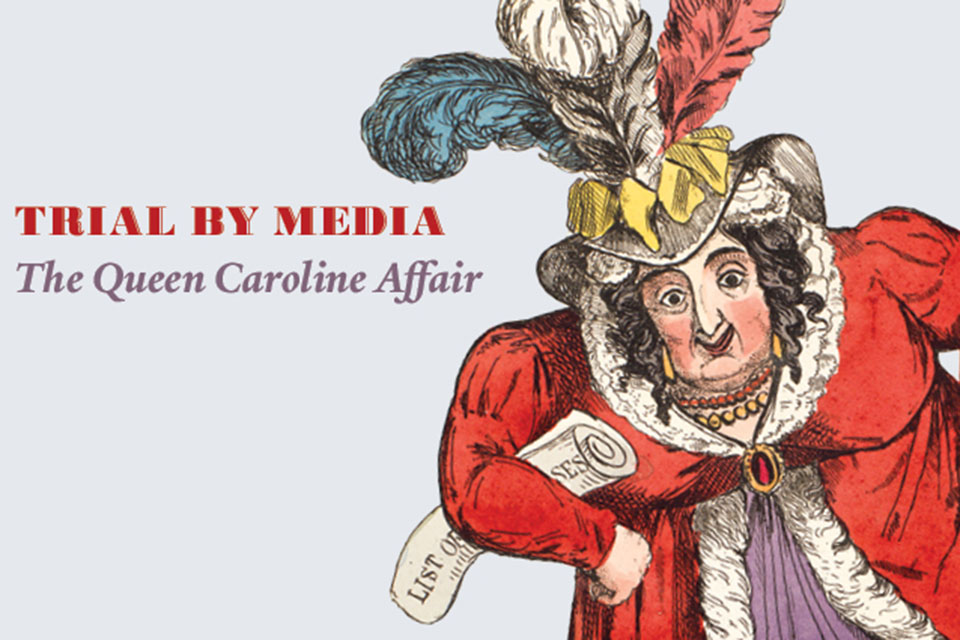 Two centuries ago Queen Caroline of England was put on trial for adultery by her husband George IV, provoking an unprecedented media frenzy. Two Yale University libraries, the Lewis Walpole Library and the Lillian Goldman Law Library, are marking the bicentennial of the trial with a joint exhibition, “Trial by Media: The Queen Caroline Affair.”

The colorful exhibition is on display September 9 through December 19, 2019 at Yale Law School. It is co-curated by Cynthia Roman, Curator of Prints, Drawings, and Paintings at the Walpole, and Mike Widener, Rare Book Librarian at the Law Library.

Drawing on the Lewis Walpole Library’s strengths in graphic satire and the Law Library’s collections of trial accounts and illustrated legal texts, “Trial by Media” examines the role of print media in documenting the Queen Caroline affair and shaping public perceptions. The items range from mocking caricatures to political screeds and sober, journalistic accounts. Today these sources serve as a lens for studying gender roles, class divisions, publishing, political satire, and British politics.

In connection with the exhibition, there will be a mini-conference the afternoon of October 4, 2019 at the Law School, with panels focusing on the legal and media aspects of Queen Caroline’s trial. An online version of the exhibition is under preparation. In addition, many of the Law Library’s holdings on the Queen Caroline trial are represented in an album on the Rare Book Collection’s Flickr site.

“Trial by Media: The Queen Caroline Affair” is on display in the Rare Book Exhibition Gallery of the Lillian Goldman Law Library, located on Level L2 of the Yale Law School at 127 Wall Street in New Haven. The exhibition is open to the public 10 a.m.– 6 p.m. daily, and open to Yale affiliates until 10 p.m.