Leadership Lessons from the Pandemic 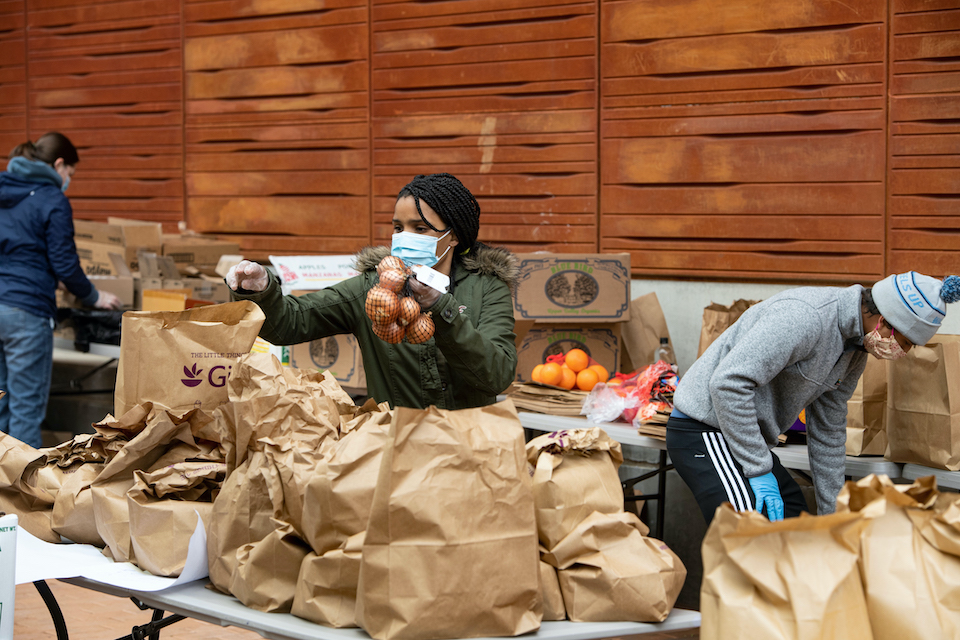 Johns Hopkins University strengthened connections to the city of Baltimore through its food distribution program. The University’s president is Ron Daniels ’88 LLM.

When he took office in 2009, Johns Hopkins University president Ron Daniels ’88 LL.M. never imagined he would be responsible for steering the institution through a once-in-a-century pandemic that upended every aspect of its work: research, education, clinical care, and community engagement.

Yet he knows he’s not alone in navigating the complex issues posed by COVID-19: “Anyone who leads an organization of any type, public or private, has been mightily challenged by the pandemic,” he said.

That’s something Carmela Castellano-Garcia ’91, Sarah Esty ’16, Henry Fernandez ’94, and Art Ochoa ’95 would surely agree with. They, like Daniels, have spent the last year in leadership positions in some of the sectors most affected by the crisis — health care, education, and government — and all have grappled with the responsibility of helping their organizations weather the storm.

But for all the challenges they have faced, these alumni have also found the pandemic to be a powerful, if unwelcome, teacher, helping them discover the resilience within the institutions and teams they lead — and themselves. And all have found the relationships, skills, and habits of mind they cultivated at the Law School to be anchoring forces in a tumultuous time.

“You take what comes your way,” Daniels reflected. “Trying to meet the moment — I think that’s the obligation of leadership.”

For Daniels, meeting the moment meant not losing sight of what Johns Hopkins does best. “I’ve found it’s so important to keep your eyes trained on the core mission and continually return to what matters most,” he said.

That involved finding safe and creative ways to continue the institution’s most vital functions. For instance, the university decided to allow scientists, especially those doing COVID-19-related research, to continue their efforts, even as most other aspects of the university’s work went virtual. And at a time of budgetary constraint, John Hopkins doubled down on its commitment to the city of Baltimore, creating a fresh food program that served millions of meals over a 20-week period.

In this way, rather than distracting from his work, Daniels believes the pandemic offered him a chance to “[deepen] the impact and the strategic contributions of the institution. This is not knocking you off your game, it’s helping you become a better and truer institution.”

Like Daniels, Henry Fernandez found himself thinking intently about the core values of his organization  —  Leadership, Education and Athletics in Partnership (LEAP) — as he considered how to navigate the public health emergency. LEAP, which Fernandez co-founded in 1992, provides a variety of year-round education, leadership, and mentoring programs to youth in New Haven.

Some of LEAP’s work was relatively easy to translate to a virtual format. But much of it is “fundamentally high-contact,” Fernandez said: swim and music lessons, dance classes, and the like. He also recognized that, in the throes of the crisis, kids needed the things that only in-person programming could provide — camaraderie, movement, fun — more than ever.

This was the challenge Fernandez and his team weighed as they considered how to approach LEAP’s popular summer camp. “It really went to our values, in the sense that we knew it was important for child health to try to run a program if we could, and we knew that our values also said we had to run the safest program possible,” he said.

In the end, LEAP did offer a summer camp with an in-person component — with lots of testing, masks, distancing, sanitizing, and contingency planning for what to do if a camper or counselor got sick. “To make a high-quality camp experience accessible in the midst of COVID...I think was a great decision, and it worked out well. But it took a lot of work,” he said.

As Fernandez and Daniels discovered, it’s essential to stay focused on the core mission in a crisis — but it’s not easy. Pulling it off, they and several other alumni discovered, takes the help of an entire team.

“Having a great team already in place is so, so important,” said Sarah Esty. She was, until February, the Senior Deputy Director for Policy and Planning at the Michigan Department of Health and Human Services (MDHHS) and now teaches at the University of Michigan Law School.

Esty originally arrived at MDHHS tasked with improving the state’s Medicaid behavioral health system. But when the pandemic hit, she was given a new and entirely unfamiliar set of projects, including creating a COVID-19 information hotline and inbox, supporting the construction of a field hospital, and helping to draft the state’s emergency public health orders.

Fortunately, she had spent time getting to know not just her own team, but others across the department. When it came time to set up the state’s COVID-19 information hotline, for example, she knew that a colleague from another department had experience running call centers — a background that proved invaluable as they quickly retrained state employees from across MDHHS to field more than 200,000 questions from the public.

As soon as the hotline was up and running, Esty was on to next project. Throughout the pandemic, “my goal was always to build something, then get it to a steady state, and have...all my lieutenants ready to take over for me,” she said. “And as soon as they stepped up to leadership, I would tell them, ‘You start training your replacements as well, because two weeks from now, I’m going to need you to leave this project and come with me to my next thing.’”

With CPCA’s in-person trainings out of the question, and much of its dues-paying membership in financial freefall, everything had to change — and she couldn’t have done it alone. Fortunately, Castellano-Garcia had spent the last several years working on training and promoting new leaders within CPCA, an investment that proved invaluable when the crisis hit. Her team “took the bull by the horns” and helped her trim the budget while avoiding layoffs and move CPCA’s conferences and trainings to a virtual format.

A culture of compassion

If having the right people is essential in crisis, so is caring for them. That’s something Art Ochoa has kept at the front of his mind throughout the pandemic.

As senior vice president for advancement at Los Angeles’s Cedars-Sinai, Ochoa and his team had to adjust to a constantly changing landscape. At the beginning of the crisis, in an effort to conserve the hospital’s supply of personal protective equipment, they had to tell patients to delay nonessential procedures; then, by the summer, they had to convince the community it was safe to return for care. Communicating those changing messages took the “almost 24/7 work,” he said, of his marketing and communications staff.

Yet Ochoa knew that those same staff members were facing enormous personal challenges. Employees were working from home alongside spouses, children attending school by Zoom, and parents or other family members who needed care. And, of course, “there was a lot of fear,” Ochoa said — of illness, of job loss, of what the future might hold. “I just encouraged everybody to be as kind and as generous and as flexible as possible.”

That culture of compassion was on display throughout Cedars-Sinai, as the hospital retrained and repositioned workers rather than laying them off. “I think that’s the kind of thing that builds loyalty,” said Ochoa.

To Castellano-Garcia, taking care of her team also meant focusing on diversity, equity, and inclusion, as COVID-19 and police violence brought the mortal danger of racism into stark relief. Within CPCA, she hired a consultant to help the organization make internal changes. “We had talked about bias, but we had not talked about racism, and we really needed to — and to recognize our own policies that were not helpful to having a diverse staff,” she said. In addition, CPCA created new offerings for its members, including task forces focused on how community health centers can help combat racial health disparities.

While Castellano-Garcia, Daniels, Esty, Fernandez and Ochoa are not practicing law, all say they’ve drawn on their time at the Law School to help them through the pandemic.

In Fernandez’s case, the connections are direct and tangible: he cofounded LEAP during his time at Yale, and Law School faculty members past and present have been active supporters of the program, offering financial support, office space, and time.

His legal training also helped him think about how to “balance the law with the needs of the community,” he said. If the law was constricting certain aspects of LEAP’s work, he felt empowered to try to solve the problem. “Yale Law was particularly helpful in not having me think of the law as the endpoint, but as the beginning. It’s something that can be changed when you need to change it.”

For other alumni, it’s the intellectual skills they learned at the Law School that have proved most valuable.

For Castellano-Garcia, the “strength and resilience” she gained as a law student have allowed her to maintain her confidence in the midst of a crisis. Coming to Yale from California as one of few Latinx students was not easy, but she still managed to thrive. “My experience at Yale showed me that I could adapt to anything in any kind of environment and be successful,” she said — even an environment as difficult as a global pandemic.

For Ochoa, it’s the ability to remain calm. “One of the things that we’re taught in the law to do is not to panic,” he said, “and to analyze every problem and break it down into its constituent and attendant parts.” That’s always useful, but particularly in a crisis that offers few easy answers.

Having the wherewithal to navigate such uncertainty is something Daniels also took from his time at the Law School, where many of the discussions focused on complex gray areas. “Your ability to operate with a sense of principle in the gray zones, where you’re dealing with competing goals, priorities, values — that capacity, I think, really draws upon good legal training.”

And uncertainty can be, in its way, exhilarating, as Esty discovered. Operating without a playbook gave her the chance to engage in the kind of problem-solving she always hoped she’d end up doing when she came to YLS. Her work at MDHHS used every aspect of her legal training — “the policy training, the statutory training and just the general ‘thinking like a lawyer’ training that you can apply to anything. I think this really tested those limits and proved very much the value of all of that experience.”