Learning About Law and Tech, Hands (and Headsets) On 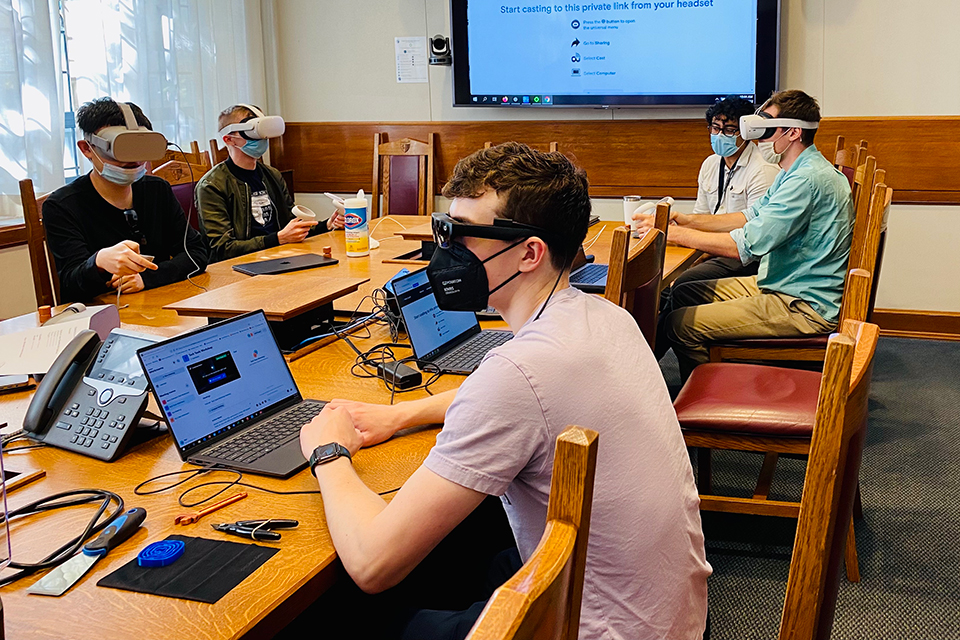 Students try out virtual reality headsets and discuss the possibilities of incorporating virtual reality into evidentiary proceedings or meeting with clients in the metaverse.

This fall, in a classroom at the Lillian Goldman Law Library, Jerry Ma ’25 sat with a virtual reality headset strapped to his head, thinking about the future of the law.

“It’s one thing to read a bunch of blog posts or law review articles about how these different technologies might influence the course of legal thought or practice,” he said, “and another thing entirely to slap on a VR headset and see for yourself.”

These are the moments that Law Librarian and Professor of Law Femi Cadmus wanted to create in her new experiential class, Technology in the Practice of Law. Simply put, Cadmus said, “the goal is to build up technologically competent lawyers.” That means not only familiarizing students with the tools and software they’ll have to know as attorneys navigating today’s hybrid work culture, but also encouraging them to think deeply and broadly about how technology and the law influence one another.

“It’s practical and doctrinal,” she said. “We connect both.”

Cadmus approached the class as an important extension of her role as a law librarian.

“Typically, we teach legal research, because the best lawyers are usually the best researchers,” she said. “But we have not been teaching the technology component.”

It’s an essential gap to fill now that technological fluency and research skills are so tightly coupled, Cadmus explained. And just because young lawyers have grown up with technology doesn’t mean they always understand how it works under the hood.

She sought to make Technology in the Practice of Law as hands on as she could, bringing in guest speakers, allowing students to test drive AI-driven knowledge management and analytics platforms — and, yes, giving them some time to play around with those VR headsets, all while talking about the possibilities of incorporating virtual reality into evidentiary proceedings or meeting with clients in the metaverse.

“I saw them having fun — and then evaluating the devices and the implications for introducing that technology in the practice of law,” Cadmus said. “It was that intersection of the very practical and fun with the very serious implications that made this class a joy.”

For Brett Greene ’23, the direct applicability of the class to his future work — he plans to practice tax law after graduation — was especially welcome. Not only did he and his fellow students get a chance to use software that will likely be part of his everyday life as an attorney, he met the people who help administer that software for law firms and contemplated the larger issues posed by the technology.

For example, “if all of your client’s files are kept in the cloud, legal ethics rules mean you have a responsibility to make sure they’re secure,” Greene said. “This is something that I, as a future lawyer, have an affirmative obligation to learn about.”

Greene’s final project focused on AI-assisted legal bill review, an increasingly common practice among both firms and clients. Understanding how the software works gave him insight into how to be most effective in the future.

“Billing is obviously very important to legal practice,” he said. “If the software is flagging vague billing entries, what can you do to make clear the value added in each billing entry? That’s important for the firm.”

“I think the benefit of courses such as this is you’re not at the level of abstraction that a lot of law school doctrinal or theoretical courses operate on,” he said. “You are actually learning about a specific thing that you can feel and touch and experience as an end user.”

He was especially intrigued by the course sessions that covered AI and machine learning.

“AI models can do things that even six months ago, I would have told you we’re at least a decade away from that level of ability,” he said.

With machine learning software now able to closely mimic human writing — including legal writing — lawyers “are not going to be able to just stay in our lane and focus on the autonomous body of doctrine,” Ma said. “Whether we like it or not, we’re going to have to contend with what emerging technologies are going to bring to bear on the legal sector,” and he’s thankful Yale Law School has “a class exploring exactly what I just described.”