American Conservatives’ Pilgrimage to Hungary is a Joke — A Commentary by James Q. Whitman ’88 The Los Angeles Times 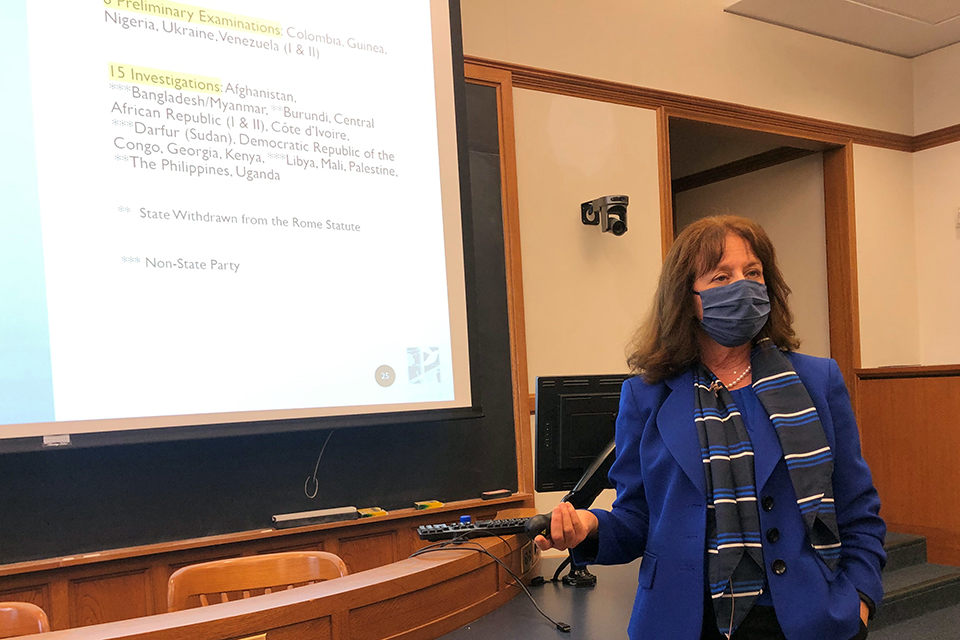 Prosecuting crimes against humanity can prevent them from escalating into war crimes or genocide, Sadat said at her Oct. 20, 2021 talk.

Leila Nadya Sadat spoke to a Yale Law School audience on Oct. 20, 2021 about the importance of prosecuting crimes against humanity in international law. “They have a pivotal role in atrocity prevention,” argued Sadat.

Sadat, a Visiting Scholar at Yale University during the fall term, is a professor of international law at Washington University in St. Louis and the Special Adviser on Crimes Against Humanity to the International Criminal Court Prosecutor. She spoke in her personal capacity, not on behalf of the Prosecutor. Sadat also directs the Crimes Against Humanity Initiative, a project that was a focus of her talk. The Initiative was founded to write the first global treaty on crimes against humanity.

“Shockingly, there is no treaty on crimes against humanity despite there being so many other international instruments,” Sadat explained. For terrorism, corruption, and even cutting submarine cables, there are treaty mechanisms offering “horizontal systems” for addressing crime. No equivalent system exists for crimes against humanity, Sadat said.

The history of crimes against humanity can be traced back to the 19th century, but they really became prominent in 1945 during the Nuremberg trials, Sadat said, when Nazis were prosecuted for their crimes during the Holocaust. Since then, she continued, there has been “piecemeal codification” of crimes against humanity through several international treaties. The most prominent of these is the Genocide Convention, she noted — “the one we think about when we think about mass atrocity.”

The contemporary definition of crimes against humanity comes from the 1998 Rome Statute that established the International Criminal Court (ICC). Sadat, who was in Rome when the Statute was adopted, said “it was a miracle of accomplishment.” She continued, “Because [the ICC] is a court that’s permanent and operates in real time…it’s a totally different situation from what we’ve seen before.”

For Sadat, crimes against humanity are especially critical to the ICC’s capacity for prevention. Sadat identified an “atrocity cascade,” describing how human rights abuses increase in severity. A situation that begins with human rights violations can develop into a case of crimes against humanity, then war crimes, then genocide, she said. “This is where the court works in real time,” Sadat explained. “We can take human rights violations that escalate up to a certain level without waiting for armed conflict to break out.”

“We convinced most people that there was a real legal and impunity gap,” she said.

Sean D. Murphy, the United Nations Special Rapporteur on Crimes Against Humanity, helped bring the Initiative’s mission to the U.N, according to Sadat.

“Over six years, Special Rapporteur Murphy convinced his colleagues to draft their own treaty on this,” said Sadat. The U.N. draft treaty was first submitted for governments’ comment in 2017. To Sadat’s surprise, during and since that round of feedback, states have widely supported the treaty. Nevertheless, the opposition of a powerful minority has so far prevented its adoption, she said. Adoption requires a unanimous vote, Sadat explained, and Russia and China are staunch “no” votes.

The Initiative’s current strategy, said Sadat, is to track states’ opinions on the treaty in order to document the broad support it enjoys. She highlighted in particular the work of Yale students involved with the Lowenstein Project, who are contributing to that tracking process. Despite the obstacles, Sadat is “determined to put an end to impunity for the perpetrators of these crimes and thus contribute to prevention.”

Sadat’s talk at the Law School was sponsored by the Schell Center for International Human Rights.