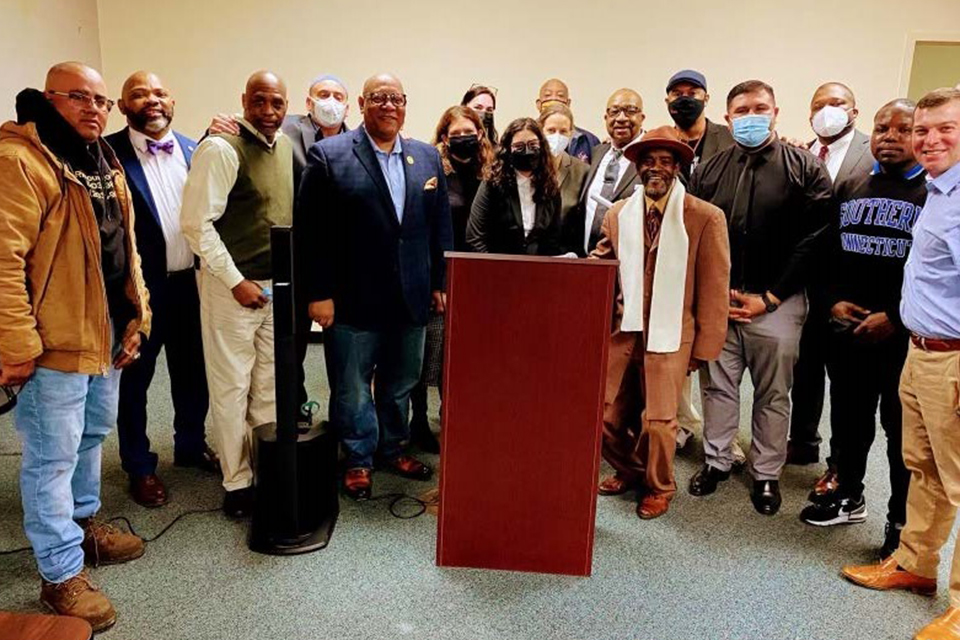 Liman Center students, state officials, and community partners called for a repeal of Connecticut’s incarceration lien law at a press conference in Bridgeport on Feb. 17.

Students with the Arthur Liman Center for Public Interest Law joined state Sen. Gary Winfield, state Rep. Steve Stafstrom, and community partners at a press conference on Feb. 17 to call for a repeal of Connecticut’s incarceration lien law, which charges people in prison and jail for the costs of their incarceration.

The lien imposes a debt burden on individuals in custody for the period of their incarceration at a current rate of up to $224 a day, according to studies from the Liman Center. Under this law, Connecticut can take up to 50% of any inheritances or damages awarded in lawsuits from someone who has been incarcerated.

Mila Reed-Guevara ’23, Student Director of the Liman Center, has been doing research on the law for the past year through a Liman Center project on “pay-to-stay” provisions for people in Connecticut jails and prisons. She explained that the lien, which can last for up to 20 years after someone has been released from prison, holds the threat of collection over the heads of people who are transitioning back into society.

“It demeans their dignity as free persons living in our communities,” Reed-Guevara said.

Liman Center Director Jenny Carroll emphasized the harmful impacts of the law on the people of Connecticut.

“The lien disproportionately burdens economically marginalized individuals, creates barriers to successful reentry into the community after periods of incarceration, and carries intergenerational economic and health burdens,” she said.

The press conference is one of several ways in which the Liman Center’s project is delving into and bringing critical attention to the incarceration lien, Carroll said. As the repeal proposal makes its way through Connecticut’s legislative process, students will continue to work with coalition members to prepare testimony for hearings scheduled for March.

Liman Projects offer Yale Law School students an opportunity to collaborate on research to generate reform in criminal and civil legal systems. These projects are a component of the Liman Center, which promotes access to justice and the fair treatment of individuals and groups seeking to use legal systems.