The Liman Center’s Colloquium 2018: Who Pays? Fines, Fees, Bail, and the Cost of Courts 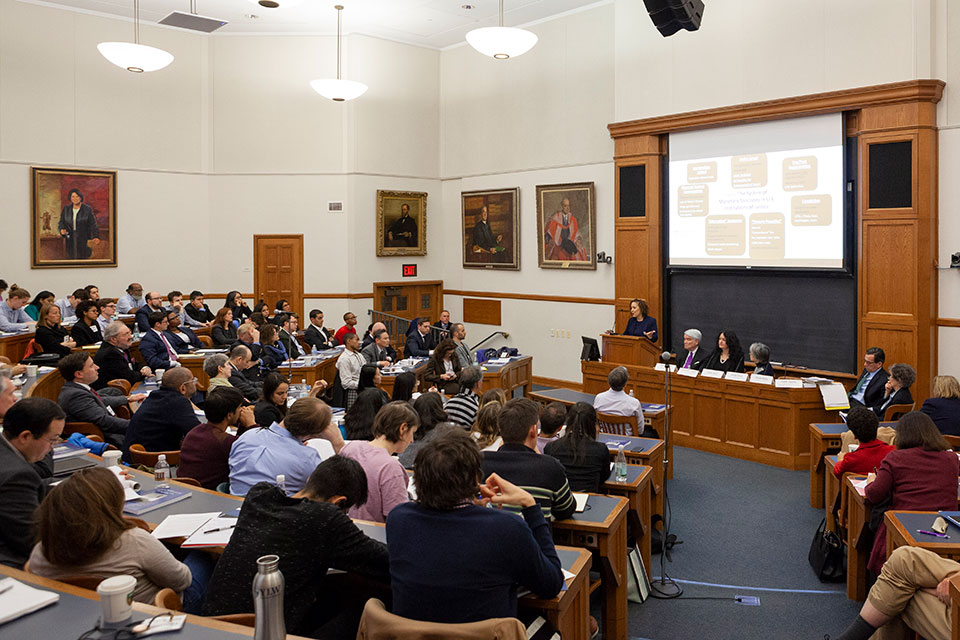 The challenges of poverty haunt the legal system. In many jurisdictions, courts themselves are underfunded, as are large numbers of litigants who appear before them. Pressures for change are coming from many vectors, as growing numbers of people seek to use the courts; government budgets decline; and arrest and detention rates remain high. New technologies provide some ways to streamline services through on-line systems but also offer new techniques to expand state control through electronic monitoring.

These problems have garnered a good deal of attention and prompted litigation and reform efforts. In the last few years, several states have chartered task forces to understand the costs of their system and the ways in which courts themselves are sources of debt for many users. Research projects on these many “legal financial obligations” (LF0s), from bail to filing fees and fines, document their harmful impact on low-income communities and on people of color.

The 2018 Liman Center Colloquium, Who Pays for Courts?, took up the many issues raised by court and litigant financing. The goals were to understand the mechanisms for financing court systems, the dimensions of the problems, the inter-relationships among civil, criminal, and administrative processes, the impact of constitutional guarantees of due process, equal protection, and access to courts, and the opportunities for generating the political will to bring about reforms.

The problems were put into sharp relief by Professor Alexes Harris, whose 2016 book A Pound of Flesh detailed the impact of court debt on low-income individuals and how it exacerbates racial and economic inequality. Connecticut’s Governor Dannel Malloy joined Chief Justice Nathan Hecht of the Texas Supreme Court and Chief Judge Diane Wood of the U.S. Court of Appeals for the Seventh Circuit to talk about what governments can and should do. Konstantina Vagenas, Director of the Access to Justice Initiatives of the National Center for State Courts provided a glimpse of the many court-based innovations underway. Judith Resnik, the Liman Professor of Law, brought into focus the disjuncture between the constitutional commitments to open courts and rights-to-remedies, and the limited support currently provided to many seeking to use court services.

Other sessions explored facets of the problems through discussions moderated by Monica Bell ’09, a Yale Law School Associate Professor who was a Liman Fellow in 2010, and by Fiona Doherty ’99, Clinical Professor of Law at YLS and a former Senior Liman Fellow in Residence in 2011. Andrew Hammond ’14 described the wide variation in how individuals seeking fee waivers in federal courts were treated. as tests of indigency varied from district to district and sometimes from judge to judge. Nancy Gertner ’71, former judge for the District of Massachusetts and currently teaching at Harvard Law School, spoke about the relative insulation of federal district judges from the miseries of economic hardship faced by the people appearing before them.

Collection efforts to make change were at the center of several discussions. Devon Porter ’15, a current Liman Fellow, detailed the successful campaign that convinced L.A. County Board of Supervisors to drop a $50 “registration fee” for the “free” lawyers provided indigent criminal defendants. Likewise, Professor Jeffrey Selbin from U.C. Berkeley showed the pattern of fines leveled on the families of juveniles in detention, including the costs of their transportation to such facilities and of their care, which resulted in millions of dollars collected by California counties. He too had good news; working with clinic students and a coalition of groups, the state enacted new legislative, SB 190, limiting the imposition of new fees on juveniles. What is yet to be corrected are the debts already incurred. Michael Morse ’19 underscored harms also in need of redress—the disenfranchisement of thousands of people because of unpaid criminal court debt.

Money bail is a powerful example of the impact of resources on criminal defendants, and Clinical Associate Professor of Law Marisol Orihuela ’08 led a discussion of bail’s harms. Emily Bazelon ’00, N.Y. Times Magazine staff writer and a Truman Capote Fellow, provided a vivid account of one family’s struggles to support a young man subjected to intrusive oversight by bail bondsmen. At Harvard Law School’s Criminal Justice Policy Program, Mitali Nagrecha directs the National Criminal Justice Debt Initiative, and she explained the challenges of accounting for the many sources of costs. Keith Fisher, working with the National Center for State Courts, detailed model practices for judges to alter their own decision-making and impose fewer dollar costs on litigants.

Paul Heaton, from the University of Pennsylvania Law School’s Quattrone Center, explained his research on the “downstream consequences” of bail decisions. That empirical work, which was cited in the litigation challenging the bail system in Harris County, Texas, showed that criminal defendants detained pretrial were more likely to be convicted, get sentenced to time in prison, and serve longer sentences, as well as at more risk of unemployment and of losing custody of children.

Jon Wool ’96, Director of VERA’s Justice Policy Institute, focused on New Orleans, where VERA researchers have mapped the costs of “charging for justice.” Brandon Buskey, a staff attorney at the ACLU Criminal Law Reform Project, talked about how to frame legal challenges to money bail, and Professor Crystal Yang of Harvard Law School explained how bail decisions predicted on “risk assessments” focus only on the risks of release and do not systematically take into account the risks imposed on individuals by detention. Robin Steinberg explained how she had founded the Bail Project to provide funds to pay the relatively small amounts (often under $750) that are often unaffordable to defendants. Given a high compliance rate, the moneys lent to post bail can be recycled to help others leave detention.

What can and what should law do? In a panel moderated by YLS Clinical Associate Professor of Law Miriam Gohara, responses came from Professors Reva Siegel of Yale Law School, Cary Franklin of U.T. (Austin); Beth Colgan of UCLA; and Yale Law School Ph.D. candidate Danieli Evans ’12; as well as Ivy Wang ’13, former Liman Fellow, and Alex Karakatsanis, the founder of the Civil Rights Corp, both of whom have brought lawsuits on behalf of individuals harmed by bail and fee practices. The discussion focused on the scope of equal protection and due process guarantees, the role played by the Excessive Bail and Excessive Fines Clauses, and recent lower court decisions finding fines, fees, and bail practices unconstitutional.

How can practices change on the ground, with or without new constitutional rulings? One session, chaired by Professor James Forman ’92, focused on state systems. Dean Tim Fisher of the University of Connecticut and Bill Clendenen, as co-chairs of the Connecticut Task Force to Improve Access to Legal Counsel in Civil Matters, joined Cathy Malloy, a criminal justice reform advocate, and Mike Lawlor, Under Secretary for Criminal Justice Policy and Planning for Connecticut, to discuss state-wide efforts to revise fees, lower bail, limit the placement of people under age 24 in the criminal justice system, and provide better treatment for women prisoners. Stephen Pflaum ’65, chair of Illinois’s Statutory Court Fee Task Force, talked about how easy it is to use court fees to raise revenues and pending legislative reform in that state. Miriam Krinsky, Executive Director of Fair and Just Prosecution, spoke about the critical role played by local prosecutors in altering their own practices.

Alternative financing and new practices came to the fore in the discussion led by Liman Director Anna VanCleave. Economist Robert Ebel focused on the tradeoffs between general revenue and user fees. Gloria Gong ’14, Director of Research and Innovation at the Government Performance Lab of Harvard’s Kennedy School of Government, talked about ways provided examples of “performance bonds,” in which the private sector provided insurance for new techniques to implement policies. Georgetown Professor Tanina Rostain ’86, addressed both the potential and the limits of “apps” —online designs offering legal needs assessments. New nonprofit efforts were highlighted by Lisa Foster and Joanna Weiss, co-founders of the Fines and Fees Justice Center, which aims to bring to the public’s attention the need for profound reforms.

In sum, through intense exchanges, the 21st Annual Arthur Liman Center Colloquium addressed how constitutional democracies might begin to meet their obligations to make justice accessible. Access the volume of readings, Who Pays?. Additional materials can be found in the syllabus for the semester-long Liman class taught in the spring of 2018, Rationing Access to Justice in Democracies: Fines, Fees, and Bail and the Cost of Courts. Next spring, the Liman Center will continue to explore this topic in its 2019 Liman Workshop, The Costs and Contributions of Courts in Democracies: From Fees, Fines, Bail to Online Dispute Resolution and Class Actions.