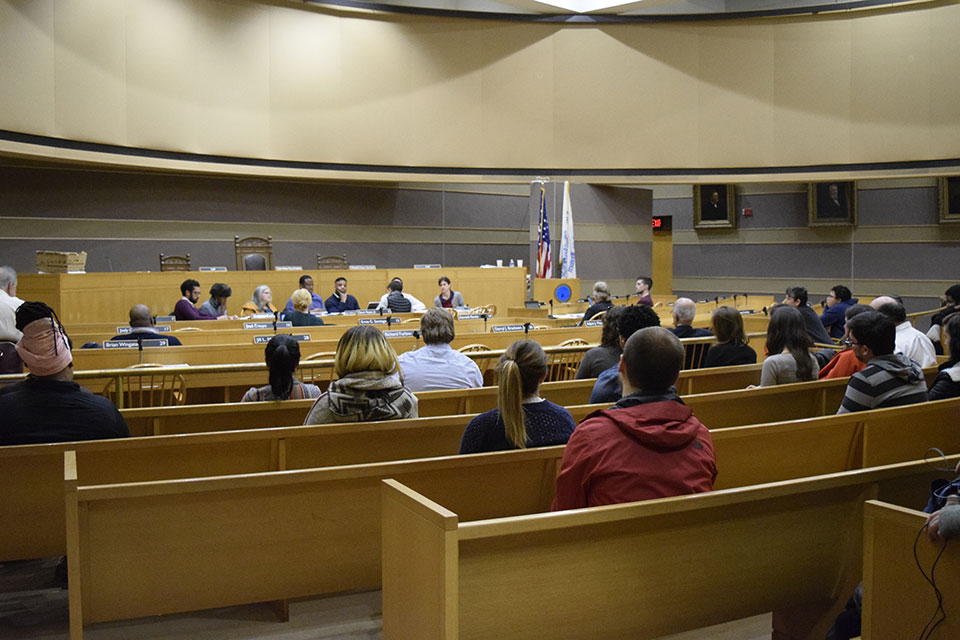 On February 5, 2019, the New Haven Human Services Committee of the city Board of Alders held a hearing on two proposals to promote the rights of the city’s homeless residents, both of which were developed with significant input from the Allard K. Lowenstein International Human Rights Clinic at Yale Law School. Former Clinic member Allison Frankel ’17, who worked on the proposals, argued at the hearing that adopting the recommendations would “make clear that lacking a home doesn’t deprive anyone of human rights.”

The two proposals, entitled “Resolution Concerning the De-Criminalization of Homelessness in New Haven, Connecticut” and the “Bill of Rights for New Haven Residents Experiencing Homelessness,” were passed unanimously by New Haven’s Homeless Advisory Commission in 2017. They have since been submitted to be considered for formal adoption by the city.

As Frankel had described the morning of the hearing in an interview on WNPR’s Where We Live, the Resolution and the Bill of Rights will together combat policies that unfairly target homeless individuals (such as park curfews or ordinances forbidding public camping) or are so vague that they promote discriminatory enforcement (such as loitering laws). According to the Clinic, such policies contribute to the criminalization of homelessness, which is on the rise nationally, according to a study of 87 cities by the National Law Center on Homelessness and Poverty. As Frankel pointed out, New Haven has more laws commonly used to criminalize homelessness than any of the other Connecticut cities in the study. “If you are homeless in New Haven,” she said, “you live under constant threat of being punished for performing necessary and life-sustaining activities.”

LISTEN: Allison Frankel ’17 on WNPR’s Where We Live

Critics of the proposals claim that they are unnecessary, given the 2013 passage of Connecticut’s “Homeless Person’s Bill of Rights.” But Frankel and Homeless Advisory Committee Chairman John Huettner both clarified that the recommended Bill of Rights for New Haven builds on the previous legislation to establish a much more comprehensive set of entitlements. According to Huettner, only five of the rights outlined in the new Bill are covered in the 2013 state statute. He also noted that the initial steps of the proposal are revenue-neutral for the city.

Huettner emphasized that the criminalization of homelessness reflects a “pervasive, cultural mindset” that falsely portrays people experiencing homelessness as threats, when in fact crimes against homeless individuals are more common than those committed by them. He said that adopting the Resolution and Bill of Rights would be the first step toward a long-term “attitudinal change,” and said that failing to implement them would “send a message” that the city condones the criminalization of some of its most marginalized residents.

Frankel added that criminalizing homelessness violates the Constitution and international law. For example, if not enough shelter beds are provided for the homeless population — which, Frankel asserted, is the case in New Haven — it is illegal to criminally punish them for exercising their only option of sleeping outside. She highlighted the court case Martin v. City of Boise, which upheld that conclusion. She also noted that “arbitrary and discriminatory enforcement” of laws against people who appear homeless is a violation of the Constitution. Drawing on her own experience living in New Haven, when she would regularly “stand idly by” outside coffee shops without ever receiving a citation, she identified loitering laws as a particularly salient example of discriminatory enforcement.

Criminalization, Frankel noted, “doesn’t address the root of the problem” of homelessness. Instead, it contributes to “a devastating cycle of streets to prison and back again.” Ending that cycle has been the primary mission of Housing Not Jails, a grassroots activist collective organized in collaboration with the Connecticut Bail Fund. Activists from Housing Not Jails have spoken out strongly in favor of the Bill of Rights. Where We Live also interviewed a homeless activist who requested to be identified by his first name, Donny, who explained that a bill of rights for homeless people would “change a lot”: it would protect his right to vote, for example, and to exist in public spaces when he has nowhere else to go. “It would mean a lot for me for everyone to have equal rights,” he said.

Huettner reiterated this emphasis on equal rights in the hearing. “This is not an anti-peace effort,” Huettner insisted. “It is a progressive, innovative approach to make sure all our citizens are treated equally and fairly under the law.”