Lowenstein Clinic Supports Lawsuit on Migrants in the Mediterranean 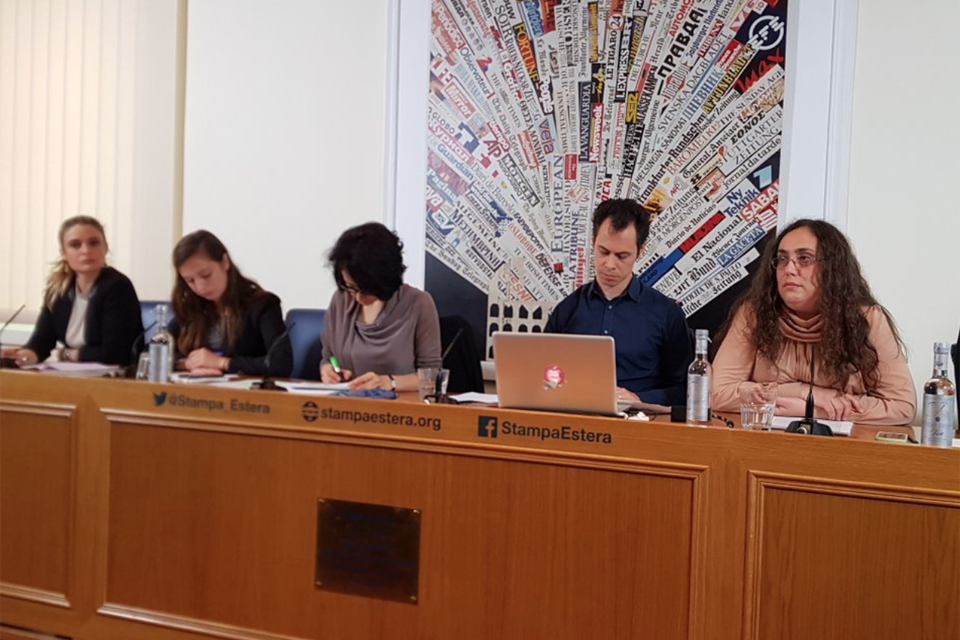 Members of different organizations at a press conference announcing the lawsuit on May 8, 2018.

Seventeen survivors of a 2017 fatal incident in which a boat carrying migrants found itself in distress off the coast of Libya filed legal action against Italy on May 8, 2018, with the European Court of Human Rights. The applicants included the surviving parents of two children who died in the incident.

The legal action alleges that Italy's collaboration with Libya to stop migrants from entering Europe has led to grave human rights violations against those crossing the Mediterranean, including torture and slavery.

The application exposes how the intervention of the coast guard follows the terms of a February 2017 formal agreement between Italy and the Libyan Government of National Accord. As a consequence of this and several other agreements, Italy has been enabling and coordinating the Libyan response at sea. The application asserts that the agreement establishes Italy’s legal responsibility for the actions of Italian and Libyan vessels in this case.

On Nov. 6, 2017, the Libyan Coast Guard interfered with the efforts of the NGO vessel Sea-Watch 3 to rescue 130 migrants from a sinking dinghy. At least 20 of them died. The Libyan vessel was donated by Italy a few months before the incident. The intervention was partly coordinated from Rome by the Maritime Rescue and Coordination Centre (MRCC), an Italian Government agency. An Italian navy ship was nearby, part of the Mare Sicuro operation, which has operated in Libyan territorial waters facilitating interceptions by the Libyan Coast Guard.

The Libyan Coast Guard ‘pulled back’ the survivors to Libya, where they endured detention in inhumane conditions, beatings, extortion, starvation, and rape. Two of the survivors were subsequently ‘sold’ and tortured with electrocution. The consequences of the agreement for migrants attempting to leave Libya have been catastrophic, according to the clinic. Deaths by drowning, as well as violence and ill-treatment on board the Libyan Coast Guard vessel, have been captured on camera by the crew of Sea-Watch 3.

The application was filed by the Global Legal Action Network (GLAN) and the Association for Juridical Studies on Immigration (ASGI), with support from the Italian non-profit ARCI and Yale Law School’s Lowenstein International Human Rights Clinic. Their submission made use of evidence compiled by Forensic Oceanography, part of the Forensic Architecture agency based at Goldsmiths, University of London, who have produced a detailed reconstruction of the incident and the policies that have contributed to it.

According to GLAN legal advisor Dr Violeta Moreno-Lax (of Queen Mary, University of London), “The Italian authorities are outsourcing to Libya what they are prohibited from doing themselves, flouting their human rights obligations. They are putting lives at risk and exposing migrants to extreme forms of ill-treatment by proxy, supporting and directing the action of the so-called Libyan Coast Guard.”

GLAN legal advisor Dr Itamar Mann (of the University of Haifa) added: “We hope this new case will serve to establish the key principle that so-called ‘pull-backs’ are contrary to basic human rights standards. The Libyan Coast Guard and Libyan militia forces cannot become Italy’s vehicle for migrant abuses in the Central Mediterranean.”

Charles Heller, co-founder of the Forensic Oceanography project, said: “We have analyzed 16 different episodes in which Italy, with the support of the EU, has coordinated and directed the Libyan Coast Guard to intercept and return migrants to Libya, despite the well-documented human rights violations they can expect to face there. The evidence we have gathered demonstrates the shocking extent to which Europe has been outsourcing its human rights violations.”

Lorenzo Pezzani, co-founder of the Forensic Oceanography project, added: “Audio-visual recordings by NGOs at sea have allowed us to reconstruct incidents such as that described in this application with unprecedented precision. What emerges is a harrowing story that brings the dramatic effects of Italy and the EU’s policy of ‘pull-back by proxy’ into sharp relief.”

Professor James Silk ’89, director of Yale Law School’s Lowenstein Clinic, said: “In the early 1990s, the Lowenstein Human Rights Clinic challenged the U.S. government’s interception and return of Haitian refugees on the high seas. We have continued to expose and oppose the gross injustices of stopping migrants at sea and returning them without due process to places where they will suffer violence and ill-treatment.”

Talya Lockman-Fine ’20, a student on the Clinic team, added: “International law must not be misinterpreted to permit countries to subcontract their human rights violations and avoid all accountability.”

Sara Prestianni, spokesperson for the Italian non-profit ACRI, said: “This application is essential for demonstrating the political and legal responsibility of the Italian Government for ongoing systematic violations of human rights law, both at sea and in the hellish conditions to which migrants are returned in Libya.”

In 2012, the Grand Chamber of the European Court of Human Rights found that Italy's ‘push back’ campaign—orchestrated through multiple accords, including the 2008 Berlusconi-Gaddafi Treaty of Friendship—breached international law, specifically the prohibition of torture and inhuman or degrading treatment and protections against collective expulsion. These accords have been reactivated through a 2017 agreement between Italy and Libya, which has led to Italy training, equipping, and financing the Libyan Coast Guard and providing technical, strategic and political support.

Illegal methods of border enforcement have proliferated along the borders between rich and poor countries, with well-established consequences for the rights of migrants, including their right to life and the prohibition of torture. ‘Pull-backs’ are one feature of a growing practice, including the widely criticized EU-Turkey deal, which impinges on migrant rights, while relying on techniques of avoidance of legal responsibility. The increasing number of deaths of migrants in the Mediterranean in recent years is a direct result of state practices that neglect international law.

GLAN (Global Legal Action Network) is a non-profit organization that identifies and pursues innovative legal actions in the Global North aimed at protecting human rights in the Global South. GLAN is a collaboration of legal practitioners, academics, and investigative journalists.

ASGI (Association for Juridical Studies on Immigration) is a membership-based association focusing on all legal aspects of immigration. As a pool of lawyers, academics, consultants and civil society representatives, ASGI’s expertise relates to various areas of immigration and migrants’ rights, including but not limited to antidiscrimination and xenophobia, children’s and unaccompanied minors’ rights, asylum seekers and refugees, statelessness and citizenship.

Forensic Oceanography is a project affiliated with the Forensic Architecture research agency at Goldsmiths, University of London. Since 2011, Forensic Oceanography has used forensic techniques and cartography to critically investigate the political, spatial and aesthetic conditions that have led to the death of large numbers of migrants across the Mediterranean over the last 30 years.