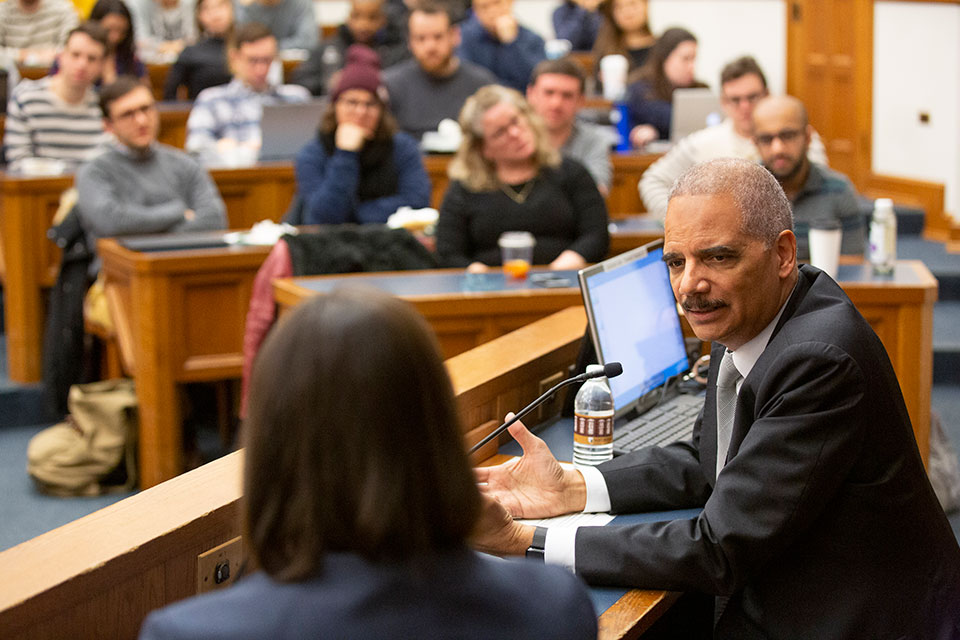 During the hour-long event, which included questions from Rodríguez and several students in the audience, Holder discussed a wide range of subjects, including the Obama administration’s attempts to close the detention center at Guantanamo Bay, the importance of an independent Justice Department, the role of the Attorney General in matters of national security, and the persistent threat of voter suppression.

Speaking to an audience of more than 125 students, Holder recounted many of the decisions he made as Attorney General, in particular his efforts to defend voting rights across the country. He predicted that Shelby County v. Holder, the Supreme Court’s 2013 opinion striking down a key provision of the Voting Rights Act of 1965, would be remembered as one of the worst decisions of the Roberts court. As the current chairman of the National Democratic Redistricting Committee, protecting voting rights remains central to Holder’s work.

“We are very grateful that Mr. Holder took time out of his busy schedule to visit Yale Law School,” Rubin ’20 said. “It was an honor not only to learn more about his experiences at the Department of Justice, but also to talk through some of the most urgent legal questions facing the country at this critical moment.”

Riffing on Dr. Martin Luther King, Jr.’s famous quote, Holder concluded by exhorting students to pull the arc of the moral universe toward justice by devoting at least part of their careers to public service.

“To have someone of Mr. Holder’s stature speak to us so candidly was a real privilege,” Lalwani ’20 said. “We were particularly inspired by his call to public service, and by the premium he placed on serving with integrity.”