Nixon Boumba and Ellie Happel on Building Solidarity in Haiti 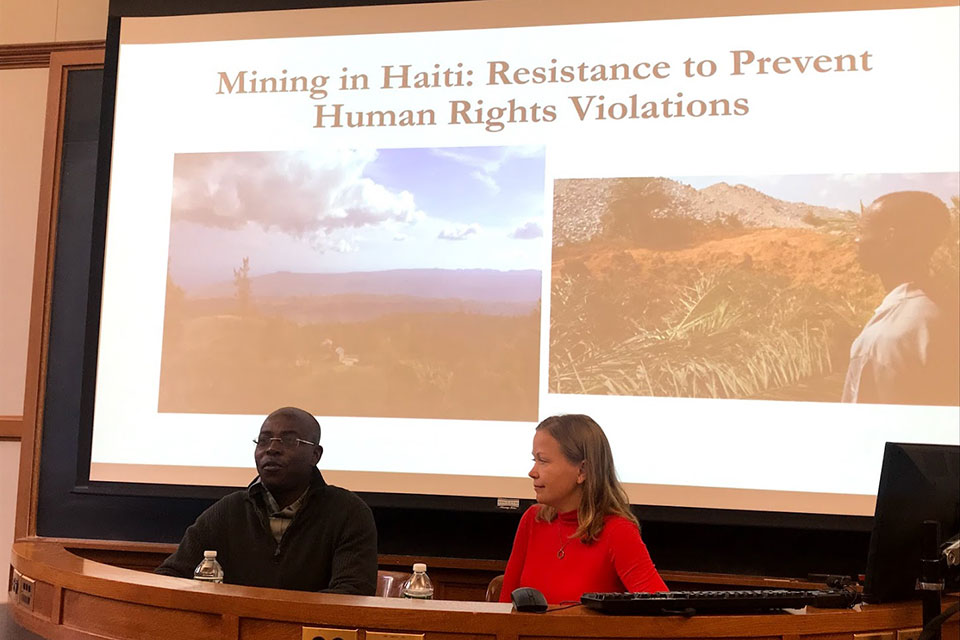 On February 22, 2019, Schell Center Visiting Human Rights Fellow Nixon Boumba and Ellie Happel, the Haiti Project Director at the Global Justice Clinic at NYU, discussed their six-year-long partnership to fight the development of mining projects and related human rights violations in Haiti, such as threats to clean water, food sovereignty, and health.

As Boumba explained, the Haitian government sold gold and silver mining contracts to companies, one of which was the U.S.-based Newmont Mining, after the devastating 2010 earthquake, when the government’s top priority was to “reopen the country for business.” These companies invested more than $30 million into exploration of large-scale mining and built open-pit mines, which are larger than the world’s biggest football stadiums.

Boumba joined several other human rights organizations to form Mining Justice Collective to protest these developments, educate the public about the consequences of mining, and build the capacity of Haitian human rights defenders.

Boumba stressed that the Collective’s partnership with the NYU Global Justice Clinic was crucial to trying to stop the development of mining projects in Haiti. Happel explained, “Most people don’t talk about mining in Haiti because it hasn’t yet happened on an industrial scale.” But, she added, “We [the Global Justice Clinic and the Mining Justice Collective] wanted to insert ourselves prevent the development of the mining sector overall to try and be proactive and block metal mining in the country.” Boumba and Happel stressed that mining projects are particularly risky in Haiti, because of environmental degradation in the country that began in the 19th century, when Haiti cut down its most valuable trees to help repay its debts to France, which it had negotiated after Haitians overthrew their French slaveowners.

Happel and Boumba both expressed their concern about corruption, lack of transparency, and conflicts of interest surrounding mining. Boumba criticized the Haitian Senate for failing to regulate the mining companies and the revolving door of government officials who go into the mining industry themselves. The remoteness of metal mining projects in Haiti, which take place in isolated areas in the north of the country, makes it harder to get accurate information on the mining projects. The information that is published on the projects mostly comes from the mining companies themselves and is only published in English. One job the Global Justice Clinic has taken on is translating the companies’ documents into French and Creole, so that they are more accessible to the Haitian public.

“We need to have a clear, sustainable process to keep track of what mining companies are doing,” emphasized Boumba. Happel added that the lack of access to information and the threats posed to environmental rights are human rights violations themselves. The Global Justice Clinic has also petitioned the Inter-American Court of Human Rights to call upon Haiti to pass a law guaranteeing their citizens more access to information in Creole.

To build the capacity of Haitian human rights activists working to block the development of mining, the Mining Justice Collective has brought Latin American and African activists to Haiti to share their experiences fighting mining projects with local activists. The Mining Justice Collective went on to show footage of the activists’ statements, dubbed into Creole, in movie theaters and in rural communities around the country, with the goal that hearing activists’ testimony will debunk the idea that mining will improve Haiti.

The Global Justice Clinic has also assisted the Mining Justice Collective with testing the water around mines to check for mercury, cyanide, and acid draining. There were no labs in Haiti that could do the necessary tests, so the Global Justice Clinic found two American hydrologists who worked with local community members to test more than 50 sites inside one mining permit. Said Happel, “We hope that with that data, we can hold mining companies accountable.” Boumba added that the project was very effective in educating locals about the effects of mining.

Boumba and Happel summarized the goals of their partnership as promoting justice and building the capacity of human rights activists and said that their partnership could serve as an example to others of “solidarity in action between the East and the West.”