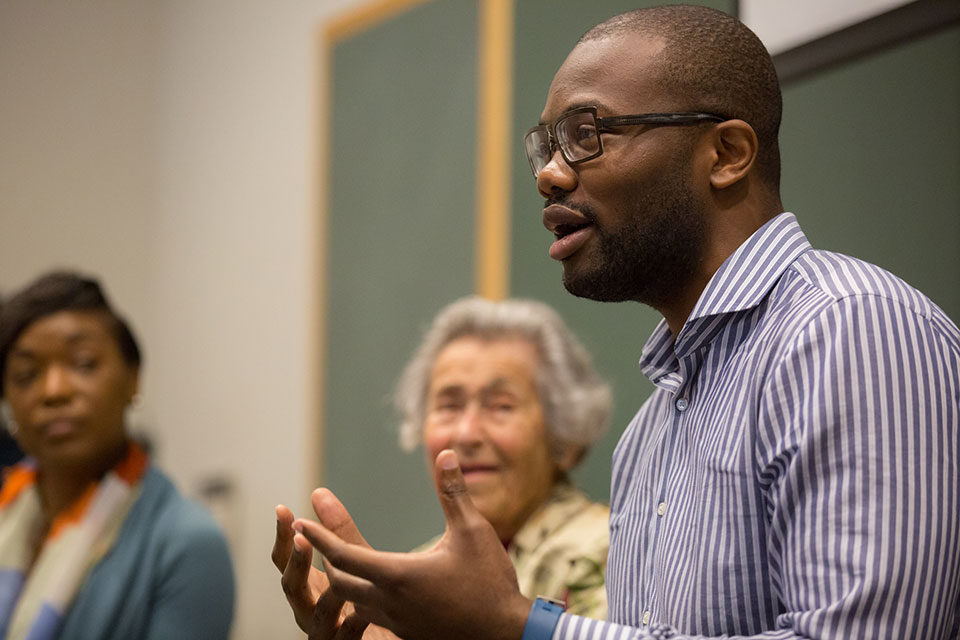 Chika Okafor ’15 just started a Ph.D. in Economics at Harvard University. Before he arrived in Cambridge, he spent a year as a Tom & Andi Bernstein Human Rights Fellow at the U.S. Holocaust Memorial Museum (USHMM) in Washington, D.C. During his time at USHMM’s Simon-Skjodt Center for the Prevention of Genocide, Okafor contributed to the museum’s efforts to prevent contemporary atrocities, such as the Early Warning Project, which recently announced that Sudan, Yemen, and Burma are the top countries at risk of new state-led mass killing. Okafor also supported Stephen Rapp, the former U.S. ambassador-at-large for global criminal justice, with his project on strengthening standards that guide how human rights investigations operate. Additionally, Okafor helped Stephen Pomper, former Special Assistant to President Obama and Senior Director for African Affairs, Multilateral Affairs, and Human Rights, to assess the Obama administration’s record on atrocity prevention and response.

Okafor spoke to the Schell Center about his work at USHMM and the lessons he learned during his fellowship.

The Early Warning Project has different components with different methods, to provide many ways to analyze the risk of new atrocities. The Project determines the top countries at risk by conducting an annual Statistical Risk Assessment (SRA), which uses publicly-available information and three models to rank the likelihood of state-led mass killing in countries with a population greater than 500,000. The SRA delineates many risk factors, including past episodes of mass killing, regime type, past coup attempts, past political instability, and civil conflict, among others.

A second component of the Project is identifying which countries have ongoing atrocities – for that, I looked at lots of human rights reports, datasets, and other documents on various countries to see if they had situations that satisfied our definitions for ongoing atrocities. My analyses helped determine some classifications. A third component is issuing surveys to human rights practitioners, other experts, and the general public to determine the likelihood of atrocities across various countries. I helped revise the language for these surveys and helped publicize them.

What were the goals of your work with Ambassador Stephen Rapp?
Right now, the processes of conducting human rights investigations and prosecuting potential human rights violators are very separate. When a particular country is suspected of violating human rights, the UN or another country will launch a human rights investigation to find out if violations actually did occur. That process is concerned with upholding respect for legal norms by state and non-state actors. And then there’s another side—criminal investigations against leaders or groups that have transgressed, which is much more concerned with individual responsibility. Ambassador Rapp’s goal was to bridge the gap between those two processes, so he organized a convening of expert practitioners in human rights fact-finding, international law, and criminal prosecution. The conference was in Bellagio, Italy, and the goal was to develop better standards for human rights investigations. I was invited to attend as a rapporteur and took notes on the proceedings and takeaways.

And from your work with Stephen Pomper, President Obama’s former advisor, what did you conclude about the U.S.’s atrocity prevention efforts?
I researched U.S. and international actions taken between January 2009 and 2017 to respond to atrocities ensuing in ten nations. One of the things that came out of the Obama administration was an increased focus on atrocity prevention: they published a directive saying that it was in our best national security interests and a moral imperative to prevent mass atrocities and genocide. Also, the Administration created the Atrocity Prevention Board, and through that, atrocity prevention had a higher profile in foreign policy work. This was definitely a move in the right direction, and through my work I learned the extent to which atrocity prevention measures are effective often depends on an accurate assessment of the leverage the U.S. government and other international actors have over a particular leader, group, or state.

What challenges did you face in your work and how did you overcome them?
In my research, one of the biggest challenges I faced was getting close enough to the particular facts and details surrounding a particular country to be able to say something meaningful about it, and also be able to step back and glean lessons that are applicable across countries. Sometimes those goals conflict with each other—to really understand what’s happening, you have to go really deep, but that makes it harder to come up with global findings. For me, overcoming that challenge was a process: as you learn more about different countries, you do start to see more commonalities across countries, but it’s also important to recognize that what might be applicable to one country might not be in another. You have to relax the presumption that there must be patterns across multiple cases.

How did you maintain optimism and momentum in your work?
This is the second experience professionally where I’ve confronted really tough subject matter. After working as a consultant with McKinsey & Company, I worked as a Project Manager with the Chicago Public Schools on a violence prevention initiative. This role involved my working with a couple of the most troubled schools in Chicago and seeing the distressing circumstances that many students faced every day. From that experience, I learned the importance of exposing myself to positivity and of doing things outside of work that bring me joy. I did that in Washington D.C., too—there were many opportunities around the city that would allow you to take a reprieve from the heavy content matter of the day-to-day. Also, even despite some of the negativity inescapably linked with working on atrocity prevention, at USHMM I was surrounded by such a strong team, who made it much easier to deal with any negative circumstances. There’s so much great work coming out of the museum, and it’s inspiring to see what a competent, caring, coordinated group of people can do when they’re moving in the same direction.

Also at USHMM, you, along with Holocaust survivor Margit Meissner and a museum staff member, spoke on a panel on immigrant and refugee experiences. Tell us more about that.
It was a program where kids come to USHMM to learn about the museum and how elements of the museum and its lessons are relevant today. We discussed the refugee and immigrant experience and how that might influence the work that we perform at the museum and our identity. Both of my parents came to the U.S. from Nigeria, where both had suffered during outbreaks of violence. On the panel, I used my family history as a bridge to the history of the U.S. I talked about how many settlers came to the U.S. to seek economic empowerment and freedom from religious persecution, and that those are similar reasons to why my parents came. I was born and raised in the U.S. and, as the son of immigrants, I realize that my parents chose to be American and understood what that stood for—it is much harder for them to take the freedoms of this nation for granted.

In the Q&A session we had after the conversation, it was clear that the kids were already seeing the relevancy of Margit’s refugee story and the other points we made. Given the rise of white nationalism and other recent stories, it’s especially important to remember lessons from the past and work toward better preserving human dignity.

What experiences at Yale Law School were formative for you?
I came into law school with an interest in human rights, and that motivated me to apply for the Kirby Simon Human Rights fellowship after my first year. With that, I was able to do an internship with the European Court of Human Rights in Strasbourg, France, which was a really amazing experience. I helped one of the judges draft an opinion, performed comparative law research on human rights matters, and was surrounded by interns from all around Europe who were similarly interested in human rights. Much fulfillment comes from the work itself—it’s deeply rewarding to know that you’re pushing to champion and preserve human dignity. But it’s also great being part of the strong community of people who are attracted to human rights work.

Later, as a member of the Lowenstein International Human Rights Clinic at Yale Law School, I worked on a brief to the Inter-American Commission on Human Rights on behalf of victims of political violence. And I loved the chance to work with peers on something that let us directly apply what we were learning in the law school, and it’s been great to hear how that project has evolved over the years. Law school helped me realize that this work is very personally fulfilling.

What are your biggest takeaways from your time at USHMM?
My time at the museum gave me a research idea that I hope to explore through my Ph.D. in Economics. At USHMM, we discussed an opportunity to strengthen the justification for atrocity prevention measures. Most of the time, atrocity prevention arguments rely on morality, which makes sense—atrocities committed against civilians are, morally speaking, very clearly wrong. But I want to figure out whether there is a way to leverage the methodology of economics—perhaps with a cost-benefit or effectiveness analysis—to make a broader justification for atrocity prevention.

I also came to realize just how much the voice of USHMM is needed and respected. It has an unparalleled capacity to convene people and push particular conversations. The resources that it devotes to contemporary atrocity prevention are unique; it can do so many things as an institution that lots of government agencies and other organizations cannot. I vividly recall two messages from the Museum I came across frequently during my fellowship: “genocide is preventable” and “never again.” These messages challenge me and all others, from the general public to government leaders, to remain vigilant and proactively work toward stopping such violence from happening again.