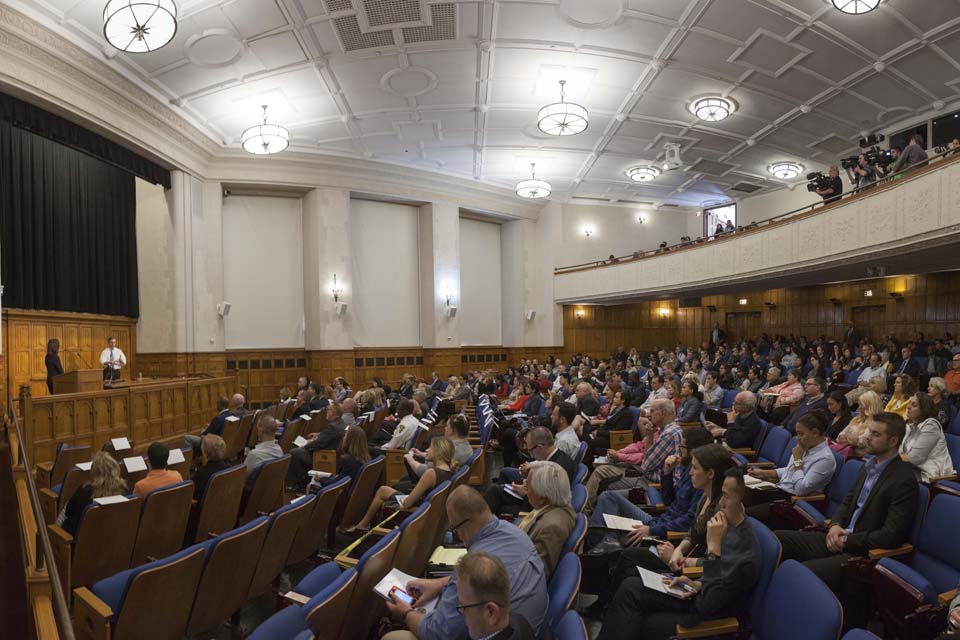 More than 400 people attended a conference on September 29, 2017 on “The Opioid Crisis in Connecticut,” jointly sponsored by Yale Law School and the United States Attorney for the District of Connecticut. Panels of law enforcement leaders, medical professionals, and parents who have lost children to overdoses discussed the significant steps needed to combat this deadly and tragic epidemic.

Connecticut Governor Dannel P. Malloy thanked U.S. Attorney Deirdre M. Daly and Yale Law School Professor Kate Stith for securing speakers who are crafting innovative approaches to the crisis. He also impressed upon the community how much more is still needed to wipe out the “scourge” that is fentanyl—an immensely potent drug that is often mixed in unknowable amounts with heroin.

Education and prevention were the recurring themes of the event. In his last official act as Acting Administrator of the Drug Enforcement Administration, keynote speaker Chuck Rosenberg made it clear that we “won’t enforce or incarcerate our way out of this mess. Not a chance.” At the same time, he said, it is appropriate for law enforcement to target the high-level cartels and supply networks profiting off the misery inflicted. But at its core, Rosenberg maintained that the opioid epidemic is a public health crisis. “I’m out of horrific analogies,” Rosenberg said, unable to find an apt comparison to the 64,000 annual overdose deaths in the last year. “How do you change a culture? We need to talk about this everywhere, all the time.” The United States has by far the highest rate of opioid use in the world.

FBI Community Outreach Specialist Charles Grady had a similar plea to the assembled audience — tell the stories of how people become dependent on opioids, and eliminate the stigma of substance use disorder.

The most important strategy, a variety of speakers emphasized, is prevention through education.

75% of heroin users start with prescription pills, often obtained from friends or from their parents’ medicine cabinet.

One target audience is high school and middle school students, Grady said. He cited operationprevention.com, whereby a school can invite the U.S. Attorney’s Heroin Education Action Team (HEAT) to screen and discuss the film “Chasing the Dragon: The Life of an Opiate Addict.” The film was produced last year under the leadership of Rosenberg and former FBI Director James Comey.

Physicians, especially primary care physicians, must also be educated in “rational prescribing,” said Yale School of Medicine’s Dr. Daniel Tobin. While it “seems easier to write [prescribe] than to fight, all you are then doing [as a doctor] is furthering the problem,” Tobin said. Doctors must realize—and students must know—that 75% of heroin users start with prescription pills, often obtained from friends or from their parents’ medicine cabinet.

Today’s opioid users are at exceedingly high risk of fatal overdoses given the rise of illicit fentanyl, an opioid that in pure form is 100 times more potent than heroin, organizers warned. The drug is primarily manufactured in China and is often sold in the form of counterfeit Oxycontin or Xanax pills.

In many cases, users do not know what substances they have actually received. And they do not know the lethal potency of the fentanyl-laced powder available for purchase on the street, or the counterfeit pills available for purchase on the “dark web.” Governor Malloy summarized: “The opioid issue [today] is this fentanyl, and fentanyl in a strength that is killing people,” he said. In Connecticut, 644 people are projected to overdose this year with fentanyl in their bloodstream, up from 14 in 2012.Jon Rubinstein, DEA Supervisor for the statewide Tactical Diversion Squad, is now “the busiest I’ve ever been” in 28 years as a DEA agent, including several years in New York City during the “crack epidemic” of the late ‘80s and early ‘90s. The quantities of heroin—or, more accurately, “fentanyl laced with heroin”—in the street are enormous.

John Campbell, the Chief of Police in New Haven, told of an especially tragic and harrowing episode last summer in the City. Individual users thought the white powder they had purchased was cocaine. But it turned out to be heavily laced with fentanyl, another white powder, he explained. The Police Department responded to 20 overdoses in one day, a figure unheard of in Police Chief Campbell’s tenure on the force.

Fentanyl is so strong that touching it or breathing in a minute amount of vaporized powder can cause severe illness. Chief Campbell said that both first responders to an overdose and even nurses treating the first responders at the hospital have become sick through such exposure. The New Haven Police has had to retrain its officers in use of personal protective equipment, from gloves to breathing equipment. The DEA has sent out a nationwide alert that there would no longer be field tests on drugs as they are too dangerous to agents.

To help those affected by opioid use disorder—and stem the rapidly increasing death toll—we must “think, talk, and treat this addiction in a particular way,” said Yale School of Medicine’s Dr. David Fiellin. He encouraged medically-assisted treatment (MAT) through the use of buprenorphine or methadone, the first strategy endorsed by the Connecticut Opioid Response (CORE) Team. The NIH deems MAT the “current standard of care” for treating opioid use.

Those incarcerated should not be deprived of MAT, said Colleen Gallagher, of the Connecticut Department of Corrections’ Health and Addiction Services. She emphasized the high percentage of people entering prison with substance abuse disorder (75-85%) and in need of treatment, and said that availability of MAT to those in jails and prisons would ultimately reduce recidivism and health care costs.

Such substance abuse treatment is available in 1% of correctional institutions nationwide, Gallagher said. Connecticut has been on the frontlines since 2013, when interagency collaboration made possible legislative changes to public health rules and paved the way for a methadone clinic to open inside the New Haven jail. This Pilot Methadone Maintenance Program means that the jail is a place not just to detox, but to treat opioid use disorder. “These are patients, not inmates,” Gallagher said. “It’s not often that DOC gets a thank you note [from those it incarcerates], but now we do.”

At the end of the day, the panelists agreed on the need for a paradigm shift centered around education, treatment, and understanding opioid use as something that Yale School of Medicine’s Dr. Julia Perry said should be seen as “a disease we need to treat and not condemn.”

Rosenberg, speaking as a parent as well as life-long public servant, said the only way to combat this critical epidemic is to face it head on through difficult discussions with friends and family.

“We have to have the hard conversations,” said Rosenberg. “It’s incumbent to educate ourselves and then educate someone you love.”

The Opioid Forum was funded by the Oscar M. Ruebhausen Fund.