The Origins of the MFIA Clinic 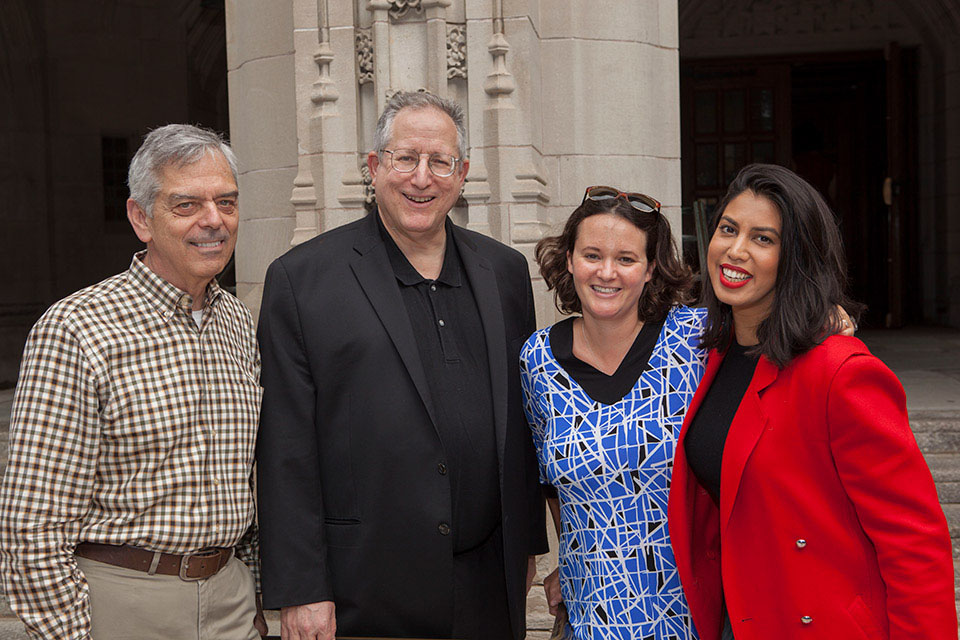 When a group of Yale Law School students reached out to First Amendment scholar and Knight Professor of Constitutional Law and the First Amendment Jack Balkin a decade ago, the idea was simple — to create a practical media law experience for students. The cohort — Nabiha Syed ’10, Patrick Kabat ’10, Adrienna Wong ’10, and Margot Kaminski ’10 — saw a void in the fight for “the public’s right to know”: the kind of public interest litigation that, in the past, had been fought near-exclusively by mainstream news organizations but was waning as the Internet drove down newspaper profits.

“Someone needed to pick up the slack,” says Balkin.

To fill that void, what would soon become the Media Freedom and Information Access (MFIA) Clinic at YLS was born. And the perfect home for it was the Information Society Project (ISP), the Law School intellectual center for research at the intersection of speech, law and technology that Balkin founded and directs.

Over the last century, news organizations didn’t just defend their own interests, Balkin explains. They also defended the interests of the public sphere more broadly because doing so served their long-term goals. These journalism entities often used the profits from their geographic monopolies to do public interest work that promoted government accountability and defended the rights of the press generally. Yet as the Internet undermined ad-driven business models, cutbacks soon came in the form of slashing legal expenses that weren’t deemed immediately necessary.

“We were aware of this media shift and knew we wanted to do public interest litigation that focused on freedom of the press and access to information,” says Wong, now a staff attorney at the ACLU of Southern California. “We just weren’t sure how the pieces would quite fit together yet.”

But the founders of the Clinic understood this was a chance to see the legal theory they learned in courses operating right before their eyes on a national stage.

The idea began taking shape as a regular student-led practicum on access to information law, with an emphasis on the Freedom of Information Act (FOIA) and privacy law. Starting in Spring 2010, students also signed up to work with media lawyers on cases. Balkin and the founders asked First Amendment attorney and Floyd Abrams Clinical Lecturer in Law David Schulz ’78 to step in and supervise these efforts, and he traveled to New Haven from Manhattan once a week through the Clinic’s early years.

“The opportunity to work with Yale law students on interesting cases to advance government accountability was an opportunity I could not pass up,” says Schulz.

Today, Schulz is the Clinic’s full-time codirector with Balkin, and supervises three full-time fellows and about two dozen students each term to maintain a docket of about 30 active cases in state and federal courts across the country.

Grants from the Knight Foundation (to educate media lawyers) and famed First Amendment attorney Floyd Abrams ’60 to found the Abrams Institute for Freedom of Expression, under which the MFIA Clinic now operates, helped cement the Clinic’s work.

“We realized that the law could help guarantee access to information,” says Syed, former newsroom lawyer at Buzzfeed News and current President of The Mark Up, a new investigative journalism venture. “But there wasn’t a unified institution at the time that could enforce that right like the various staff attorneys at major newspapers had done in years prior. The law doesn’t stand alone — it needs systems around it that allow it to flourish.”

So, they created one.

“We saw a pathway for law schools to begin standing in for a resource that the public had previously received for free from big papers,” says Kabat, who, like Syed, started a career in media law and worked to set up clinics on the MFIA model at Case Western Reserve University and Cleveland State University. “We wanted to take the mantle to protect the public’s right to know and preserve the contour of those First Amendment-protected rights.”

Wong recalls a similar sentiment. “With MFIA, YLS was an early adopter and rather precedent-setting on this front,” says Wong. “This work is important in maintaining democracy and bolstering the strength of democratic institutions.”

Balkin, whom students jokingly refer to as “The Godfather of MFIA,” is thrilled to have been a part of forming the Clinic. “If MFIA weren’t here, access to information would be poorer.”

Wong agrees. “MFIA was among the first of its kind — we proved it could be done at law schools. I’m thrilled to now see more clinics like this popping up all around the country.”

MFIA has also helped shape the trajectory of students’ future careers, including those of its founders.

“The work I did with MFIA gave me a sense of purpose and helped me find my calling,” says Kabat. “I got to interact with big players in the media law community while I was still a student. By doing this work, an entire career path was illuminated to me.”

Kabat recalls his time in MFIA fondly, which he says also helped him develop a sense of the legal issues that he finds the most compelling by allowing students to choose which cases they feel best serve the public’s interests.

Syed reminisces about how her years with the Clinic have helped shaped her outlook, too.

“Every case we’ve had pulled back the curtain on newsworthy and timely issues facing society,” Syed says. “Every case is rooted in the mission of better understanding what the journalistic project truly means. The oversight function a free press provides makes it a core institution to our democracy. To be able to play a role in that is my joy. I feel lucky that this is an area that I still get to spend my time thinking about. And it all started with MFIA.”