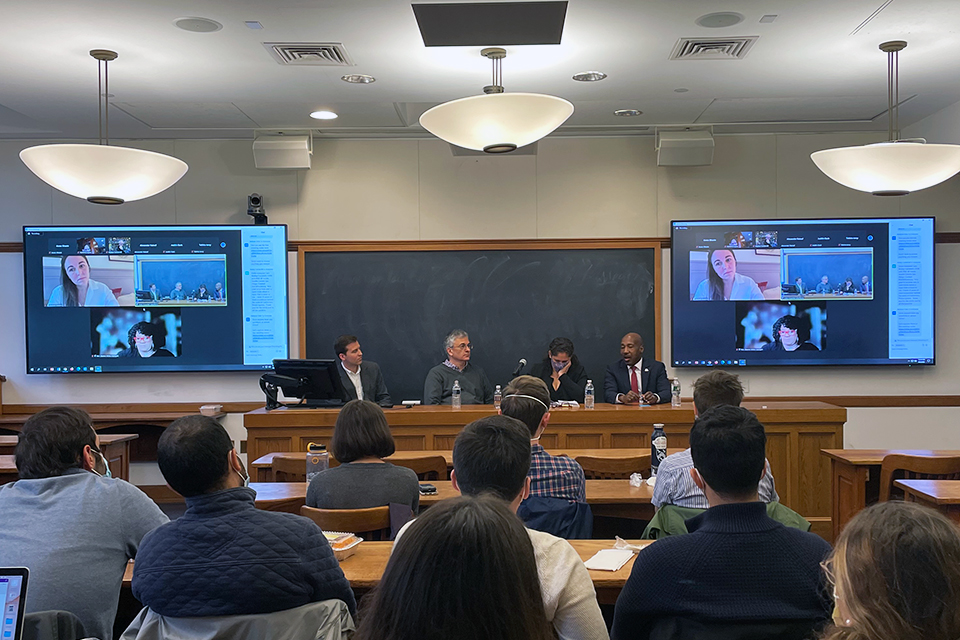 A panel examined the humanitarian crisis at the Rikers Island jail complex in New York City.

On April 6, the Solomon Center for Health Law and Policy hosted a panel discussion on the humanitarian crisis at the Rikers Island jail complex in New York City and the lessons that it holds for incarceration in America. The panel was the second event of the Spring Spotlight Series on Prison Health co-sponsored by the SEICHE Center for Health and Justice and the Arthur Liman Center for Public Interest Law.

The panel included Vincent Schiraldi, Senior Fellow at the Columbia Justice Lab and former Commissioner of the NYC Department of Probation and Correction; Rev. Sharon White-Harrigan, Executive Director of the Women’s Community Justice Association; Dr. Rachael Bedard, Research Fellow at the Institute to End Mass Incarceration at Harvard Law School and former Director of the Geriatrics and Complex Care Service on Rikers Island; Andre Ward, Associate Vice President of the David Rothenberg Center for Public Policy at The Fortune Society; and Veronica Vela, supervising attorney at the Prisoners’ Rights Project at The Legal Aid Society. The event was moderated by Law School student Connor Bell ’24, who previously worked on Rikers Island in the Mental Health Service.

Bell began the event with historical context about Rikers Island. Health and safety issues have always plagued Rikers Island, he said, even as the resident population declined from over 20,000 in the 1990s to 5,500 today.

Since the beginning of the COVID-19 pandemic, 26 residents have died in custody and there have been thousands of slashings and stabbings, Bell noted. New York City Mayor Eric Adams has said he will follow through on the city’s goal of closing Rikers Island and moving pretrial defendants to borough-based jails by 2027.

Schiraldi described the acute staffing crisis on Rikers that contributes to the lack of safety. Despite having 7,700 uniformed staff to supervise 5,500 residents, he said that abuse of the Department’s unlimited sick leave policy leaves many housing areas unattended or staffed by officers working double or triple shifts. This means that there are not officers available to escort residents to medical appointments, recreation, and showers and little to no intervention in fights, suicide attempts, and fatal accidents. Disciplinary measures to bring officers back to work have been mostly unsuccessful, he said.

White-Harrigan discussed the inherent “toxicity” of Rikers Island. Rikers is built on garbage landfill that emits toxic gases, the water residents drink is discolored, and the dilapidated buildings contain mold, insects, and rodents. Moreover, she said, the culture of brutality and neglect on Rikers is toxic. In particular, the needs of women — the majority of whom are domestic violence survivors and have mental health concerns — are not met, despite the city spending some $500,000 per resident per year on incarceration. White-Harrigan stated that decarceration is urgent, and the women should be first to come off Rikers.

Bedard described how COVID-19 brought the health risks of incarceration into stark relief. Jails and prisons bring medically vulnerable and highly traumatized people together in close quarters, creating high risks for infectious disease transmission and violence. She described clinical work on Rikers as “harm reduction” and urged decarceration. She lauded the success early in the pandemic to release 1,500 people in six weeks, but the jail census has since surpassed its pre-pandemic level.

Ward likened Rikers to a “tumor” growing from a racially unjust city. He said that society must understand the root causes of how a city of 50% Black residents can create a jail that is 90% Black. Ward identified the root causes as social determinants of health like unemployment, poor schools, and poor healthcare. He urged redirecting funds spent on incarceration into new infrastructure to address these social determinants. He also advocated for using restorative justice approaches to create accountability in response to interpersonal harms rather than relying on incarceration.

Vela discussed the powers and limitations of litigation to protect people’s health and safety in jails and prisons. She described how news coverage of information unearthed in prison litigation can change narratives about the reality of incarceration. She also encouraged law students at institutions like Yale to look beyond federal courts, as state courts are more relevant to the operation of most jails and prisons. She then described her recent mandamus action to direct the Department of Correction to provide escorts to medical appointments and the Department’s legal defense. She said it was simply impossible to meet their duty due to staffing problems.

The panelists responded to each other’s comments and to audience questions, and brainstormed solutions to the public health crisis facing jails and prisons.

White-Harrigan and Ward discussed the importance of including formerly incarcerated people when developing solutions and overseeing their implementation. Schiraldi and Vela discussed the possibilities of a federal receivership, wherein court officers would take over administration of the jails, and writs of habeas corpus. Bedard stressed the importance of decarceration by categories of charges and medical vulnerabilities, rather than a person-by-person review. She added that, ultimately, Rikers must be closed because it is not salvageable. The panel concluded by considering what it takes to build the necessary coalitions to decarcerate communities and build public health infrastructure in its stead.