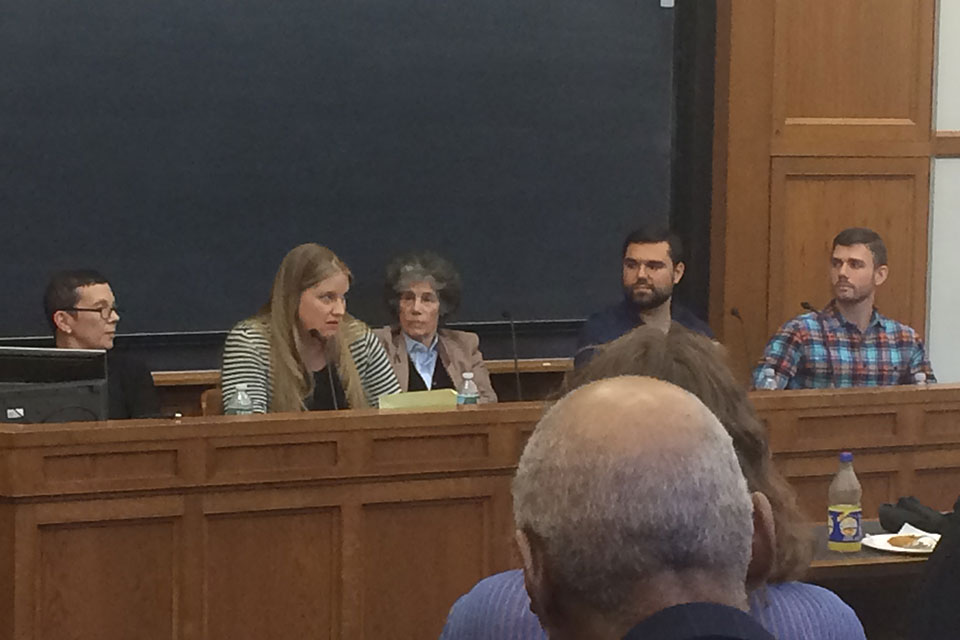 On February 22, 2018, the Solomon Center for Health Law and Policy, the Yale Health Law and Policy Society, and the Yale Native American Law Student Association hosted a panel entitled “Litigating the Opioid Crisis: Tribal Sovereignty and American Pharmaceuticals.” The discussion featured Chrissi Ross Nimmo, the Deputy Attorney General for the Cherokee Nation; Jan Hoffman, a health and behavior reporter for The New York Times; and Professor Judith Resnik, the Arthur Liman Professor of Law at Yale Law School. Abbe Gluck, Professor of Law and Faculty Director of the Solomon Center for Health Law and Policy at Yale Law School moderated the panel.

Jan Hoffman, whose feature on the opioid crisis in the Cherokee Nation ran as a lead story in the December 17 issue of The New York Times, kicked off the discussion by detailing her experiences in the Nation’s capital, Tahlequah, Oklahoma. At the tribal-operated W.W. Hastings Hospital and in the Tahlequah community, she witnessed first-hand the devastating impact opioids have had on the Cherokee Nation. In particular, Hoffman discussed scenes at the hospital’s maternity wards, where babies born to mothers testing positive for opioids are taken into protective custody. In light of the opioid crisis, 70 percent of Cherokee foster children are placed in non-Native households due to the lack of available Cherokee homes.

Following Ms. Hoffman’s overview of the public health crisis, Deputy Attorney General Nimmo detailed the current status of the Cherokee Nation’s litigation against opioid distributors and retail pharmacies. Initially, the Nation filed the suit in the Cherokee Nation District Court. In response, defendants, including McKesson, Cardinal Health, Amerisource Bergen, Walmart, Walgreens, and CVS Health, sought a preliminary injunction in federal court. The U.S. Court for the Northern District of Oklahoma ruled the case did not meet the exceptions outlined in Montana v. United States that allow tribes to exercise jurisdiction over nontribal members. Cherokee Nation then refiled the case in Oklahoma state court.

Professor Resnik concluded the opening statements by describing the unique jurisdictional position of tribal courts, which serve as a “third sovereign” next to state and federal systems. In addition to outlining the basic requirements tribes must satisfy to gain jurisdiction over nonmembers in tribal court, Professor Resnik also spoke to the prospects of a federal appeal given the current judicial environment, weighing the practical and theoretical considerations of such an action.

During the question and answer session with audience members, Nimmo discussed the Nation’s decision to re-file the case in state court rather than appeal the federal decision. The federal appeals process would take a great amount of time and resources. On the other hand, filing the case in Oklahoma state court provides citizens of the Cherokee Nation with an avenue for more immediate relief from the damage opioids have caused and allows the Nation to present its case to a jury composed of individuals who have witnessed the crippling impact of opioids in their community. Nimmo and Hoffman also described the realities of the Indian Health Service and potential reasons for the uneven geographic distribution of the opioid epidemic in Indian Country. Additionally, both panelists highlighted the steps Cherokee Nation has taken to treat patients since Hastings Hospital became a tribe-operated facility, including establishing a state-of-the-art Suboxone treatment center.