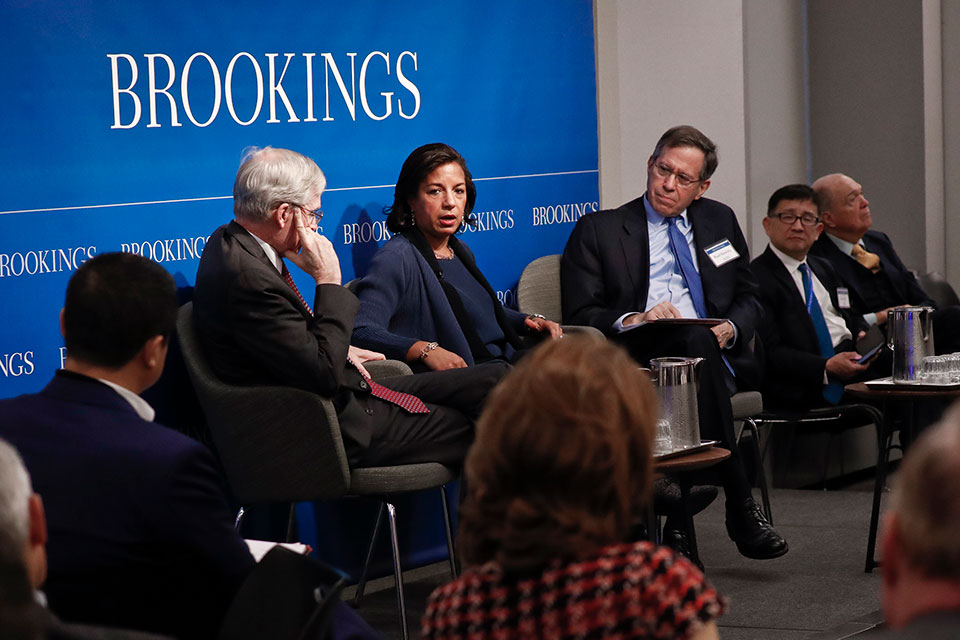 On October 30, 2018, former national security advisors Stephen Hadley and Susan Rice participated in a “fireside conversation” at the Brookings Institution to discuss U.S.-China relations. The event, part of the first major collaboration between the Paul Tsai China Center at Yale Law School and the John L. Thornton Center at Brookings, and moderated by the Tsai Center’s Director, Professor Paul Gewirtz, showcased the current views about the U.S.-China relationship from two of the leading foreign policy figures in the Democratic and Republican parties. Their service in the most senior foreign policy positions in our government spanned the sixteen years between 2001 and 2017, during the administrations of President George W. Bush and President Barack Obama.

They found common ground on current challenges and priorities. Both believe that the relationship with China has entered a new stage of significantly more competition and that the central challenge is to find effective ways to manage this more intense competition while also developing areas of cooperation. And they each enumerated a range of concrete steps to advance those goals in the time ahead.

Hadley said, “China is different today, the United States is different today. … The trick will be to recognize that a more competitive relationship need not result in confrontation or conflict. But it does need to be embedded in a set of principles and understandings that put some bounds on competition while at the same time allowing us to continue to cooperate with China on a whole host of issues … where it is in our interest to cooperate. I still believe that neither China nor the United States can achieve their vision for themselves and their own country if they don’t cooperate.”

Rice commented, “We are going to be in a greater degree of competition with China than we have been in the past. But I think that conflict is neither inevitable nor desirable. The risk I see is that we somehow decide that conflict is necessary and we get ourselves on a path that is dangerous and reckless … We are going to need to compete, and we are going to need to manage that competition so that it doesn’t spiral out of control. We also will need to find areas for cooperation, and to maximize those areas that are in our mutual interests.”