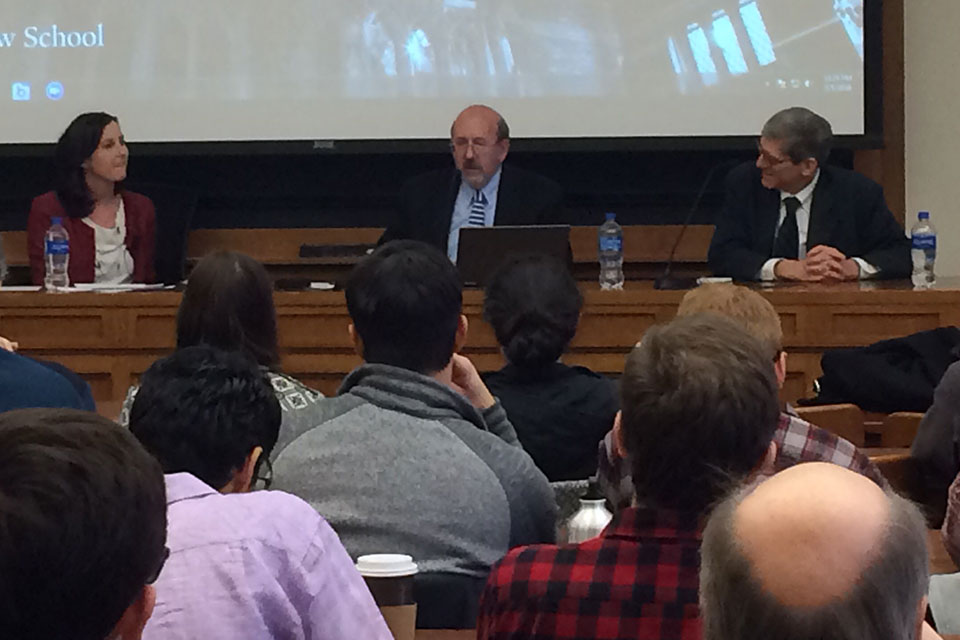 On March 5, the Solomon Center for Health Law and Policy, Poynter Fellowship in Journalism, and Yale Health Law Policy Society (YHeLPS) hosted a discussion on the role of media within the evolving political landscape. The discussion, titled “Four Decades Reporting on Health Care for the NY Times,” featured Robert Pear, Domestic Correspondent, Washington Bureau, at The New York Times, and Ed Grossman ’75, former Deputy and Senior Legislative Counsel for the United States House of Representatives. The panel was moderated by Professor Abbe Gluck ’00, Professor of Law and the Faculty Director of the Solomon Center for Health Law and Policy. The event was supported by the Poynter Fellowship in Journalism.

Robert Pear joined The New York Times in 1979. He has covered a wide range of health care topics throughout his career, including drug development, health insurance reform, and more recently, the Republican Affordable Care Act “repeal and replace” efforts.

Ed Grossman served as legal counsel in the U.S. House of Representatives from 1975 to 2017. He was the principle drafter of major health care laws such as Medicare, Medicaid, Children’s Health Insurance Program, and the Consolidated Omnibus Budget Reconciliation Act of 1985.

Pear began the conversation by discussing how news media has evolved over the years, specifically in regards to covering health care topics. “Media has become much more specialized in health care,” Pear stated, as health care has emerged to the forefront of national conversation. Pear noted that current news media must “bring attention to key issues” and “publicize the real-world implications of policy and court decisions.” Grossman employed a different view, stating that the “media has oversimplified these issues.” Healthcare issues are increasingly complex and nuanced, compared to the black and white portrayal seen in mass media. He noted that the media must delve into the tradeoffs considered when health care law and policy is being formed. Additionally, Grossman stressed the need for news media to reinforce a macro-level, community-driven social contract, instead of individualized narratives used in politics today.

Both panelists reflected upon the political longevity of the Affordable Care Act and future health reforms. When asked about the effect of not having a Republican vote for the ACA, Pear asserted that “as a legal matter it did not make a difference, but as a political matter it made all the difference. One could argue that this is what is driving the efforts to repeal it.” Given that the current administration lacks a clear strategy on how to address the ACA and Democrats are struggling to obtain bi-partisan support, Pear concluded that neither party knows how to approach this issue. Grossman agreed, observing that “Republicans are trying to cut the legs off of the ACA but not impact the people who are benefitting”—in essence, have their cake and their healthcare, too.

The Poynter Fellowship, established by Nelson Poynter (Yale, M.A. 1927), enables Yale to bring to its campus distinguished reporters, editors, and others who have made important contributions to the media.