Fabius is currently the Président of the Constitutional Council in France and was instrumental in facilitating the Paris Agreement on climate change. 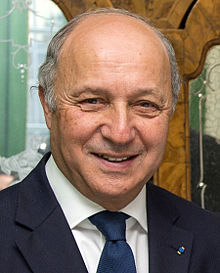 The lecture will be titled, “Environment and the Law: New Challenges for our Century.”

Discussing the lecture, Président Fabius writes: "Our world is facing an unprecedented ecological crisis that threatens both international security and the survival of humanity. Saving the planet remains possible, thanks to an alliance of forces of all kinds and, in particular, the force of law. Thus, building a legal system that reconciles environmental protection and economic growth is an ambitious, but nonetheless feasible program. Achieving these goals requires the creation of several legal innovations. One of them consists in the adoption of a Global Pact for the Environment. Such a tool would create a space in which the environmental norms would be applied to all, thus providing greater environmental security."

Président Fabius was chosen by President François Hollande to succeed to Jean-Louis Debré as President of the Constitutional Council in 2016. He is a French Socialist politician who was appointed by President Mitterrand to be Prime Minister of France at the age of 37. He served from July 1984 to March 1986. Later, Fabius was President of the French National Assembly from 1988 to 1992, and from 1997 to 2000. He then served in the government as Minister of Finance from 2000 to 2002, and Minister of Foreign Affairs from 2012 to 2016. In this latest capacity, he chaired the 2015 United Nations Climate Change Conference which took place in Paris and ended with the Paris Agreement on climate change. His way of mobilizing the whole French diplomacy in the two years preceding the conference and of engaging with all delegates to achieve a successful agreement during it, has been praised around the world.

The Robert P. Anderson Memorial Fellowship was established by former law clerks and friends in memory of Robert P. Anderson, B.A. 1927, LL.B. 1929, Senior Judge of the U.S. Court of Appeals for the Second Circuit.  The Fellowship has been in existence for many years, but has been redefined with a new objective: "to bring distinguished appellate judges to the Yale Law School to speak on matters of general importance to law and society.”