In the midst of a heated presidential election and during one of the few times in modern history in which all four major federal institutions of power are in play electorally, Sterling Professor of Law and Political Science Akhil Reed Amar ’84 has a new book examining how the Constitution is an essential tool to confronting the pressing issues of this moment.

In The Constitution Today: Timeless Lessons for the Issues of Our Era (Basic Books), preeminent constitutional scholar Akhil Amar uses a series of essays to probe the biggest and most bitterly contested debates of the two decades—from gun control to gay marriage, affirmative action to criminal procedure, Bill Clinton’s impeachment to Obamacare. With wit and wisdom, Amar sheds light on these issues while offering a more enduring set of ideas—a road map for where constitutional law must go in the long run. 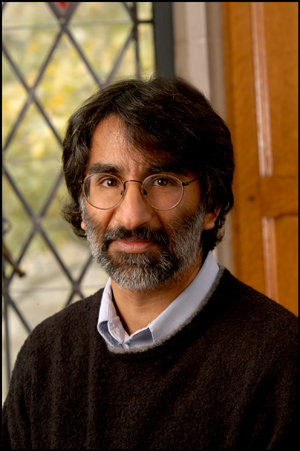 “America’s most brilliant originalist constitutionalist is also perhaps her best constitutional journalist: In this beautifully written collection, Akhil Reed Amar brings the words of our framers forward, and with wit and care, makes it easy for anyone to understand their wisdom and flaws, as he maps our Constitution onto the culture of modern American politics,” said Lawrence Lessig, Professor at Harvard Law School.

Looking to the Constitution’s text, history, and structure for the specific rules and grand themes relevant to every vital organ of the American body politic, Amar explores the basic structure of the modern federal government, examining in turn the key institutions and offices of national power set forth in the Constitution. He warns of the problems of presidential dynasties and the dangers of our current system of presidential succession; argues for a “nuclear option” to tame the filibuster and restore the principle of majority rule in the US Senate; and advocates for greater transparency in the federal judiciary. Amar then turns to the heated and persistent controversies over the scope of our constitutional rights, from matters of criminal procedure to modern America’s culture wars. Prioritizing sound constitutional reasoning over partisan preferences, Amar argues for diversity-based affirmative action, in support of the right to keep a gun in one’s home for self-protection, against spending caps on independent political advertising, and in favor of the right of same-sex couples to marry.

Composed of columns and commentaries crafted over the last two decades for periodicals such as the New York Times, Wall Street Journal, Washington Post, Los Angeles Times, New Republic, Atlantic, Time, Daily Beast, and Slate, The Constitution Today puts these individual puzzle pieces together for the first time. The book is organized by subject matter so readers may see the larger pattern of argument running through the individual pieces. Amar begins each of his ten chapters with a freshly composed overview describing how the individual essays came into being; how these pieces fit together; and how his constitutional views have fared in the broader legal and public discourse in the years since these pieces first appeared.

During what promises to be a momentous election, the book seeks to cut across traditional partisan divides offering a detailed and thorough examination on the history and the modern day implications and collective wisdom of the Constitution’s intergenerational text.

“Akhil Reed Amar knows the Constitution and loves the Constitution,” said Norman Ornstein, author of It's Even Worse Than It Looks. “That is true of many scholars. But Amar is among the very, very few who can write about the Constitution with not just deep knowledge but with insight, verve, passion, an understanding of both history and politics, and in a way that can be appreciated by legal scholars and lay readers alike. The Constitution Today shows Amar at his best, covering a wide range of areas with strong opinions that are anything but predictable and doctrinaire. At a time when many of the fundamentals of our system are under challenge, this book could not be more timely or welcome.” 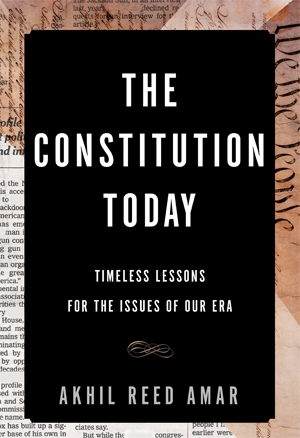 Amar has been favorably cited by Supreme Court justices across the spectrum in more than 30 cases. In various comprehensive surveys of judicial citations and scholarly citations, he invariably ranks among America’s five most-cited legal scholars under age 60. He is a member of the American Academy of Arts and Sciences and in 2008 he received the DeVane Medal—Yale’s highest award for teaching excellence. He has written widely for popular publications such as The New York Times, The Washington Post, the Wall Street Journal, the Los Angeles Times, The Atlantic, and Slate. He was an informal consultant to the popular TV show The West Wing, and his work has been showcased on more recent TV shows such as The Colbert Report, Charlie Rose, and The MHP Show.

In coordination with new book, Amar will lead a series of wide-ranging interactive conversations on a number of key themes from The Constitution Today. The events will take place across the country during September through November. The Cooper Lecture series, a free, public ten-session course on the Constitution taught by Professor Amar, will begin Monday, September 12, 2016. For more information on all upcoming events, click here.