Renowned tax expert Michael J. Graetz has published a new book titled “Follow the Money: Essays On International Taxation.” The book is a collection of essays written over the past two decades that examines issues surrounding international income taxation. 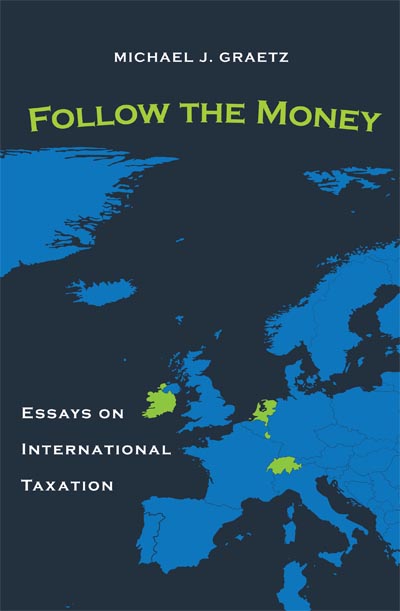 In his new book, Professor Graetz reveals how current international tax policy came into place nearly a century ago, critiques the inadequate principles still being used to make international tax policy, identifies and dissects the most prevalent tax avoidance techniques, and offers important suggestions for reform. Critics say the book is indispensable for anyone interested in international income taxation.

“This book collects Michael Graetz's most profound and influential works in international tax,” said Ruth Mason, the Hunton & Williams Professor of Law at the University of Virginia School of Law. “Graetz's work is the opposite of doctrinaire; he draws on history, politics, economics and legal and political theory first to identify the major problems and misconceptions in the area, and then to provide the tools to make sense of international tax. Anyone who hopes to learn about — much less teach or understand — international tax must read the works of Michael Graetz, and this new volume makes that essential reading accessible.”

“In this superb collection of nine essays — written over almost two decades  — Michael Graetz offers his readers a vivid account of the fundamental principles underlying thoughtful analysis of international taxation,” said Rick D’Avino, Former Vice President and Senior Tax Counsel of General Electric Company and GE Capital. “This collection is must-reading: for tax policymakers driving the U.S. Government’s response to shifts in the global economy, for academics seeking to evaluate potential responses or designing courses in international taxation, for tax executives, lawyers and accountants trying to guide corporations through the resulting thicket, and for concerned citizens wanting to learn more about this critical topic. Rather than reading every book on international taxation, anyone interested in navigating this important topic should read this collection instead. The reader will indeed be able to ‘follow the money.’”