Professor Oona A. Hathaway ’97 has been appointed as Special Counsel to the General Counsel for National Security Law at the Department of Defense (DoD). Hathaway will work for one year in this role during a leave of absence from her teaching post at Yale Law School. 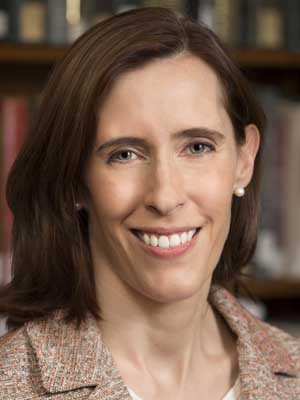 “I am excited to have the opportunity to work with the General Counsel and his outstanding staff. My first couple of months at the Pentagon have been ones of extraordinary change and turmoil."

Professor Oona Hathaway is the Gerard C. and Bernice Latrobe Smith Professor of International Law and Director of the Center for Global Legal Challenges at Yale Law School.

Professor Hathaway’s assignment falls under the Office of the General Counsel at the DoD, which is responsible for providing advice to the Secretary and Deputy Secretary of Defense regarding all legal matters among other duties.

"I am excited to have the opportunity to work with the General Counsel and his outstanding staff,” said Hathaway. “My first couple of months at the Pentagon have been ones of extraordinary change and turmoil—from the confrontation with ISIL in Syria and Iraq to the Ebola crisis (the Pentagon is playing a crucial role in the U.S. response) to the changing nature of U.S. engagement in Afghanistan.”

“I am honored to have the opportunity to support the work of the General Counsel in providing advice to the Department at this challenging time. I am certain that the experience I am gaining will allow me to teach and write more effectively on a wide range of national security and international law topics when I return to Yale,” added Hathaway.

Previously, Hathaway served as a Law Clerk for Justice Sandra Day O’Connor and for D.C. Circuit Judge Patricia Wald ’51, held fellowships at Harvard University’s Carr Center for Human Rights Policy and Center for the Ethics and the Professions, served as Associate Professor at Boston University School of Law, as Associate Professor at Yale Law School, and as Professor of Law at U.C. Berkeley. Her current research focuses on the intersection of domestic and international law.

Professor Hathaway received the Carnegie Scholars Award in 2004, serves on the Executive Committee of the MacMillan Center at Yale University, serves as a member of the Advisory Committee on International Law for the Legal Adviser at the United States Department of State, and has testified before Congress several times on legal issues surrounding the U.S. war in Iraq.