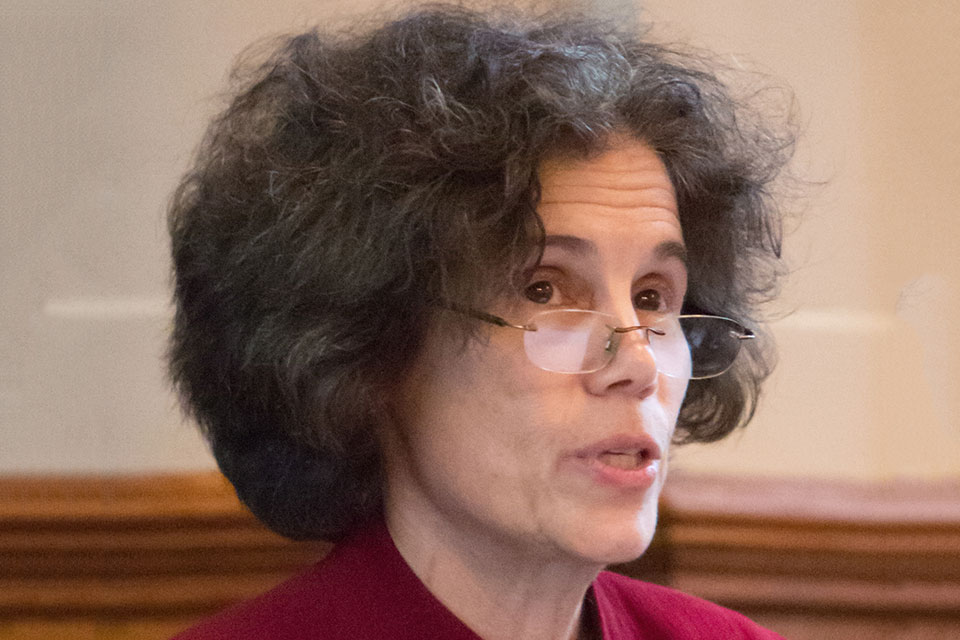 On April 25, 2018, Professor Judith Resnik, the founding director of the Arthur Liman Center for Public Interest Law at Yale Law School, was selected as a member of the 2018 class of Andrew Carnegie Fellows, awarded to support innovative scholarship on pressing contemporary issues.

Resnik is among a group of 31 extraordinary scholars and writers to receive the two-year grants that enable recipients to have time for sustained research and writing. Resnik, the Arthur Liman Professor of Law, received this fellowship to write a book, The Impermissible in Punishment: Whipping, Isolating, Disenfranchising—and Imprisoning. As she explains, the “question of punishment is not, of course, new, but what happens after sentencing and in prison has not been much in focus.”

The Andrew Carnegie Fellowship enables Resnik to trace the transnational history of prison reform and to analyze the remarkable efforts of individuals who, despite horrid conditions of incarceration, insisted that they were entitled to law’s protection and succeeded in gaining recognition as rights holders. Her goal is to explore the implications of that status for the legitimacy and legality of the totalizing control that is common in many prisons today. In short, this project analyzes how obligations of democratic states toward people in and out of prison are forged, and why the debilitation that many prison systems impose is beyond what governments should be able to inflict as punishment for crimes.

“I am thrilled that Judith Resnik's important scholarship has been recognized by the Andrew Carnegie Fellowship,” said Dean Heather Gerken. “I look forward to seeing what brilliant work she will produce in the coming years.”

This project reflects the central concerns of Resnik’s scholarship—the impact of democratic norms on government services such as courts, prisons, and post offices; the relationships of states to citizens and to non-citizens; the forms and norms of federalism; and equality and gender. At the Law School, Resnik teaches courses on courts, the structures of dispute resolution, federalism, incarceration, equality, prisons, and citizenship. In addition to being the Founding Director of Yale’s Arthur Liman Center for Public Interest Law, Resnik also chairs Yale Law School’s Global Constitutionalism Seminar, a part of the Gruber Program on Global Justice and Women’s Rights. She is also the editor of its six e-volumes, including Reconstituting Constitutional Orders (2017).

Resnik co-authored with Professor Dennis Curtis “Representing Justice: Invention, Controversy, and Rights in City-States and Democratic Courtrooms” (Yale University Press, 2011). The book examines the relationship between courts and democracy by exploring the evolution of adjudication into its modern form by mapping the remarkable run of the political icon of Justice and tracing the development of public spaces dedicated to justice: courthouses. Representing Justice was chosen by the Guardian as one of the best “legal reads” of 2011, and it received many awards, including two PROSE Awards for Excellence given by the Association of American Publishers, Outstanding Academic Title by Choice Magazine, and the Scribes 2012 Book Award given by The American Society of Legal Writers. In 2014, it won the bi-annual Order of the Coif book award. Her book, Migrations and Mobilities: Gender, Border, and Citizenship (co-edited with Seyla Benhabib, NYU Press, 2009) was likewise recognized as an outstanding academic volume.

Resnik is currently the chair of the Sections on Procedure of the American Association of Law Schools; she has also chaired its Sections on Federal Courts and on Women in Legal Education. She is a Managerial Trustee of the International Association of Women Judges. Resnik is a graduate of New York University School of Law, where she held an Arthur Garfield Hays Fellowship, and of Bryn Mawr College. She is a Member of the American Law Institute, a Member of the American Philosophical Society, and a Fellow of the American Academy of Arts and Sciences. Resnik also holds an honorary appointment at the Law Faculty of the University College London (UCL).

This year, the Center held its 21st Liman Colloquium “Who Pays? Fines, Fees, Bail, and the Cost of Courts.” More than 100 people gathered to consider how, in the last decades, growing numbers of people have sought to use courts, government budgets have declined, new technologies have emerged, arrest and detention rates have risen, and arguments have been leveled that private resolutions are preferable to public adjudication. Lawsuits challenge the legality of fee structures, money bail, and the imposition of fines. States have chartered task forces to propose changes, and new research has identified the effects of the current system on low-income communities and on people of color. The costs imposed through fees, surcharges, fines, and bail affect the ability of plaintiffs and defendants to seek justice and to be treated justly. The volume explores the mechanisms for financing court systems and the economic challenges faced by judiciaries and by litigants.

During the past few years, the Liman Center has also worked on projects related to incarceration. The Liman Center has joined with the Association of State Correctional Administrators (ASCA) to do a series of reports on solitary confinement. In 2015, ASCA and the Liman Center co-authored Time-in-Cell: The ASCA-Liman 2014 National Survey of Administrative Segregation in Prison. The report is the first to provide updated information, as of the fall of 2014, on both the numbers of people (80,000 to 100,000) and the conditions in solitary confinement nationwide. The data have drawn national attention; the federal government relied on this study to institute reforms. In 2016, Liman and ASCA co-authored Aiming to Reduce Time-In-Cell: Reports from Correctional Systems on the Numbers of Prisoners in Restricted Housing and on the Potential of Policy Changes to Bring About Reforms. Like the prior report, this monograph provides the only current, comprehensive data on the use of isolation. Data collection is underway for a 2018 report.