Professor Koh Argues on Behalf of Ukraine at World Court 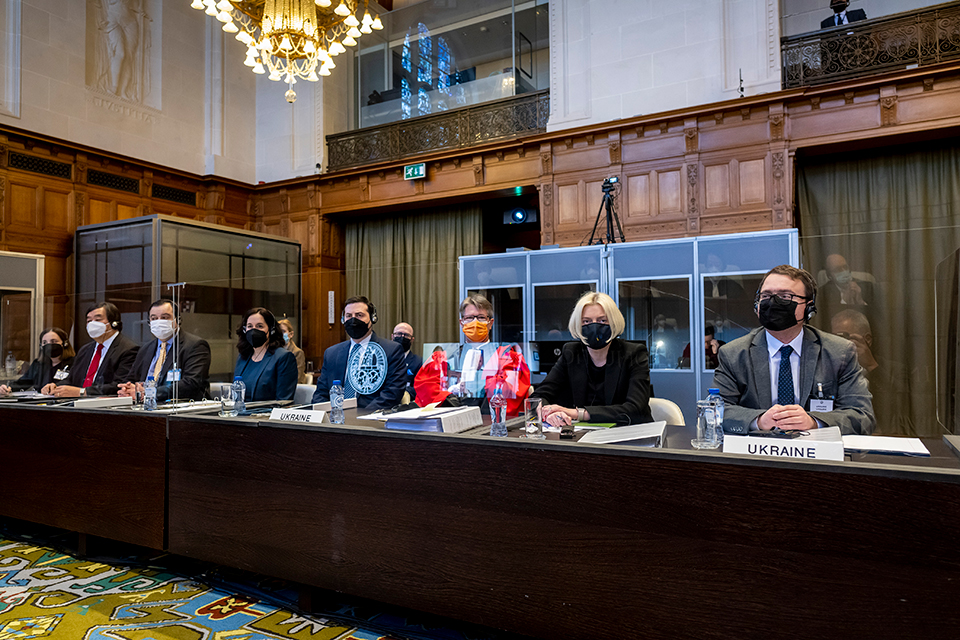 Members of the delegation of Ukraine, including Professor Harold Hongju Koh (second from left), at the opening of the hearing at the International Court of Justice.

A team of lawyers including Sterling Professor of International Law Harold Hongju Koh argued on behalf of Ukraine on March 7 in a suit filed against Russia at the International Court of Justice (ICJ) in the Hague.

On Feb. 26, Ukraine requested an urgent decision ordering Russia to halt all military action after its invasion last week. The request argued that Russia had created a judicial dispute regarding the application and interpretation of the 1948 Convention on the Prevention and Punishment of the Crime of Genocide (“Genocide Convention”), which both Russia and Ukraine have ratified.

Koh is the Sterling Professor of International Law at Yale Law School, where he has taught since 1985, and served as Dean from 2004­–09. He is one of the nation’s leading experts in public and private international law, national security law, and human rights. From 2009–13, he served as the 22nd Legal Adviser of the U.S. Department of State in the Obama Administration, and in 2021, he returned to the Office of the Legal Adviser at the start of the Biden Administration as Senior Adviser, the senior political appointee in that office.

Koh was previously involved in a Ukrainian case against Russia at the ICJ in 2017, after the downing of Malaysia Airlines Flight 17, when the Ministry of Foreign Affairs reached out for legal advice. That earlier relationship led to Koh’s involvement in the current case.

Russia has claimed “that acts of genocide have occurred in the Luhansk and Donetsk oblasts of Ukraine” as a basis for launching what it calls a “special military operation” against many Ukrainian cities.

Ukraine’s application argues that “[t]he parties…have a factual dispute as to whether genocide, which is defined by Article II of the Genocide Convention, has occurred or is occurring in the Luhansk and Donetsk oblasts of Ukraine.” And that “the parties also have a legal dispute as to whether, as a consequence of Russia’s unilateral assertion that genocide is occurring, Russia has any lawful basis to take military action in and against Ukraine to prevent and punish genocide pursuant to Article I of the Genocide Convention.”

At the hearing on March 7, Koh presented Ukraine’s closing argument in favor of appropriate provisional measures and asked for a prompt ruling.

Russia sent the court a letter saying that Russia “had decided not to participate in the oral proceedings.” Nevertheless, a court ruling is expected within weeks.

“The tragedy we are all watching in the streets of Kyiv, Kharkiv, Mariupol, Kherson, Volnovakha, and so many other Ukrainian cities is precisely what our modern international legal system was designed to prevent.”
—Professor Harold Hongju Koh

Koh called this a “singular case that until now, most have contemplated only in the hypothetical: a Permanent Member of the United Nations Security Council decides, with planned premeditation, to commit naked aggression and war crimes by launching a broad and brutal military campaign against an innocent neighbor and its civilian population, based on the false pretext that the target state is committing genocide. When confronted by such open illegality, is this Court utterly powerless to stop it?”

Koh went on to address the importance of the ICJ’s role in the postwar international legal order.

“The tragedy we are all watching in the streets of Kyiv, Kharkiv, Mariupol, Kherson, Volnovakha, and so many other Ukrainian cities is precisely what our modern international legal system was designed to prevent,” Koh argued. “If this Court does not act decisively against this level of aggression and atrocity, based on outrageous abuse of one of the world’s most important human rights treaties…why should any Permanent-5 U.N. Member see international law as a meaningful obstacle to what it might perceive as ‘necessary military action’? Then why wouldn’t we be forced to concede that the postwar international legal project has failed?”

Koh concluded by underscoring the ICJ’s role in the international community. “The provisional measures Ukraine requests are reasonable and achievable. You have undeniable legal authority to act. Anything less would fail to vindicate the rule of international law under these most dire of circumstances…[T]he world awaits your actions.”

In addition to Koh, Ukraine is represented before the ICJ by a team of litigators from Covington & Burling LLP, along with Professor Jean-Marc Thouvenin of Paris-Nanterre University. Ukraine’s Agents before the Court are Anton Korynevych, the Permanent Representative of the President of Ukraine in the Autonomous Republic of Crimea, and Oksana Zolotaryova, Director of the International Law Department in the Ministry of Foreign Affairs of Ukraine.