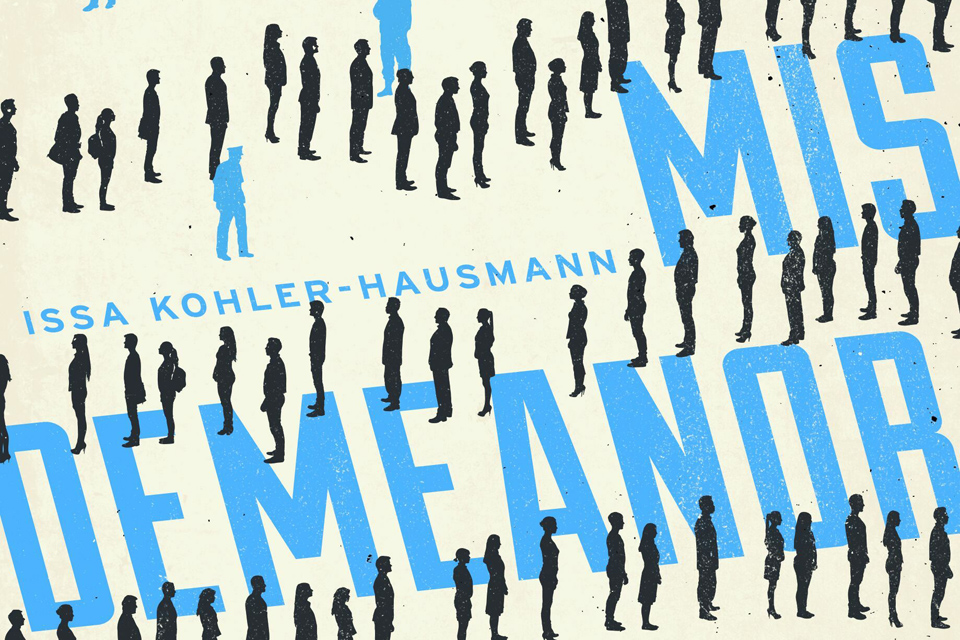 In her book Misdemeanorland: Criminal Courts and Social Control in an Age of Broken Windows Policing, Associate Professor of Law and Associate Professor of Sociology Issa Kohler-Hausmann ’08 contributes to the growing research on the U.S. criminal justice system by directing attention to the neglected yet central role that misdemeanors play in administering social control.

Misdemeanorland surveys misdemeanor justice in New York City. Beginning in the 1990s, the NYPD adopted a series of reforms classified under the rubric of “Broken Windows,” or quality-of-life policing. Law enforcement across the country heralded the model as an inspiration, but it was adopted with special enthusiasm by the New York City Police Department, which has generated almost 4.5 million misdemeanor arrests since 1995. Kohler-Hausmann asks the question, “What happens to all of those arrests when they arrive in courts?” After arrest, these people go into “misdemeanorland,” a colloquialism used by those who work in courts that receive the large volume of cases as a result of the city’s policing tactics. In New York City, like most major American cities with available data, misdemeanors are the majority of what the criminal justice system does, constituting somewhere between two-thirds to three-fourths of total criminal caseloads.

Many social science and media accounts of the U.S. criminal justice system tend to address prisons or policing. Between police encounters and jail time stands an institution assigned the important role of deciding which people identified by police will end up in jail, prison, or elsewhere: criminal court. Most legal and sociological models presume that the role of courts in the social control work of criminal law is to use the criminal process to sort the guilty from the innocent. But, as New York City’s lower criminal courts were flooded with arrests from the Broken Window’s policing model, Kohler-Hausmann argues that they adapted to these increases by largely abandoning an adjudicative model of criminal law administration in which questions of factual guilt and legal punishment drive case outcomes. They turned instead to what Kohler-Hausmann calls a managerial model—and, she notes, the implications are troubling. As her study details, misdemeanor courts marked, tested, and subjected to surveillance and control significant amounts of people, even though approximately half the cases result in some form of legal dismissal.

Due to procedural hassles, criminal justice marking, and ongoing compliance measures, people accused of minor crimes came to experience the justice system’s managerial power as arbitrary and dysfunctional. She describes in harrowing detail how the reach of America's penal state extends well beyond the shocking numbers of people incarcerated in prisons or stigmatized by a felony conviction.

Revealing and innovative, Misdemeanorland elaborates how the lower reaches of the New York criminal justice system exert social control and surveillance, often without adjudicating cases or imposing formal punishment. By offering a depiction of practices that have spread nationwide, it promises to expand and alter current understandings of the scope of criminal justice, while raising important questions about the need for transforming its practices.

Issa Kohler-Hausmann is an Associate Professor of Law at Yale Law School and Associate Professor of Sociology at Yale. She joined the Yale Law School faculty in 2014. Her primary research interests are in criminal law, criminal procedure, empirical legal studies, tort law, sociology of law, and legal theory. In her practice work, she practiced in felony and misdemeanor criminal defense, New York State freedom of information litigation, and parole matters.

Kohler-Hausmann has been most recently published in the Stanford Law Review, the American Journal of Sociology, and has work represented in many other journals and books. Her most recent publications focus on misdemeanor arrests in New York City and their use as a form of social control, and she has won awards for her writing from the American Sociological Association, the Law and Society Association, and the American Society of Criminology. Born and raised in Milwaukee, Wisconsin, she holds degrees from the University of Wisconsin-Madison, Northwestern University, Yale Law School, and a PhD in sociology from New York University.