Professors Hathaway and Shapiro Release Book on War and Conquest

Professors Oona Hathaway ’97 and Scott Shapiro ’90 have written a new book titled The Internationalists: How a Radical Plan to Outlaw War Remade the World (Simon & Schuster). 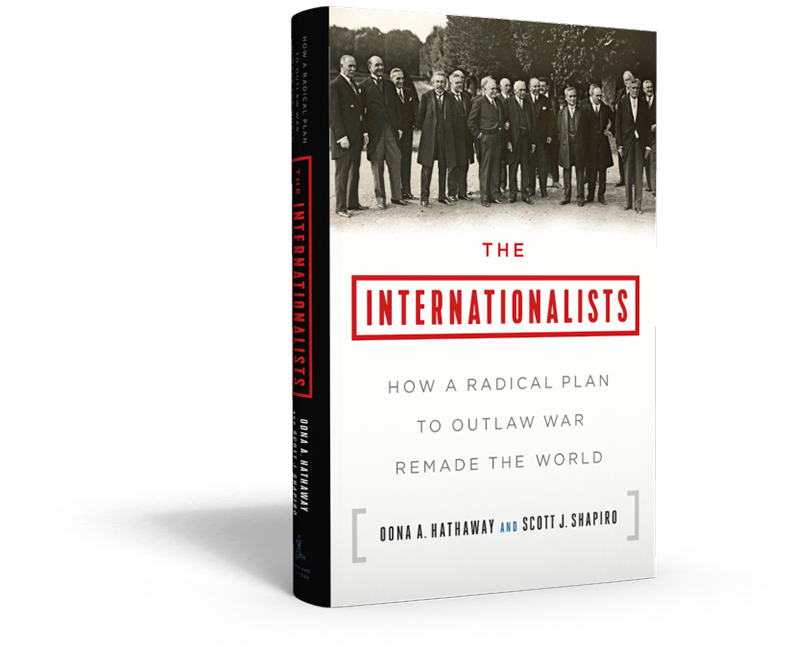 The book offers a bold and provocative history of the men who fought to outlaw war and how an often overlooked treaty signed in 1928 was among the most transformative events in modern history. The Internationalists examines with renewed appreciation an international system that has outlawed wars of aggression and brought unprecedented stability to the world map.

In a review in The New Yorker, Louis Menard writes: “Genuine originality is unusual in political history. The Internationalists is an original book." Margaret McMillian, writing for the Financial Times, says “A fascinating and challenging book, which raises gravely important issues for the present… Given the state of the world, The Internationalists has come along at the right moment.”

“Sweeping and yet personable at the same time, The Internationalists explores the profound implications of the outlawry of war,” says Paul Kennedy, Professor of History, Yale University, and author of The Rise and Fall of Great Powers. “Professors Oona Hathaway and Scott Shapiro enrich their analysis with vignettes of the many individuals (some unknown to most students of History) who played such important roles in this story. None have put it all together in the way that Hathaway and Shapiro have done in this book.”

In a related opinion piece in The New York Times, Hathaway and Shapiro write that although the Kellogg-Briand Pact of 1928 did not end war, it was effective in ending conquest. “Since World War II, conquest has almost come to a full stop. The average number of conquests per year fell drastically—to 0.26 per year, or one every four years. The average size of the territory taken declined to a mere 5,772 square miles per year,” Hathaway and Shapiro describe. “And the likelihood that any individual state would suffer a conquest in an average year plummeted—from 1.33 percent to 0.17 percent, or once or twice a millennium.”

Oona A. Hathaway is the Gerard C. and Bernice Latrobe Smith Professor of International Law at Yale Law School and the Director of the Center for Global Legal Challenges. She has published essays and opinion pieces in The New York Times, The Washington Post, Los Angeles Times, The Guardian, and Foreign Policy. She served as the Special Counsel to the General Counsel at the U.S. Department of Defense in 2014-2015, for which she was awarded the Office of the Secretary of Defense Award for Excellence. She is a member of the Advisory Committee on International Law for the Legal Adviser of the US Department of State and an active member of the US Supreme Court bar. She earned her BA from Harvard College and a JD from Yale Law School, where she was Editor-in-Chief of The Yale Law Journal.

Scott J. Shapiro is the Charles F. Southmayd Professor of Law and Professor of Philosophy at Yale Law School, where he is the Director of the Center for Law and Philosophy. He is also the Visiting Quain Professor of Jurisprudence at University College, London. He earned his BA and PhD degrees in philosophy from Columbia University and a JD from Yale Law School, where he was senior editor of The Yale Law Journal. He is the author of Legality and editor of The Oxford Handbook of Jurisprudence and the Philosophy of Law.