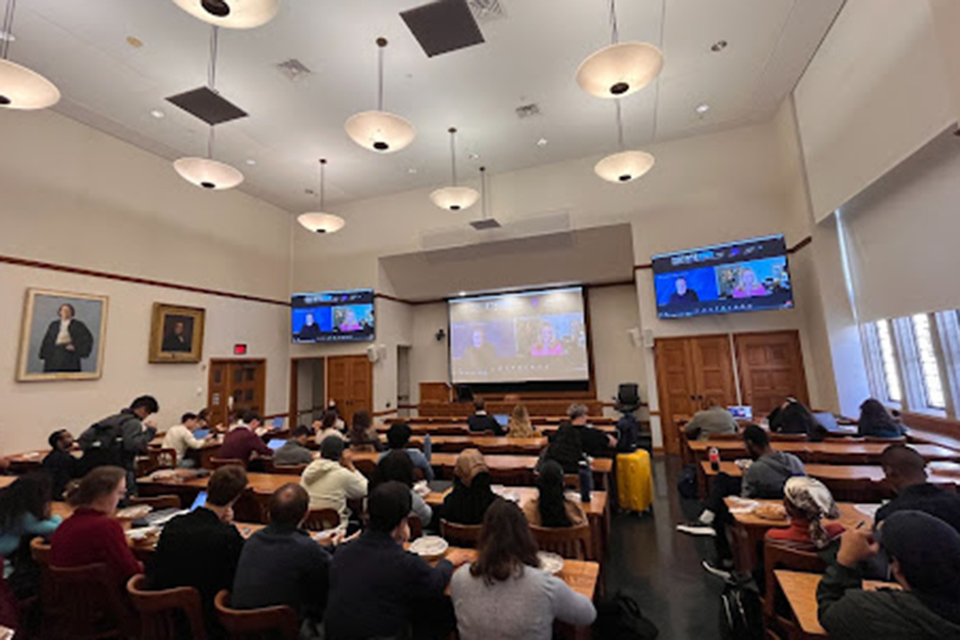 An audience listens to speakers on the panel, “Monkeypox: Science, Law and Governance of Pandemics.”

The Solomon Center for Health Law and Policy, in collaboration with the Yale Health Law and Policy Society (YHeLPS) and OutLaws, hosted a panel discussion “Monkeypox: Science, Law and Governance of Pandemics.” The Nov. 10 panel addressed the history and current status of the monkeypox response and how lessons from monkeypox could inform future pandemic governance challenges.

Rimoin began by describing the historical context of the current monkeypox outbreak. She placed monkeypox’s discovery in the history of smallpox eradication efforts. The virus was first identified in humans in the Democratic Republic of the Congo in the 1970s, when children unvaccinated against smallpox were identified as having had monkeypox. She went on to describe her own research and work to advocate for more attention to monkeypox and similar pox viruses, which, she noted, are at an increased risk of spreading as population immunity to smallpox declines. She ended by saying that monkeypox’s recent spread in new populations warrants new research collaborations and communication.

Omer continued the conversation by discussing monkeypox vaccines and therapeutics. He described how the United States built a vaccine stockpile for smallpox, and that one of the vaccines proposed for this stockpile was a candidate for approval as a monkeypox vaccine. He also noted that while there are no specific monkeypox treatments, other treatments are possible in specific circumstances. Omer therefore emphasized the importance of identifying monkeypox disease symptoms early.

Gonsalves discussed delays in the initial U.S. response to monkeypox, including waits to expand testing and increase access to vaccines beyond the national stockpile. These slow responses contributed to past patterns of inequity seen in the HIV response in the 1980s, he said.

Rimoin then turned to the international response, discussing how gaps in access to data and testing services emphasize the need for long-term surveillance for monkeypox and other diseases. Rimoin said that calls for health equity via vaccine distribution must be discussed with nuance. She explained that the conversation should also address underlying challenges such as vaccine distribution in places like the DRC, where even routine vaccines cannot be easily accessed.

Finally, Omer discussed the importance of consistent foreign aid for strengthening disease surveillance systems, and pointed out that the cost of such investments are often overestimated. He also called for improving both the science and the governance of pandemic responses to best prepare for future pandemics.

The panel ended with a brief Q&A session. Panelists discussed the importance of action to improve pandemic governance and said that lawyers must be involved in shaping improved health systems and creating policies “with teeth.”