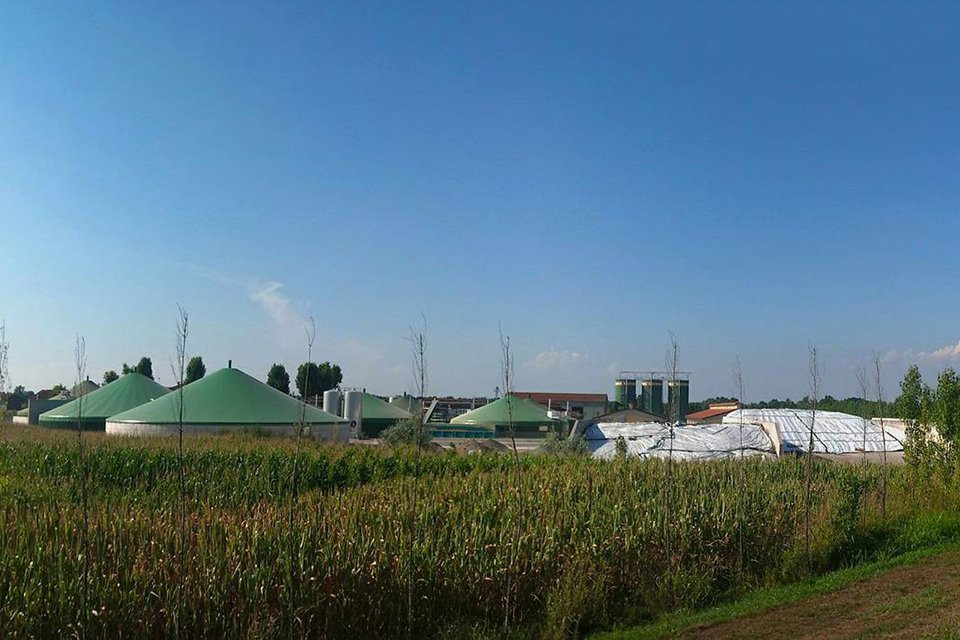 Caroline Parker ’23 is a LEAP Student Fellow and a student editor of the Law and Political Economy (LPE) Blog, where she has previously edited a symposium on the political economy of meat. In her first year of law school, she took LEAP’s Climate, Animals, Food, and Environmental (CAFE) Law and Policy Lab, where she and her team studied and produced a report on biogas capture on factory farms. Biogas capture, as Caroline explains below, is a practice that traps methane from large animal waste lagoons and sells it as “renewable” fuel. Often touted as a way to reduce emissions from CAFOs (confined animal feeding operations, also known as factory farms), Parker’s research on biogas capture reveals severe shortcomings in its ability to lessen the environmental harms caused by CAFOs.

LEAP Program Fellow Noah Macey spoke with Parker about her ongoing research. Their conversation has been edited for clarity.

Could you give an overview of your biogas project and how you started working on it?

I first encountered the biogas phenomenon as a 1L when I was enrolled in the CAFE Lab. My research team, which included people from a bunch of different schools, decided to research policy interventions to address waste management problems in CAFOs, which was not something that I knew very much about. We did an initial review of past failed regulatory attempts to address the problem, and we looked at what people in the field were talking about. Biogas and anaerobic digesters came to the fore as one proposed solution.

Environmental responses to CAFO waste fall into two buckets. One bucket attempts to restructure the way animals are farmed, by moving them out of confinement facilities and back onto land, under conditions where their waste is automatically reincorporated into soil. The other are attempts to mitigate environmental impacts under the current regime, keeping the basic, consolidated structure of the industry intact. Anaerobic digestion is definitely in the second bucket. It’s an attempt to keep the farms the same size and deal with the externalities from waste lagoons by building technology on top of them.

This issue had divided a lot of people in the ag policy world, and my team decided we were going to look for potential compromises, a middle path for thinking about biogas. But by the end of the semester, having dug into the data on the science and economics of anaerobic digestion and gas capture, I came to believe that subsidizing this stuff was a really, really bad idea and that something was missing in the policy discussion. I became very curious to understand the institutional and legal factors that were enabling people to invest a lot of money and take this idea seriously as a solution to the problems associated with CAFOs.

Could you explain how biogas capture and anaerobic digestion work?

In my paper I use the phrase “gas capture” to refer to technology designed to capture the methane emitted by the pools of animal waste that are located next to CAFOs. There is a range of technological sophistication. The most low-tech ‘biogas solution’ is just slapping a tarp over the lagoon to capture the gas as it’s rising off the manure. At the other end of the spectrum there are super high-tech machines called “anaerobic digesters,” which help expedite decomposition and maximize the extraction of methane. These machines are built above ground and require the waste to be pumped in.

The purpose of all of these technologies is to capture methane that would otherwise enter the atmosphere. Because methane is such a potent greenhouse gas, burning it (which releases CO2), reduces the greenhouse effect. The early gas capture projects were primarily focused on capturing and immediately destroying “raw” biogas on the farm. But now there are increasingly efforts to capture and refine the biogas in order to sell it to other people as a low-carbon or “carbon-negative” fuel, which brings in lucrative subsidies.

There are two points that I want to emphasize from my research: The first is that methane is not an inevitable byproduct of animal waste. It’s only when manure is kept in these huge lagoons that it produces all this methane. And these lagoons are only necessary on huge, consolidated farms where you have tons of animals living confined indoors.

The second is that the potential for profit here only exists because the industry and the emissions are unregulated. A core tenant of carbon offsetting is that the reductions have to be “additional”— so, if companies were legally required to mitigate their methane or produce in a low-methane way, none of this would be monetizable. The biogas industry requires background conditions of deregulation.

You mentioned that this topic is divisive. Why is that?

I think the divide on biogas reflects the divide about whether you think that huge, massive, consolidated factory farms are an inevitable part of the food system. If they’re always going to be around, it makes sense to capture what methane you can and reduce the environmental impact. Essentially, if you think the only problem with these farms is the methane, then gas capture could seem like a good solution.

But if you think that factory farming is bad for other reasons — because of other co-pollutants that have a more localized impact, or because of antitrust or corporate power reasons, or because of the impacts on animals and animal suffering — then paying farmers to keep producing these externalities by buying methane seems like a horrible idea. So, I think the distinction largely tracks people’s views about the current consolidated state of the industry.

So, after you finished CAFE, you decided to investigate the legal and institutional reasons that biogas capture is gaining traction. What have you found?

I felt like I had stumbled into a fascinating and troubling case study — not just of bad agriculture or farming policy, but of bad environmental policy. The situation reflects a lot of the deficiencies of offset-driven, market-based approaches to climate change and emissions reductions. So, while I first want to understand the forces driving the biogas industry specifically, I also wanted to try to understand the ways it reflects broader problems in the prevailing approach to environmental policy in the United States, which reflects the prevailing approach to environmental policy globally.

The research paper I’m working on traces the origins of this way of thinking about methane emissions on farms and the legal regime that allows the industry to exist. In it, I try to explain why state investment in biogas is a bad idea and what sort of lessons there are for other emissions reductions proposals.

Through this paper, I connected with Lee Miller, who teaches environmental and food law at Duke, and has worked on lots of projects involving the hog industry. He’s specifically interested in the growing biogas industry in North Carolina, and pitched writing a piece about it for the LPE Blog, where I was putting together a symposium about law and factory farming. It was perfect timing in terms of my own interest in the subject, so we connected and I spent last summer working with him researching biogas in North Carolina. Together, we got a better handle on the numbers from a climate standpoint — how much methane and money are at stake, etc. — in this industry that’s on the verge of taking off. There’s a lot of public and private sector investment going into building out the infrastructure, to cultivate and distribute biogas as an alternative to fossil natural gas using the existing pipeline system.

What are some other environmental policy areas that you think could take lessons from the development of biogas?

I think this is a really good case study that demonstrates the concerns that environmental justice organizers have been voicing about carbon offsets for decades now. Which is that offset-thinking takes a big, complex problem and reduces most of that problem away and only focuses on carbon. So, CAFOs produce methane, which is bad for the climate, but they also produce horrible local impacts. Focusing on biogas digesters pushes those other problems — ones that are place-based and affect specific people — into the background when they’re the favored policy “solution” to factory farming. That’s not a specific answer to the question, but I think it’s a point that’s generally applicable to lots of offset proposals. Professor Michael Mendez refers to this as “carbon reductionism”: reducing big, complicated problems to their carbon components alone. I think the biogas capture phenomenon is a great example of that.

Another element that I’ve identified as driving and enabling biogas to move forward is the way that state renewable energy law defines (or doesn’t define) what kinds of energy are or aren’t eligible for environmental or climate subsidies from the state. Policymakers need to be precise and intentional in how they define what’s renewable for the purpose of renewable energy portfolio standards or low carbon fuel standards. What we define as renewable isn’t just renewable in the sense of “able to be recreated,” but should be compatible with the sort of low-carbon future that we want. To me, it’s clear that factory farming isn’t part of this vision, so defining biogas as renewable for the purposes of renewable energy subsidies is a bad idea. A lot of biofuels, I think, could fall into this category. Trees, you know, are “renewable” in that you can grow more of them, but burning trees is not a good way to power our low-carbon future.

One other lesson, I would say, is that the biogas situation shows the urgent need for coordination and direction, probably centralized coordination and direction, in decarbonization policy. This means a greater role for the state. Deferring these decisions to individual actors who are making piecemeal, marginal changes to things is a bad way to decarbonize. For instance, there are tons of companies pledging to reduce their emissions by using more biogas. There are so many pledges, in fact, that there’s just not enough gas to go around, even if we installed a digester on every farm! From an individual-company perspective, these targets seem reasonable — only someone taking an industry-wide view would be able to notice that it’s totally unrealistic.