Q&A: Peter Lehner on the Science, Law, and Policy of Climate-Neutral Agriculture 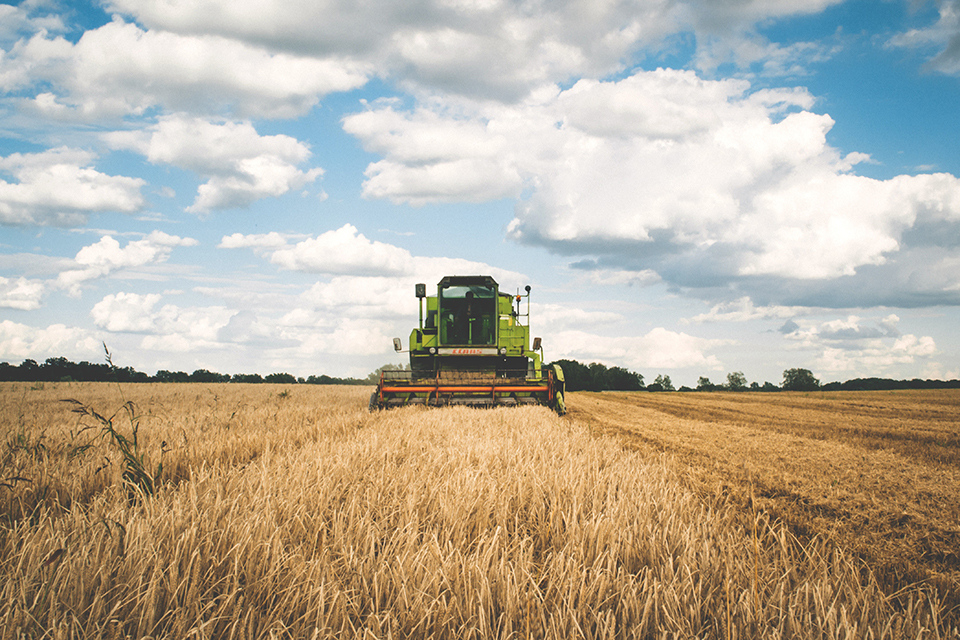 In his new book with Nathan A. Rosenberg, Farming for Our Future: The Science, Law, and Policy of Climate Neutral Agriculture, Visiting Lecturer in Law Peter H. Lehner details U.S. agriculture’s substantial contributions to climate change and offers a comprehensive strategy to convert the sector into one that is climate-neutral — or better. The book builds upon Lehner’s experience as Managing Attorney of the Sustainable Food and Farming Program at Earthjustice. Before joining Earthjustice, Lehner served as the Executive Director of the Natural Resources Defense Council from 2007–2015 and Chief of the Environmental Protection Bureau of the New York State Attorney General’s Office from 1999–2006. He teaches a seminar on food systems and U.S. environmental law at Yale Law School. In this Q&A with the YLS Law, Ethics & Animals Program, Lehner explains how U.S. farms and ranches can become a major part of the climate solution, while promoting food security, protecting biodiversity, strengthening rural communities, and better supporting the workers who cultivate our crops and rear our animals.

You just published Farming for Our Future: The Science, Law, and Policy of Climate-Neutral Agriculture. What led you to write this book now? 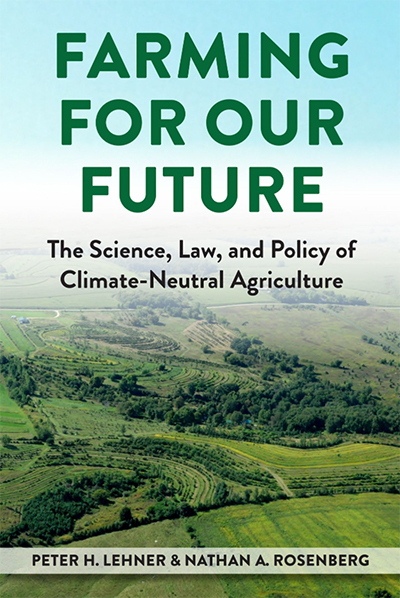 Policymakers, farmers, and others are beginning to see that our current agriculture system has some major weaknesses. It produces a lot of inexpensive commodity food, but the COVID-19 pandemic showed its vulnerabilities to bottlenecks and breakdowns. The more frequent storms, droughts, wildfires, and other extreme weather that climate change is bringing are disrupting farming and ranching operations around the country. Our crisis of obesity, diabetes, and other chronic diseases heavily influenced by diet is ringing alarm bells. So policymakers on the Hill, at the federal agencies, and in the states are finally are starting to pay attention to agricultural pollution and the need to reform our food system. But for decades, most people overlooked agriculture as a major source of pollution — and most still do not grasp agriculture’s role in the climate crisis, both as an accelerator and as a potential solution.

I’ve been an environmental attorney for decades, and I’ve seen firsthand how devastating agricultural pollution can be, and how difficult it is to control. For example, while working at the New York State Attorney General’s office, I saw numerous cases of fertilizer, pesticide, and manure runoff harming drinking water. Unlike other sources of water pollution, this agricultural pollution was largely unregulated, because of exemptions written or read into the Clean Water Act. Yet, since I also help manage some farms, I’ve seen that changes to traditional practices can dramatically reduce pollution, increase habitat, and — as we have done — achieve true climate-neutrality.

A few years ago, Professors Michael Gerrard and John Dernbach invited us to write the chapter on agriculture for Legal Pathways to Deep Decarbonization in the United States, which sets out strategies to reduce greenhouse gas emissions from a variety of industries. As my co-author Nate Rosenberg and I were researching that chapter, we found that agriculture largely has been left out of the conversation about decarbonization efforts. Agriculture’s contribution to climate change is very different from the release of carbon dioxide from the burning of fossil fuels, which is what most people think about. Cows and sheep belch enormous amounts of methane — a greenhouse gas 85 times stronger than carbon dioxide over 20 years — and much excess nitrogen fertilizer converts to nitrous oxide, which is almost 300 times more potent a greenhouse gas. In addition, while natural healthy soils hold a lot of carbon, most agricultural soils have been stripped of much of that carbon. So the opportunities to slow climate change comes from reducing methane and nitrous oxide emissions and increasing the carbon stored in agricultural soils and plants.

As we dug in, we researched the technological and agroecological opportunities to reduce greenhouse gas emissions; there was not much out there directed to policy makers and too much vague hype. But there are already many carefully researched articles on very specific issues that we could pull together as well as the work of thousands of pioneering farmers and ranchers that show that many practices can significantly reduce greenhouse gases and allow soil and vegetation to store large amounts of carbon. We tried to lay an accurate factual foundation for the policy review and recommendations in our chapter.

Our publisher, the Environmental Law Institute, then suggested we consider updating the chapter to include the 2018 Farm Bill and expand a few points. Nate and I thought that would be easy, but it took a lot more work than we expected! We added some chapters digging deeper into farm and rural constituencies, the science, a wider range of policy options, and other aspects of the food system. We hope Farming for Our Future will help bridge the gap that currently exists between general knowledge of the issue and the great opportunities the sector presents. Ultimately, the book sets out the path by which we can rewrite our relationship with farming and invest in practices that reframe agriculture from a major climate problem to a powerful climate solution.

In Farming for Our Future, you show that U.S. agriculture contributes far more to the climate crisis than most people realize. What is the impact of underestimating agricultural emissions?

The Environmental Protection Agency’s inventory of greenhouse gas emissions estimates that agriculture contributes only about 10% of U.S. greenhouse gas emissions. However, this estimate does not include essential components of agriculture. For instance, energy use and the impact of agricultural inputs are listed elsewhere in the Inventory. Similarly, industrial farming practices aggressively disrupt the soil, releasing stored carbon into the atmosphere, but EPA’s estimate puts elsewhere in the Inventory the emissions from land conversion and the associated loss of stored carbon to agriculture.

In addition, EPA evaluates global warming impact over a 100-year time period. However, most policy debates are looking at targets far sooner, such as by 2050, so it makes more sense to use a 20-year global warming potential. Since much of agriculture’s climate impact comes from emissions of methane, this important change in perspective significantly increases agriculture’s share of total greenhouse gas emissions.

Our analysis shows that agriculture’s contribution to climate change is about the same as that of the transportation sector. Failing to recognize this reduces the urgency policymakers feel about addressing our food system and helping to convert agriculture into a climate solution.

You argue we can eliminate net greenhouse gas emissions from U.S. agriculture. How?

For instance, aggressive agricultural tillage of soil and pesticide application have left the soil deprived of nutrients. Farmers seek to compensate for this with heavy doses of fertilizer. Indeed, studies show that on average about twice as much fertilizer is applied to U.S. cropland than the plants can use. The fertilizer not taken up by plants runs off into waterways or converts into nitrous oxide. Yet soil can be restored to biological health and greater natural fertility. Reduced tillage, cover crops, perennial crops and other practices can restore nutrients in the ground. This reduces the need for fertilizers — saving farmers money — and the amount of nitrous oxide released into the atmosphere, as well as increasing the carbon stored in the soil and plants.

What was one of the most exciting things you found?

The potential of perennial agriculture. While we can (and must) significantly reduce emissions from animal agriculture and annual crops, to make agriculture climate-neutral, we’ll need to substantially expand the number of trees, shrubs, and other perennial plants on our country’s farms and ranches. We can do this by intercropping tree crops, establishing perennial pastures, introducing riparian and field buffers, and adding trees to pasture, among other methods. Perennial plants produce more biomass than shorter-lived annuals and this additional biomass stores dramatically more carbon. Even conservative estimates find that perennial practices sequester two to five times more carbon per acre than the most effective annual practices. Unfortunately, U.S. farm policy discourages perennial agriculture. To give perennial agriculture equal footing, we’ll need to make a series of important changes to USDA’s research, conservation, and subsidy programs.

Your book examines hundreds of changes to existing law and policies that could accelerate the adoption of climate-friendly farming practices. What are some of the most powerful reforms that the Biden administration could implement immediately?

And this is all just what can be done under current law. Congress has the ability in the 2023 reauthorization of the Farm Bill to make establish many stronger incentives for climate-friendly practices, but that will require broad political agreement.

You find that a relatively small number of large industrial animal operations produce an outsized share of the agricultural sector’s greenhouse gas emissions. As it stands, these operations are exempt from most environmental laws. You identify regulatory strategies that could reduce emissions from animal agriculture operations, but is the adoption of these strategies politically plausible?

Relatively few industrial animal operations produce most agricultural emissions. Greenhouse gas emissions are heavily concentrated in a small proportion of the largest operations: for example, over 50% of dairy cows in the United States are in the 4% of operations that stock 1,000 or more dairy cows. Overall, the largest animal production facilities — fewer than 6% of all facilities — produce 89% of the animals and about 85% of the direct greenhouse gas emissions of all animal production. These large facilities almost all surely emit far over the standard air toxics regulatory threshold of 10 tons per year. EPA has the authority under the Clean Air Act, should it decide to exercise it, to require reporting of or limits on these emissions or require implementation of best management practices.

Similarly, the largest animal production facilities handle the tremendous amounts of manure they generate by collecting it in lagoons and then spreading it onto fields. These systems produce more water pollution and substantially more methane than other manure management systems. EPA could also impose greater environmental protections on these practices.

It’s also important to convey that the bucolic family farm many people associate with agriculture in the United States bears no relation to the large-scale industrial operations that actually dominate production. Addressing agriculture’s contributions to climate change requires us to wrestle with our perception of farms and recognize reality. This is tough because farm lobbyists don’t want consumers to see this. The American Farm Bureau Federation and its state bodies are very influential. In addition to representing large-scale farmers, the Farm Bureau represents the views of the large agricultural processors, insurance companies, and agrochemical multinationals, who collectively hold an immense amount of power. Despite not being aligned with much of the public (for example, its more than 200-page policy platform opposes same-sex marriage, multilingual ballots, any expanded gun control or background checks), the Farm Bureau has clout with most lawmakers. Many of the policies it supports hurt sustainable farmers and rural communities. A better understanding of the reality of agriculture and agricultural lobbyists is a critical first step to reversing that power imbalance.

What advice do you have for students and others seeking to promote climate-friendly agriculture?

Reading the book is a great place to start. I’d encourage advocates and rising decision-makers to become familiar with the climate-friendly agricultural practices and the legal and policy changes we need to support widespread adoption of those practices. Anyone who has that information will be one step ahead of many policymakers. Food and farming connect us to the earth and to each other, which means we all have a stake in promoting resilient and climate-friendly agriculture.