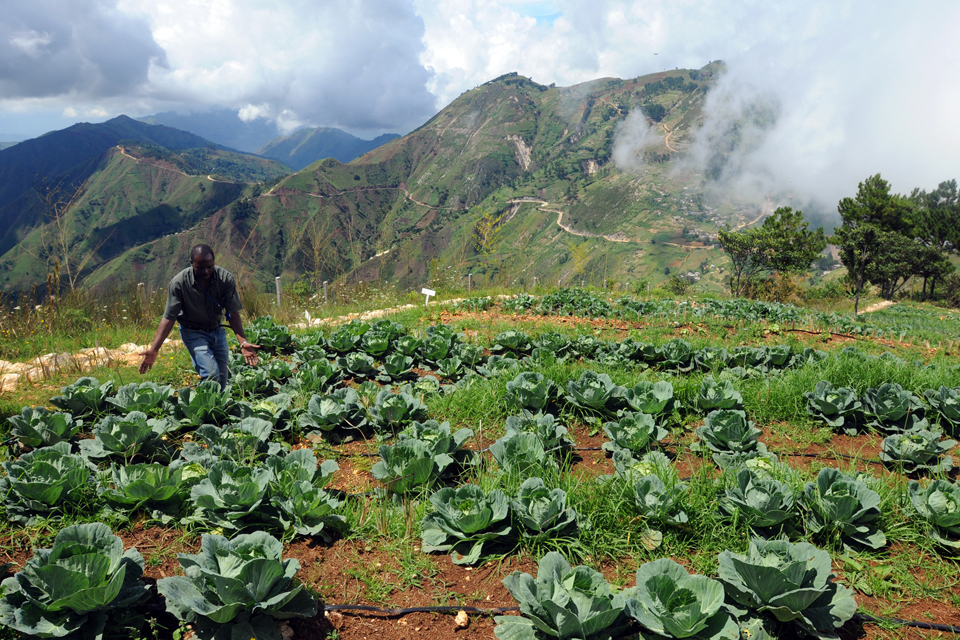 A paper submitted on November 15, 2017, to the U.N. Special Rapporteur on the Right to Food analyzes the harm that large-scale development projects, particularly in agriculture, cause for the food security of Haiti’s rural population. The study titled “How Agribusiness Threatens Haitian Peasant’s Human Right to Food,” prepared by the Allard K. Lowenstein International Human Rights Clinic at Yale Law School, details the way these projects have been designed and implemented without participation from the communities they affect.

The Lowenstein Clinic wrote the paper in collaboration with the Haitian Platform for Alternative Development Advocacy (PAPDA), a group of civil-society organizations, movements, and collectives advocating for just development in Haiti.

The paper finds that although the majority of Haitians make their living as subsistence farmers, the Haitian government relies on imports to satisfy the country’s basic needs and has failed to invest in improving agricultural production in the country’s rural areas. Instead, the Haitian government has made investment in agribusiness, tourism, mining, and free trade zones its economic priority.

“Promoting mega-projects in these sectors has tended to displace and marginalize Haiti’s peasant population,” said Lara Domínguez '17, one of the student authors of the report. The paper describes Agritrans, a large-scale banana plantation owned by Haiti’s President Jovenel Moise. “The development of Agritrans, without consultation with the local peasant population, displaced 800 peasant households from their land in August 2013,” Domínguez said.

The Clinic’s paper analyzes the threat to Haiti’s food security from mega-development projects through the peasants’ rights framework, an approach developed by a movement of subsistence farmers, fisherfolk, pastoralists, indigenous people, and rural workers for protecting human rights particularly relevant to their ways of life and well-being. Pressured by La Via Campesina, a global peasants’ movement, a committee of the U.N. Human Rights Council has prepared a draft Declaration on the Rights of Peasants and Other People Working in Rural Areas.

The central principle of the peasants’ rights framework is that individuals who live on the land have a special relationship with the land that permeates all aspects of their lives. This framework recognizes that the effects of development-induced displacement go beyond the acreage of land lost.

Julia Shu '17, another student author of the report explained, “Displacement disrupts community networks, cultural identity, and customs and leaves peasants unable to be self-sufficient, to secure access to justice, and to exercise their rights of participation and expression.”

The paper emphasizes that mega-development projects and the resulting displacement of peasant communities violates the right to food. “In emergencies, the right to food often means that the State must provide food to people who would otherwise be unable to secure it,” said James Silk '89, Binger Clinical Professor of Human Rights and Director of the Lowenstein Clinic, who supervised the Clinic’s study. “But in ordinary times, protecting the right to food means making sure that people can buy or produce their own food. When governments or corporations force vulnerable populations off their land and away from water, other necessary resources, and their communities, it deprives them of access to adequate food.”

In a letter accompanying the paper, the Clinic asks the U.N. Special Rapporteur on the Right to Food to undertake a mission to Haiti to investigate the impact of agribusiness and other megaprojects and private investments on Haitian peasants. The Clinic calls on the Special Rapporteur to urge the government of Haiti to uphold peasants’ rights.

“This issue is urgent,” said Elizabeth Marsh '17, a co-author of the report. “Food insecurity is only going to get worse with climate change, so the Haitian government must implement sound environmental policies, commit to rural development and local agricultural production, and take effective steps to protect peasants’ rights.”

For more information, please contact Charlotte Finegold at charlotte.finegold@yale.edu or (203) 432-8368.