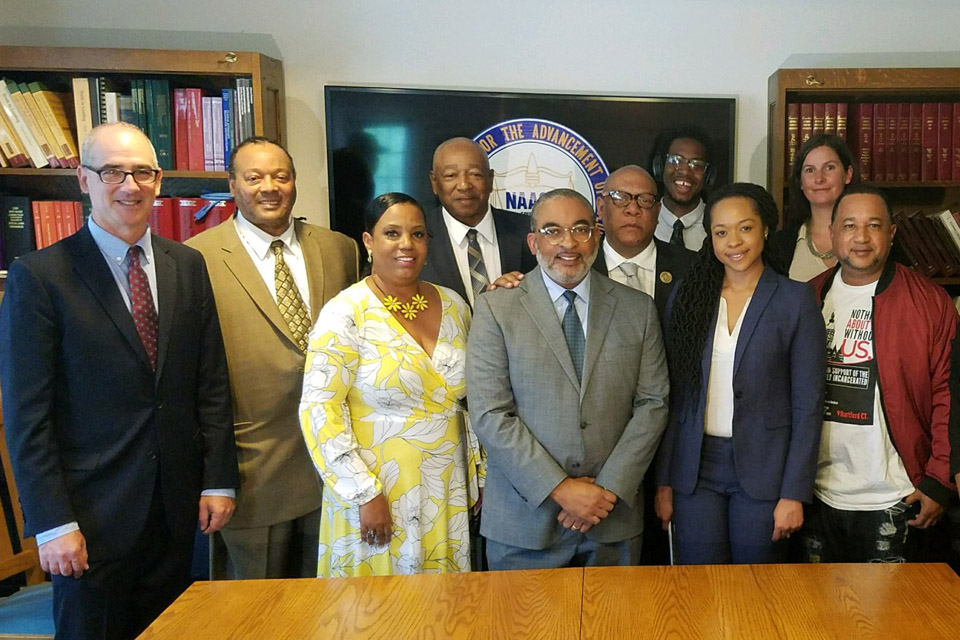 Members of the Rule of Law Clinic and NAACP during a press conference announcing the lawsuit on June 29, 2018.

Yale Law School’s Rule of Law Clinic has filed a lawsuit together with The National Association for the Advancement of Colored People (NAACP), the NAACP Connecticut State Conference, and five individual NAACP members against the State of Connecticut challenging the practice known as “prison gerrymandering.”

The lawsuit, filed June 28, 2018, in the U.S. District Court for the District of Connecticut, is the first statewide challenge to the practice of counting prisoners as residents of the state legislative districts where they are incarcerated instead of in their home districts.

Connecticut, like many states, disenfranchises prisoners and has concentrated its prisons primarily in rural areas. The effect is that white, rural voters in the districts where prisons are located have their electoral power unconstitutionally inflated, at the expense of voters of color in other, overcrowded districts, according to the complaint.

“Prison gerrymandering is an unconstitutional and intentional misrepresentation of voting power that we are committed to ending,” said NAACP President and CEO Derrick Johnson. “This practice is one aspect of a war of voter suppression targeting communities of color and reducing the integrity of the vote.”

The plaintiffs seek to compel the State of Connecticut to adopt a new redistricting map that counts incarcerated individuals in their home state legislative districts rather than in the districts where they are being incarcerated, thereby safeguarding the Fourteenth Amendment principle of “one person, one vote.”

“This process is a stain on our democracy and a violation of the equal protection clause of the 14th Amendment,” explains Bradford Berry, General Counsel of the NAACP. “Like other forms of voter suppression, it reduces the power of one community while inflating the power of another and it’s time to end it.”

Although a number of states continue to engage in this practice, Connecticut has some of the worst discrepancies in population numbers between its prison districts and most populated districts, according to the clinic. When prisoners are reallocated to their home districts, the population of District 59, where three state prisons are located, has an overall population that is more than 15% smaller than the most populated district in the state, the complaint states. The effect is that the vote of a person in that prison district counts for 15% more than each vote of a person in the largest district.

“Connecticut is a state of extreme inequality with wealth concentrated in the suburbs and poverty in our urban areas; prison gerrymandering represents another way in which resources disproportionately favor suburban communities,” said Scot X. Esdaile, President of the NAACP Connecticut State Conference. “Our members are directly impacted by this process which not only siphons off our families through mass incarceration but siphons off our political power as well.”

“This is about making sure everyone gets an equal voice,” said Germano Kimbro, a formerly incarcerated individual and plaintiff in the case. A resident of District 97, one of the most overpopulated state legislative districts in Connecticut, Kimbro argues “My vote shouldn’t count less than someone else’s just because they live near a state prison.”

“The Equal Protection Clause requires State governments to follow the principle of ‘one person, one vote’ when drawing legislative district lines. Each person’s vote is to be equal to that of their fellow citizens,” explains Alden Pinkham ’20, a student in Yale Law School’s Rule of Law Clinic. “Using prisoners to inflate the population of the districts where prisons are located violates this principle.”

The plaintiffs in the lawsuit are represented by the Rule of Law Clinic at Yale Law School and the NAACP.

For additional information, please contact the Yale Rule of Law Clinic at: ROLCPG@mailman.yale.edu or visit the case webpage.

Founded in 1909, the NAACP is the nation’s oldest and largest nonpartisan civil rights organization. Its members throughout the United States and the world are the premier advocates for civil rights in their communities.

The Rule of Law Clinic was founded at Yale Law School in the fall of 2016 to protect the rule of law against contemporary challenges. The clinic focuses on maintaining U.S. rule of law and human rights commitments in four areas: national security, antidiscrimination, climate change, and democracy promotion.