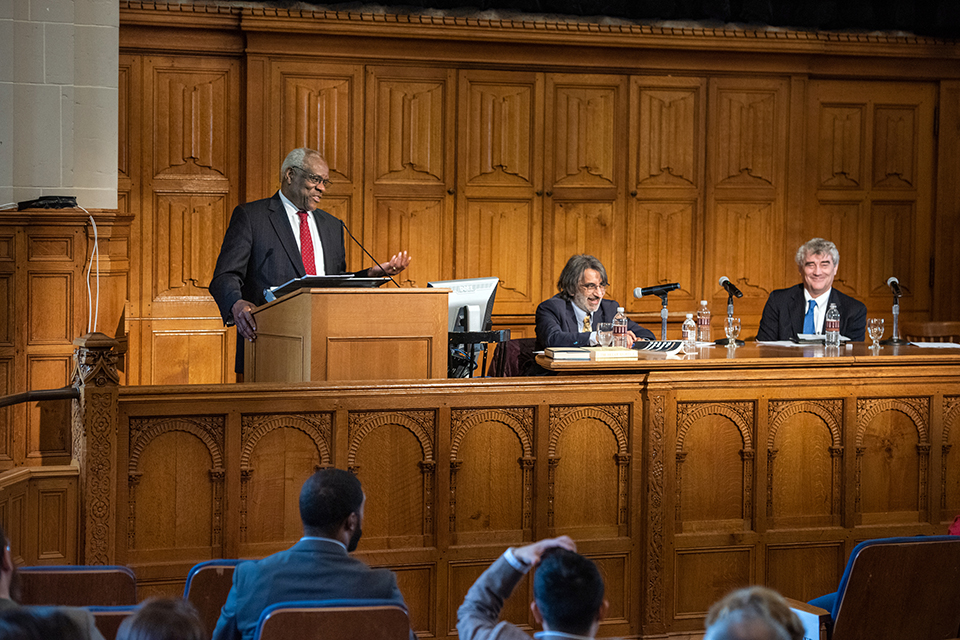 Along with Justice Thomas’s keynote address, the conference included a roundtable discussion with audience participation.

Introducing Justice Thomas at the keynote address, Calabresi described him as “the leading originalist in the country,” and “the Justice who’s written the most originalist opinions of any Justice who’s served on the Court.”

Originalism asserts that in interpreting the Constitution, all statements must be interpreted based on the original understanding of the words at the time they were written.

Justice Thomas’s keynote candidly discussed his upbringing, life at the Law School and on the Court, and his beliefs about originalism.

“It is difficult to tell the modern story of originalism without Yale Law School,” he said, though he went on to disagree with the tenets of legal realism, the 20th century approach to law for which the Law School is well-known. He identified the origins of modern-day originalism as a rejoinder to the thinking that the language of the Constitution is adaptable to accommodate a contemporary society.

“Words have meaning at the time they are written. When we read something that someone else has written, we give the words and phrases used by that person natural meaning in context,” Justice Thomas said.

For Justice Thomas, originalism is the only legitimate method of Constitutional interpretation, and it provides stability to the republic. To not interpret laws based on their meaning when they were enacted “usurps power from the people,” he said. Judges who are unelected, he said, should not wield so much power in a democratic republic.

The idea of the stability of the law has influenced Justice Thomas since his time at the Law School. In many arenas, the law seemed too flexible and changed with personal policy preferences. Justice Thomas said he gravitated toward courses in law school that seemed more immutable, like bankruptcy law.

“In so many of my other courses, the law seemed to be much more pliable, and perhaps much too pliable. It appeared to take shape and ebb and flow based on preferences and prevailing popular opinions,” he said.

The Constitution does not belong to judges or scholars, Justice Thomas said. Instead, it belongs to citizens, and originalism rests on two self-evident truths: “the idea that words mean something and that government is of the people, by the people, and for the people.”

The Rosenkranz Originalism Conference at Yale Law School brings prominent academics and jurists to Yale for a day-long conference each semester to discuss and debate various approaches to and critiques of originalism in constitutional thought and practice. The initiative is led by Visiting Professor Steven G. Calabresi ’83 and Professor Akhil Reed Amar ’84 and is sponsored by Nicholas Quinn Rosenkranz ’99, Professor of Law at Georgetown.