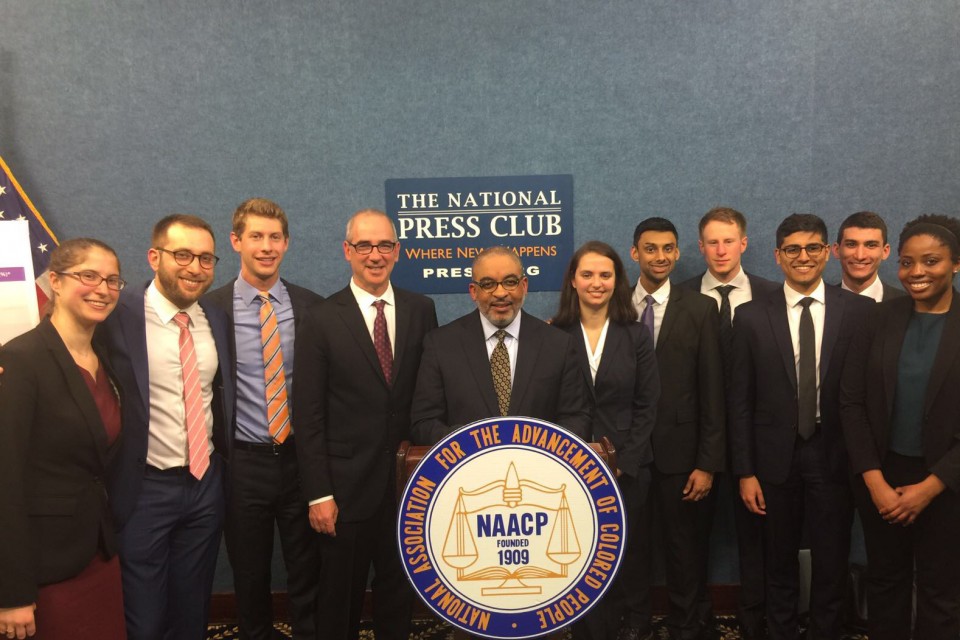 The National Association for the Advancement of Colored People (NAACP) together with Prince George’s County, Maryland, the NAACP Prince George’s County Branch, and two county residents, sued the federal government on March 28, 2018, to combat the imminent threat that the 2020 Census will substantially undercount African Americans and other people of color in communities throughout the United States. The lawsuit alleges that the Census will cause inequalities in political representation and deficiencies in federal funding of those communities. The plaintiffs are being represented by the Rule of Law Clinic at Yale Law School, Jenner & Block, and the NAACP Office of the General Counsel. The Rule of Law Clinic also represents the plaintiffs in a pending Freedom of Information Act case.

The lawsuit, filed in the U.S. District Court for the District of Maryland, seeks to compel the Bureau of the Census, an agency within the Department of Commerce, to prepare for and conduct a full and fair Census in 2020, as the U.S. Constitution expressly requires.

“The NAACP is committed to ensuring that the 2020 Census does not systematically undercount communities having large African-American populations, such as inner-city neighborhoods, while substantially overcounting communities that are less racially diverse,” said Derrick Johnson, president and CEO of the NAACP, America’s largest and original legacy civil rights organization. “The Census must not serve as a mechanism for diluting the political power of African-American communities and depriving them of their fair share of federal resources for an entire decade,” he added. “We are prepared to fight against any plan that effectively turns the census into another form of voter suppression and economic disempowerment in our communities.”

The U.S. Constitution requires the federal government to conduct an “actual enumeration” of the U.S. population every 10 years. Census results serve as the basis for apportioning congressional seats to each state, redrawing legislative district lines at both the federal and state level, and enforcing voting rights laws. The federal government also uses Census data to distribute billions of dollars to local, state, and tribal governments.

The 2020 Census, however, remains inadequately funded, according to the lawsuit. The Census Bureau is understaffed, and is emphasizing processes that will only serve to increase undercounts in communities of color, the lawsuit states. According to the legal filings, the bureau has no permanent leadership in place to direct the count and has cancelled crucial pre-Census field tests while rushing to digitize the Census without adequate cybersecurity protections. This serves to undermine public confidence in the privacy of Census data and threatens to inflate the undercount, according to the clinic. Further still, the bureau plans to devote insufficient resources to community partnerships, door-to-door canvassing and other processes designed to encourage communities of color to participate in the Census, according to those involved in the case.

The issues facing the 2020 Census have already caused the Government Accountability Office to label it a “high risk program.” Prince George’s County has acutely felt the harmful effects of past Census undercounts. The county, which has a majority African-American population, suffered a 2.3 percent net undercount in the 2010 Census—the largest net undercount of any county in Maryland, and one of the largest of any county in the nation, according to the lawsuit.

Bob Ross, president of the NAACP Prince George’s County Branch and a named plaintiff in the lawsuit, agreed that an ill-prepared Census hurts his community in several ways. “When the Census Bureau undercounts my community, we lose political power, and fewer of our federal tax dollars end up coming home to fix our roads, run our schools, and fund our federal programs,” said Ross. “We felt these effects in the aftermath of the 2010 Census, and all signs indicate that the 2020 Census will be even worse.”

“The priorities embraced by the bureau for the 2020 Census threaten to worsen substantially the undercount of communities of color that occurred in the 2000 and 2010 censuses,” said Charlotte Schwartz ’19, a law student intern with the Rule of Law Clinic.

This lawsuit is not the first time the NAACP has taken legal action related to the 2020 Census. In October of 2017, the NAACP, NAACP Connecticut Conference and NAACP Boston branch filed suit under the Freedom of Information of Act to compel the Commerce Department to produce documents about preparations for the 2020 Census. That suit, in which the Rule of Law Clinic is representing the plaintiffs, is ongoing.

The Rule of Law Clinic launched at Yale Law School in the Spring of 2017 and in less than one year has been involved in some of the biggest cases in the country, including working on the travel ban, the transgender military ban, and filing amicus briefs on behalf of the top national security officials in the country, among many other cases. The core goal of the clinic is to maintain U.S. rule of law and human rights commitments in four areas: national security, antidiscrimination, climate change, and democracy promotion.