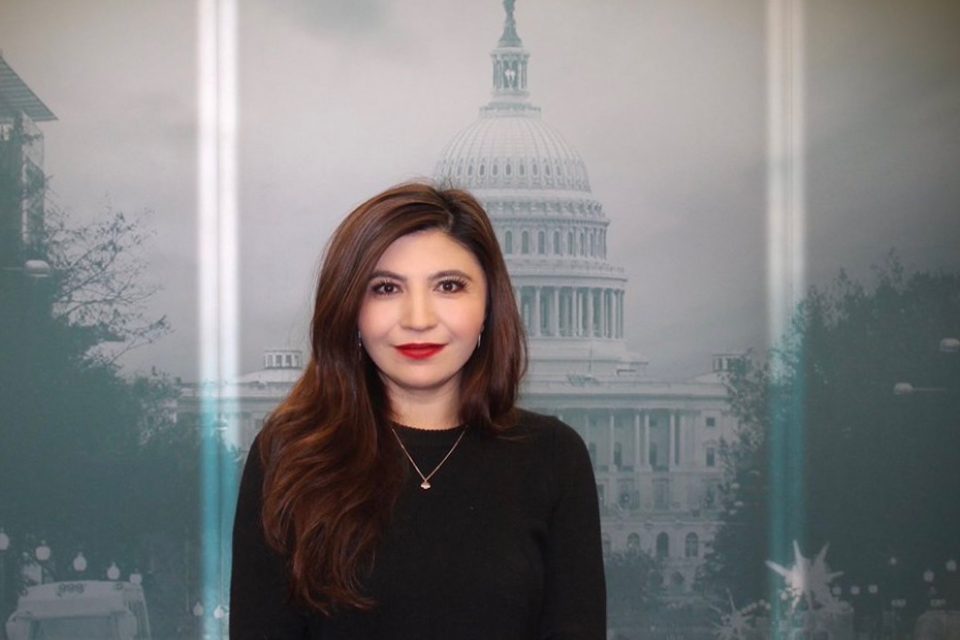 Q: As a lawyer and entrepreneur, how do you believe the business world should engage in the fight for Uyghur freedom in light of its increasing economic interdependence with China?

Rayhan Asat: As an anti-corruption lawyer who served as defense counsel in a white-collar crime practice, I believe business can be a force for good — if there’s enough political will and companies act upon it. I do think that we have reached a moment in trade and business practices where companies are paying attention to human rights abuses, but few have made meaningful change. Change is not coming from the top, so for change to happen, the bottom needs to demand it, which means consumers must demand it.

I need people to understand, regardless of their industry, practice or discipline, that I am not speaking about human rights abuses in abstract terms. This crisis is tangibly affecting millions of people, including myself, a fellow here at the law school. Since 2020, I have been leading a public campaign for the release of my brother, Ekpar Asat, who has been held in the Xinjiang internment camp system since 2016. We need to take action. There is a lack of global solidarity to address the crisis in the Uyghur region, as international actors pursue the high potential for profit. Not only do we need action from governments and enforcement agencies, we also need support from institutions, including every member of this fine institution. We need to seek truth and justice. We cannot just look away.

Some positive steps have already been taken. Since December 2021, the Uyghur Forced Labor Prevention Act has gone into effect, and goods made with Uyghur forced labor can no longer enter U.S. markets, because business should not flourish through forced labor.

Q: What are some recent developments in the Uyghur crisis that have been on your mind?

RA: I want to highlight the survivors and their families who have brought the litany of human rights abuses to light and who have been courageously sharing their stories. I stand with them. Being vulnerable, especially at government and parliamentary hearings that are held to hear these victims’ stories, requires courage. It’s not just moral courage — their family members are being held hostage. There is such tremendous risk, but family members of the victims still speak out.

It is time to recognize their humanity and bravery by joining the cause. I want to see serious action. I’m carrying my loss with me every day, and what is sorely lacking is a firm global response. This is a test case for the international human rights community, to see whether we can stand in solidarity.

Q: What have you observed in the international human rights community’s response?

RA: The international human rights community has been at the top of my mind. I feel like the Uyghur people have very limited avenues for seeking justice. China has been seated at the United Nations Security Council, and it has the power to veto anything, not only in relation to the Uyghurs  — China also vetoes anything that they claim relates to what China calls “internal affairs” of any country including the persecution of Rohingyas.

China’s overwhelming economic influence has created more challenges, because it is intertwined with countries’ business interests. But there’s hope. In Germany, for instance, a nation that is still grappling with its own legacy of war crimes, there are perpetrators of war crimes in Syria who are being prosecuted. As with those prosecutions in Germany, seeking justice for China’s crimes against the Uyghurs shouldn’t just be on the shoulders of the Uyghur people. The burden has to be shared by our collective conscience.

There are ways in which that is already happening. Lithuania’s standing up to China despite the retaliation and trade sanctions, for instance, gives me hope. It doesn’t matter how powerful a country is, there will come a moment in history that the perpetrators of crimes against humanity will have to face the victims and their family members.

Still, no matter how many Chinese officials are prosecuted, it will never fully bring justice. I’ve watched my parents age quickly bearing the scars of loss, and my brother’s life has stopped. His life just stopped since 2016. He is being tortured in solitary confinement, and there is no kind of award of damages that can bring back these years of his life and our lives together as a family.

I hope to bear witness to the historic moment when justice prevails. I hope to see a future in which the Uyghurs are not persecuted for being who they are. And I hope to see China as a nation one day confront its mistakes and the damage it has done to its citizens, allowing people like me to return to the community that we left behind, to see the land that I once called home. One day we will celebrate togetherness. It’s been six years since I last saw my family, and I know others can relate to that longing to return to land we once called home. I hope we can translate that longing into global solidarity.

Q: You recently tweeted “Words are hollow without real action,” shortly after writing an op-ed in the Yale Daily News titled “Yale Must Fight for Uyghur Freedom.” What role should institutions like Yale play in this fight?

RA: We haven’t even seen any word regarding the Uyghur crisis from Yale University to this day. This is not a political issue. We’re talking about egregious human rights abuses. The University needs to step up, especially considering its long history with China. Yale cannot tolerate abuses of this scale. Yale’s investigation of its Chinese investments is a first step. We need to divest from companies and any entities that are enabling what’s happening in the Uyghur region.

But I worry that universities are self-censoring, fearing that China will react. Why allow a government that is accused of committing genocide to dictate the University’s actions? Yale should begin with a statement of acknowledgement, that the University stands in solidarity with Uyghur people in the pursuit of justice.

Q: What are some of the communities at Yale and in New Haven that you have founded solidarity in?

RA: I’m very grateful to Professor James Silk and Professor Hope Metcalf for giving me this opportunity to work on the most pressing human rights concerns with the Lowenstein International Human Rights Clinic and the Schell Center for International Human Rights. I’m also grateful for every student who stood next to me at the protest before the Harvard-Yale football game. Students here have become my source of energy and determination and inspiration in many ways. I’ve learned that they look at me with respect and aspiration rather than just sympathy. To do this work for years and to keep the ray of optimism is not easy. My human rights advocacy is what justice, love, and circumstance demand of me. That means that I need a lot of support. My life has called me for it — if I don’t show up for my brother and people, nobody will.

Q: What do you hope to do with your time as a Visiting Fellow at the Schell Center?

RA: I look forward to continuing to raise awareness about the plight of my community among the Yale community in the hopes of mitigating human suffering in China’s concentration camps.

I’m excited to work on exploring accountability mechanisms for victims seeking justice potentially in U.S. courts. While litigation can be discouraging, since it often takes years to see the results of a case, it is helpful because public cases often translate into compelling demands for change in the court of public opinion. I’m looking forward to working on exploring these avenues in the hope that American corporations aiding and abetting genocide are deterred and can become agents for change and responsible businesses. I’ll be working intensely with the Lowenstein Clinic over the next few months to design a strategy to support the victims of the Uyghur genocide and their family members and to be a part of the movement to create an anti-slavery human rights regime.

I hope my human rights advocacy can inspire others to join various causes and uplift voices.

Q: How can members of the law school community learn more and take action?

RA: There are so many great pieces written by investigative journalists, including visual journalism, that allow readers to walk through the concentration camps and witness the horrors that are taking place. Sometimes I feel like the crimes committed against the Uyghur community are nakedly visible to the victims and their families, but perhaps are not as real for others, and this VR style journalism allows people to understand the stakes for humanity.

In terms of taking real action, there is a youth-led group that has done so much advocacy for my brother, Burst the Bubble UK. When it comes to mass atrocities, it is imperative to humanize the victims. They are not just statistics. These are real people whose lives have been turned upside down. At Yale and here at the law school, one small action students can take is holding up the photo and name of one victim and posting on social media to demand the Chinese government close the camp. If one student, even just one voice, posts a photo or video saying “I’m a Yale student and I stand with the Uyghurs,” they can effect change and create a movement that could transcend Yale to other universities. It’s a very simple message but it shows the outrage.

Any small demand can create a sea of change. It just requires one compassionate individual. That’s what I want to see. My brother Ekpar is a shining example of truth, grace, and brilliance. I can imagine these wonderful character traits resonate with Yale Law and the broader Yale community. I hope the brilliant legal minds at Yale Law will join me and stand in solidarity with my community.