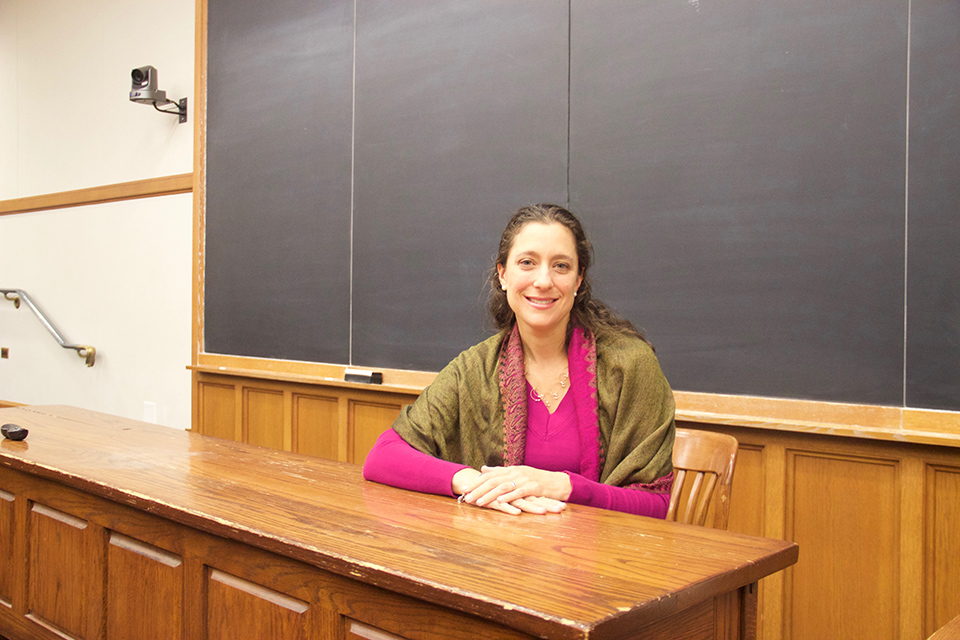 Carrie Bettinger-Lopez spoke at the Law School for a screening of the documentary film “Home Truth.”

Carrie Bettinger-Lopez, a Professor of Law and Director of the Human Rights Clinic at the University of Miami, spoke at Yale Law School on November 4, 2019 following the screening of the documentary film “Home Truth.” The film depicts the story of Jessica Lenahan, a survivor of domestic violence and champion of human rights, as well as Bettinger-Lopez’s role as her lead counsel in her lawsuit against the United States.

After her three daughters were abducted in violation of a restraining order and killed by their father, Colorado mother Jessica Lenahan became an advocate for domestic violence victims throughout the U.S. She pursued various legal venues to hold police accountable for the enforcement of restraining orders — from the U.S. Supreme Court to an international human rights tribunal.

Bettinger-Lopez, the lead counsel on Jessica Lenahan (Gonzales) v. United States at the Inter-American Commission on Human Rights, introduced “Home Truth,” the film that encapsulates Lenahan’s private and public journey and Bettinger-Lopez’s role in the fifteen-year fight for justice.

Bettinger-Lopez’s supervisor urged her to take Lenahan’s case after it landed on the Supreme Court docket when she was “just three weeks into a fellowship at the ACLU.” Bettinger-Lopez said she was able to apply much of what she learned at Columbia Law to the case, especially “where and how international human rights can have an effect in the U.S.”

Of her time as Lenahan’s lead counsel, Bettinger-Lopez said she “learned from their journey together” as “Jessica pushed her attorneys to think outside the box and to respond to her vision of justice.” Prior to the screening, Bettinger-Lopez forewarned the audience that the film was “hard for some people to watch” and it had “no silver lining.”

Filmed over the course of nine years, “Home Truth” follows the timeline and trajectory of Jessica Lenahan’s marriage, trauma, relationships, and legal battles. The film begins with an unsettling fact that set the stage for the story: “One third of American women will experience domestic violence in their lifetime.”

The film followed Lenahan’s family from the 1990s in Castle Rock, Colorado to the present day. In 1990, the family consisted of Jessica Lenahan and her husband, Simon Gonzales, along with their three young daughters — Rebecca, Katherine, and Leslie — and their older son Jessie. Behind the joy depicted in the home videos, Lenahan described her husband as having gone “from being structured to being controlling.” In the film, Lenahan describes how he “kept [her] at home” and eventually attempted to commit suicide on their daughter Leslie’s third birthday. As a result of the trauma Simon Gonzales caused to the family, the film reported, Lenahan filed for a restraining order. The courts required that Gonzales stay “one hundred yards away from the home” and only interact with his children during “prearranged visits.”

The film showed Lenahan explaining that after Gonzales had “run-ins with the police,” “stalked [her] at work,” and “sat outside [her] house,” all in violation of the restraining order, their daughters expressed that they did “not want to see daddy anymore.” Gonzales’s behavior culminated on June 22, 1999, when he kidnapped the three girls while they were riding their bikes. Lenahan called the Castle Rock Police Department five times and visited the station twice that night to no avail. In the film, she said she was repeatedly told by police to “call back and wait,” despite Gonzales’s violation of the restraining order, given that the police said that they had “no indication that Simon was going to kill the girls.” Around 3 a.m., Gonzales appeared at the police station, shooting at the police. The police returned fire and killed him, only to find the bodies of Rebecca, Katherine, and Leslie in the back of his truck. In this moment, Lenahan said in the film, the “law failed [her].”

Lenahan sued the town of Castle Rock, arguing that they “violated her constitutional rights” by failing to “act on the restraining order.” Filing the lawsuit meant “embarking on a frightening journey propelled by her children,” Lenahan said. Her case, which would be a decisive one for survivors of domestic violence, made it to the Supreme Court. It raised the question of whether local governments are required to actively enforce restraining orders upon the holder’s request.

In 2005, the Supreme Court held that Lenahan had “no due process right” to the enforcement of the domestic violence restraining order. Justice Antonin Scalia wrote in the majority opinion that state law did not entitle Lenahan, the holder of a restraining order, to any mandatory police action; instead, any action to be taken is at the police’s discretion. Once this decision reached Lenahan, she expressed in the film that it had “destroyed any belief [she had] in what was right or true.”

After the case, Jessica Lenahan underwent significant life changes. Prior to these traumatic events, she explains in the film, “everything was place, time, and routine.” However, she says that the “mother and woman she was died that night too.” She developed PTSD and struggled to maintain her remaining relationships with her mother, Tina Rivera, and her son, Jessie. Her relationship with her son was strained after he moved in with his grandmother. Jessie felt, he expressed in the film, that “nobody was looking out for [him] except [himself].” In 2008, Lenahan found herself needing to “rebuild her life.”

Despite her devastation, Lenahan “wanted someone held accountable” for the negligence that she believes led to her daughters’ murders. She revived her case with the help of the ACLU, and decided to pursue “nationwide policy reform to ensure enforcement and investigation into the actions of the police.” In doing so, she was the first domestic violence victim to bring a case against the United States before an international tribunal. At the Inter-American Commission on Human Rights hearing, the U.S. State Department stated that the “police acted reasonably and in good faith based on the information they had at the time,” a claim that was especially hard for Lenahan and her mother and son to hear.

At that hearing, Jennifer Kaplan, Attorney Advisor at the U.S. Department of Justice’s Office on Violence Against Women, approached Lenahan to express her support. After the screening, Carrie Bettinger-Lopez, explained that the moment was demonstrative of the “individual appreciation for the cause” felt by many government officials despite the “structural barriers” preventing them from joining the cause themselves. Bettinger-Lopez argued that Kaplan does “great service to other women” in her position, as she is “doing the hard work in the belly of the beast.”

After this first hearing, Bettinger-Lopez said in the film, she and Lenahan had “won in all of [their] major arguments.” The Commission acknowledged that the U.S. violated Lenahan and her daughters’ human rights since the restraining order was not enforced. Still, the Commission could only recommend that the U.S. government make the enforcement of restraining orders mandatory and that it implement “better training to protect victims of domestic violence.” The Commission had no power to enforce the implementation of these measures. After the decision, Bettinger-Lopez engaged in “closed-door meetings” with the U.S. government to “pressure them to address the Commission’s recommendations.”

In 2014, on the fifteenth anniversary of the night Lenahan’s daughters were abducted and murdered, the Commission called for a final hearing to urge the U.S. government to reform its policy on restraining orders and urge they investigate the murders. However, at the hearing, U.S. government representatives insisted that the Department of Justice “does not have the legal authority to initiate an investigation.” At this statement, Lenahan interrupted the hearing, responding: “you can do anything you want.” In her frustration, Lenahan explained in the film, she decided she had “finally come to a stopping point;” she did not “want to keep reliving” her trauma, so Bettinger-Lopez and Lenahan decided to stop pursuing the case.

It was not until 2015 when Lenahan and Bettinger-Lopez began to see the fruits of their labor. The Department of Justice began to issue guidance on domestic and sexual violence to police departments nationwide and twenty-eight U.S. counties passed legislation making freedom from domestic violence a human right.

Following the screening, Bettinger-Lopez discussed some of the film’s takeaways. One of the legal challenges she faced was that the “legal dimension of duty to protect” is narrow in constitutional law while “amply interpreted” in international law. This disconnect between the two different interpretations made it difficult for the two systems to work together. She also expressed her “disappointment and frustrations” with human rights work, explaining her sense that the Commission hearings were “rehearsed performances of actors.” Working through these challenges, Bettinger-Lopez added, was particularly difficult while balancing a commitment to the cause with her work’s repercussions on Lenahan’s well-being.

In spite of these and other difficulties, Bettinger-Lopez believes her and Lenahan’s fight for justice successfully revealed many “stereotypes and biases” in policing and propelled “coalition-building.” She explained that, through their work, the “international law conversation began intersecting with the gender violence and domestic violence conversations.”

To this day, the film said, Lenahan “maintains there was never a real investigation into how and where [her daughters] died.” Given that the Supreme Court upheld police discretion on restraining order enforcement, urging the Castle Rock municipality to respond “is an uphill battle unlike anything I’ve ever seen,” Bettinger-Lopez said. However, she believes their fight for freedom from domestic violence “enabled conversations behind the scenes” that led to “meaningful policy change” and gave others hope.