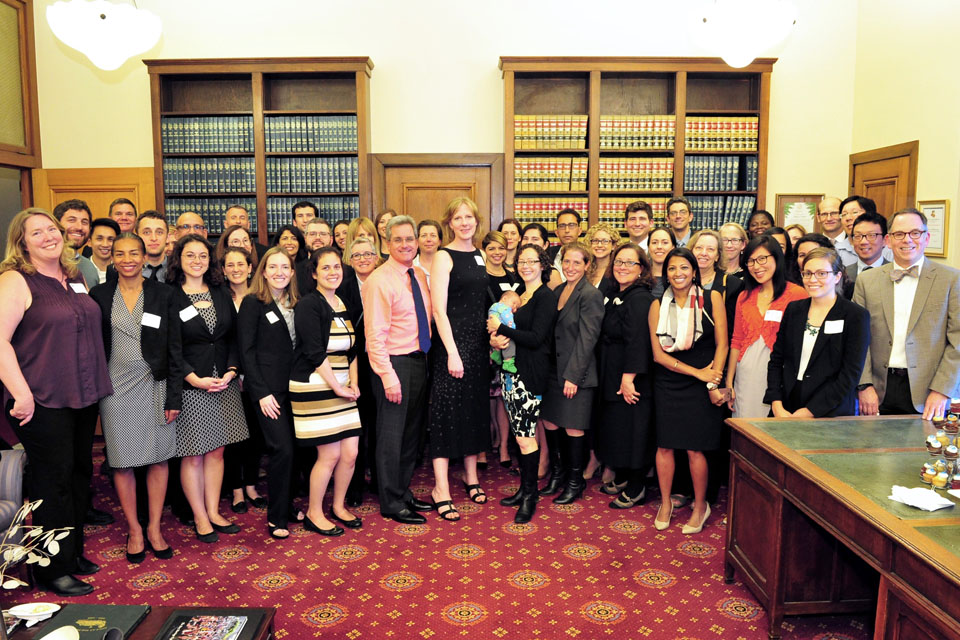 It began with a serendipitous meeting between Professor Heather Gerken and then San Francisco Deputy City Attorney Kathleen Morris at a convention in Washington DC. Morris was helping the City build its affirmative litigation program and Gerken had an expertise in the workings of local government.

The conversation sparked a unique idea to harness the power of an army of energetic, bright Yale Law School students to research cases for the City Attorney’s Office in exchange for an unparalleled experience working alongside top lawyers in the field.

In the clinic, SFALP students work with San Francisco Deputy City Attorneys to conceive, develop, and litigate some of the most innovative public-interest lawsuits in the country—lawsuits that tackle problems with local dimensions but national effects.

“They’ve worked on a consumer-protection suit that made the cover of Business Week,” said Professor Gerken. “They helped win a billion-dollar judgment against the lead paint industry, which has been notoriously hard to hold accountable. They worked on the Proposition 8/marriage equality case, dubbed ‘the trial of the century.’ They are now working on what we think is the only active food-law trial in the country. They have done cutting-edge work on privacy issues, gay rights, environmental reform, housing, immigration, and labor/employment. It’s been a great run.”

In the process of getting this hands-on experience, the students have proven themselves to be an asset to the City Attorney’s Office.

"Yale Law students and the SFALP program have proven invaluable to the attorneys, and frankly, our entire affirmative practice," said Palak Sheth, Managing Director of the Affirmative Litigation Task Force in the San Francisco City Attorney's Office.  "Our office sets out to correct major injustices in California by bringing engaging in challenging litigation.  The additional resources that SFALP provides through the students high-caliber legal writing and research is truly exception and critical to our practice.  Their analysis of complex legal issues, generation of new targets for us to pursue and assistance on all active litigation cases is incredibly valuable."

In July 2016, dozens of SFALP alumni from Yale Law School gathered in San Francisco with all of the people who have made the program a success to celebrate a decade together. Gerken said nearly 200 students have worked in the clinic, clocking roughly 30,000 hours of work for the city. At the event, Gerken thanked those who have made the partnership possible, including Dennis Herrera, the City Attorney for San Francisco, who Gerken described as a “stalwart of the program from the beginning.” She also thanked Morris, who helped start the project, Erin Bernstein, who took over the reins when Morris left, and all of the current staff attorneys who have helped mentor the students.

“What’s most remarkable is that you didn’t just set a generation of young lawyers on their path, you carved that path for them,” Gerken told the attorneys at the event.  “I am grateful for every minute you spent with our students. But I am even more grateful for the example you have set for them. You showed them that law is an honorable profession, and that government lawyering requires a capacity, an integrity, an ethics even greater than the profession itself.”

The experience with SFALP is particularly valuable, Gerken said, because students have the opportunity to work on “once in a career kind of cases,” every semester.

“One of the biggest cases I worked on while I was involved in SFALP is the City Attorney’s case against the major manufacturers of lead paint,” said Yael Shavit ’13, a SFALP Fellow from 2013-2014 who also worked in the clinic as a student.

The lead paint case was brought by the San Francisco City Attorney’s Office and nine other California cities and counties under a public nuisance theory. During the trial, the plaintiffs presented evidence that the three defendant companies aggressively promoted and sold lead paints for home use despite knowing that those paints were highly toxic, particularly to children.

In December 2013, the cities and counties won a $1.1 billion judgment against the lead paint companies. The lawsuit broke new legal ground and was the longest-running SFALP project as students worked on the case over the course of eight years.

“My work with SFALP is where I first learned how innovative and fun litigation can be, and the satisfaction that comes from developing creative approaches to protecting the rights of people who are on the wrong side of power and information imbalances,” said Shavit. “My experience with SFALP informed my decision to pursue a career in consumer protection law and led me to apply to my current fellowship with the National Consumer Law Center.”

Yale Law School students were also on the front lines of winning the historic Proposition 8 case before the U.S. Supreme Court, which legalized same-sex marriage in California. The 5-4 ruling in Hollingsworth v. Perry came down in June 2013 and found that backers of Proposition 8 lacked standing at the Supreme Court and the appellate court, which essentially struck down the law, thereby preserving the lower court’s ruling striking down Proposition 8.

All along the way to the final decision, SFALP students worked diligently on the case, conducting legal research to help inform the City’s merits brief before the Supreme Court and engaging in strategic discussions with San Francisco Deputy City Attorneys to help them decide how to approach certain issues. Students also helped edit the final brief and assisted the City in understanding and coordinating the amicus filings.

Jill Habig ’06 became the SFALP fellow in 2009 and remembers vividly when a judge initially granted San Francisco’s motion to intervene in the Perry litigation. It was her first day on the job.

“I dove right into trial prep,” recalled Habig. “Because of SFALP, I had the opportunity not just to have a front row seat to history in the making, but to play a small role in shaping the law to affirm people's rights, dignity, and equality.”

Habig said that whether working on a giant case like Perry or on any of the other litigation in the office, being a part of SFALP was a formative experience.

“Beginning my 1L year, I was able to work side by side with amazing litigators on cutting-edge reproductive rights, marriage equality, and consumer protection cases,” said Habig, who joined SFALP right as it was getting started. “SFALP gave me not only the legal tools I needed, but more importantly it taught me to appreciate the powerful role public entities can play in vindicating their constituents' rights.”

Habig was most recently an advisor to Attorney General Kamala Harris, where she helped create a new section of the California Department of Justice, the Bureau of Children's Justice, dedicated to enforcing children's rights in education, child welfare, and juvenile justice.

“I could not have done that work without the knowledge, experience, and inspiration I gained from SFALP,” Habig said.

Today, the SFALP experience remains just as critical for the students and fellows that participate each year.

“Working as the SFALP Fellow has been a fantastic experience,” said Tessa Bialek ’13, the 2015-2016 SFALP fellow. “I got to work closely with an amazing group of thoughtful, dedicated, and big-hearted students, and I also got to work with outstanding attorneys doing righteous, creative, good lawyering. I learned so much on both fronts.”

Bialek and the other past fellows also noted how critical Professor Gerken has been to SFALP’s success.

“Working with and learning from Professor Gerken, who is an incredibly dedicated teacher and a champion of the SFALP program, has been a highlight of the year,” said Bialek.

“I can’t overstate what a wonderful opportunity it was to work with Professor Gerken during my fellowship year,” added Shavit.

With the clinic now more robust than ever, Gerken said her hope is to see it continue to grow and thrive.

“Every year the program gets stronger, and it’s entirely due to the students and the remarkable fellows who have helped run the program,” said Gerken. “So I guess my wish is for the program to continue to improve at the same pace it has in the past. That might seem like a modest wish, but it’s ridiculously ambitious.”