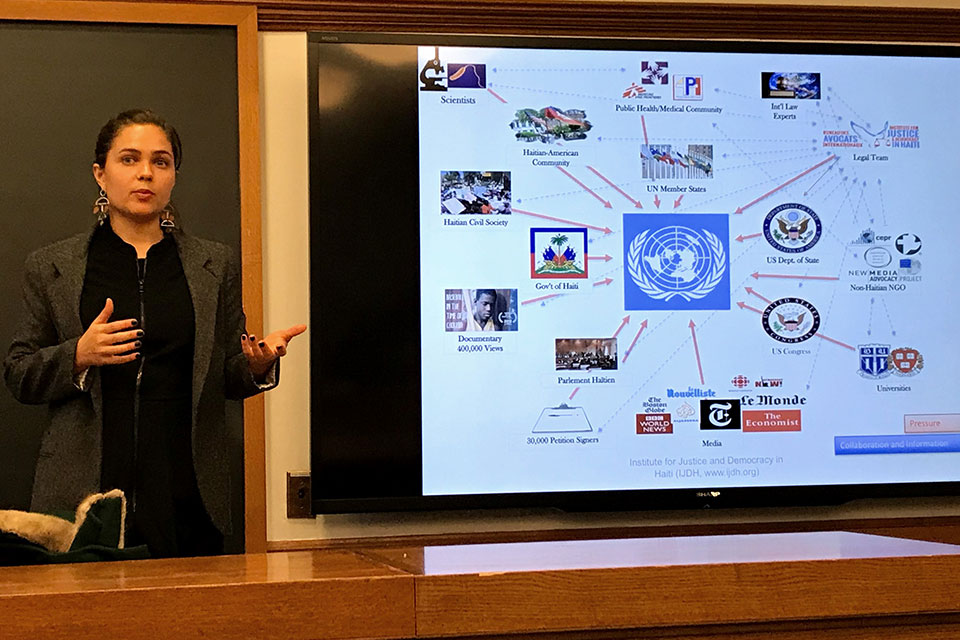 Sienna Merope-Synge, a Staff Attorney at the Institute for Justice & Democracy in Haiti (IJDH), spoke on February 12 about her organization's fight to secure adequate remedies for victims of the U.N.'s introduction of a 2010 cholera epidemic in Haiti. The talk was co-sponsored by the Schell Center, the Global Health Justice Partnership (GHJP), and the American Constitution Society.

Merope-Synge began by explaining that many viewed this cholera outbreak-the first in Haiti's history—as a humanitarian crisis, not a legal one. But as it became clear that the U.N. peacekeeping mission in Haiti had caused the crisis by dumping contaminated waste into local rivers, people began coming to IJDH's offices and ask whether there was something the law could do to address the situation.

IJDH had to work creatively, since the U.N. has very strong immunity protections and could not be prosecuted in any Haitian court. Merope-Synge explained that IJDH decided to file complaints with the U.N. against its peacekeepers, on behalf of 5,000 different clients. IJDH's goals were to get compensation and a public apology for victims and to make the U.N. help eliminate cholera in Haiti. But the U.N. refused to address the complaints, so IJDH sued the U.N. in U.S. federal court.

IJDH did not win its case in U.S. court, but, as Merope-Synge explained, they never expected to: "If this was a story just about litigation, that'd be the end, and you'd have no avenue for justice. But we recognized that given the politics of U.N. immunity, we couldn't rely on courts to be the tool of justice." She emphasized that there was still value in the court case because it framed the issue "in terms of rights." But, she adds, "Our role was always to build a movement around cholera justice."

To accomplish that, IJDH urged a diverse collection of actors in its network—including media outlets, former Nobel Peace Prize winners, scientists, and public health officials—to put pressure on the U.N. IJDH even turned to Yale Law School: with GHJP, they published a report on the U.N.'s responsibility. IJDH also applied pressure to different U.N. actors. Merope-Synge stressed that the U.N. bureaucracy is not monolithic: "When you start to break it down, you'll find that a certain branch might only be four people, and you can find allies within those areas."

Finally, in 2016, the U.N. admitted its involvement in Haiti and apologized. Merope-Synge watched then Secretary General Ban Ki Moon's televised apology at IJDH's office in Haiti alongside more than 100 victims, who broke into applause after he finished speaking. "It was incredibly important and meaningful to the folks we work with," she said. "I think we sometimes overlook the value of symbolic gestures-they're not enough, but they're important."

Beyond the apology, as Merope-Synge admitted, it has been an "uphill struggle" to force the U.N. to fulfill its promises of providing $400 million in compensation to victims. She also expressed her concern that the U.N. has not learned its lesson, citing reports that the U.N. has since dumped waste in several other countries where its peacekeepers are stationed.

Merope-Synge argued that the U.N. would not change its ways until it is held more accountable for its actions. "Top-ranking officials and the U.N. don't think that they have to abide by the law," she said, "and it's unrealistic to think such people will pursue expensive policy changes to safeguard local populations." She stressed that if an organization is free from legal liability, it lacks any incentive to change. She concluded, "We can't have a conversation about prevention without having a conversation about accountability."

The Schell Center's Lowenstein Clinic has worked with IJDH on other projects: a request to the Inter-American Commission on Human Rights (IACHR) concerning human rights violations committed by the former mayor of Les Irois, Haiti, and a petition to the IACHR on violations that arose out of the overthrow of Haiti's democratically elected government.