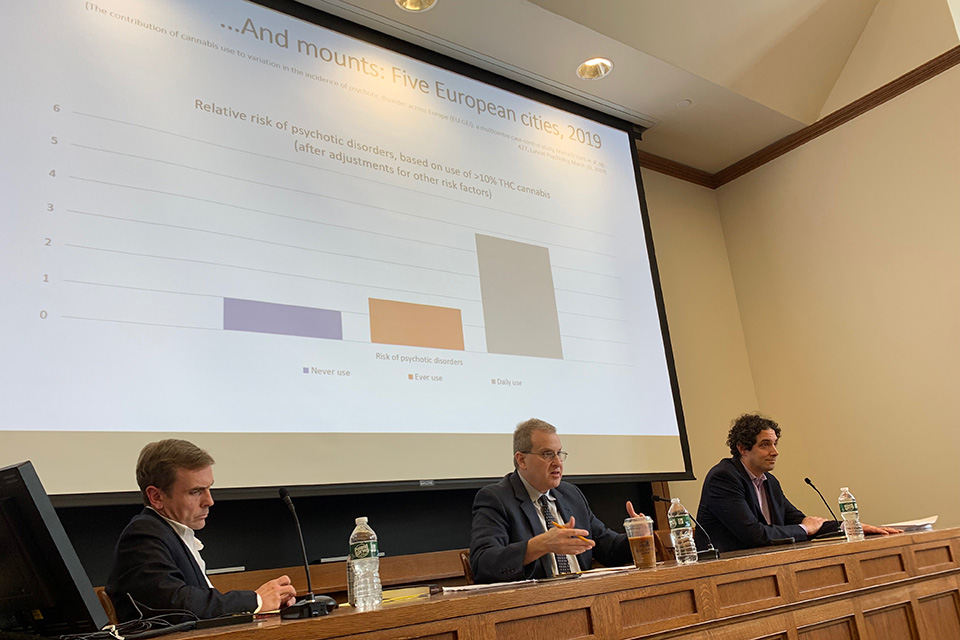 On October 17, 2019, the Solomon Center for Health Law and Policy and the Justice Collaboratory cohosted a debate about long-term cannabis use and what, if any, connection it has to mental illness and violence.

The debate featured Alex Berenson, a former New York Times reporter and author of the controversial 2019 book Tell Your Children: The Truth about Marijuana, Mental Illness and Violence, and primary care physician Dr. Peter Grinspoon, an instructor at Harvard Medical School, board member of Doctors for Cannabis Regulation, and son of Dr. Lester Grinspoon, the “grandfather of medical marijuana.” The discussion was moderated by Professor Jason Schwartz, Assistant Professor in the Department of Health Policy and Management at the Yale School of Public Health.

WATCH: VIDEO OF THE DEBATE

In an opening presentation, Berenson summarized several studies that he argued supported the thesis of Tell Your Children — that cannabis significantly increases long-term users’ risk for developing psychosis, a mental disorder in which the individual loses contact with reality. Though Berenson did not address the second component of his book’s thesis — that long-term cannabis use raises users’ likelihood of committing violent acts — in his opening remarks, that argument was a key focus of Grinspoon’s initial response.

Grinspoon addressed the negative impact he feared Berenson’s claims might have on minorities and the mentally ill. He warned that the consequences of incarceration were much more severe than any risk of violence associated with marijuana use and that the stigmatization of mental illness could be damaging to already vulnerable individuals. Grinspoon also queried whether decreasing marijuana use could truly impact violent crime in the U.S. Berenson responded that while he does not support either incarceration of minorities or alienation of the mentally ill, he believes that the public health crisis revolving around marijuana and mental illness is too overwhelming to be written off quickly.

Berenson and Grinspoon further debated the data supporting an association between marijuana use and psychosis, and Grinspoon asserted that the correlation may indeed be more indicative of self-treatment of symptoms linked to developing psychosis for those with predisposition to the condition. Grinspoon also highlighted the relief medicinal marijuana can bring to patients struggling with conditions like chronic pain and cancer, asserting that these benefits far outweigh the risks Berenson posits.

Despite broad disagreement, Berenson and Grinspoon both agreed that the best next step towards resolving this debate was to facilitate more research, which is currently constrained by marijuana’s categorization as a Schedule I substance under the Controlled Substances Act.

During audience Q&A, students, professors, and medical providers challenged assertions from both speakers. Audience members pushed Berenson and Grinspoon for clarity on their use of the term “cannabis,” given its wide variation in potency and relative chemical composition. Some questioned Berenson on his reliance on studies with large confidence intervals, while others commented on their own observations of increased marijuana-related psychosis in their medical practice.

The livestreamed event also inspired a lively exchange on Twitter, where both Berenson and Grinspoon are active tweeters with large followings. The exchange was covered by the London Free Press.