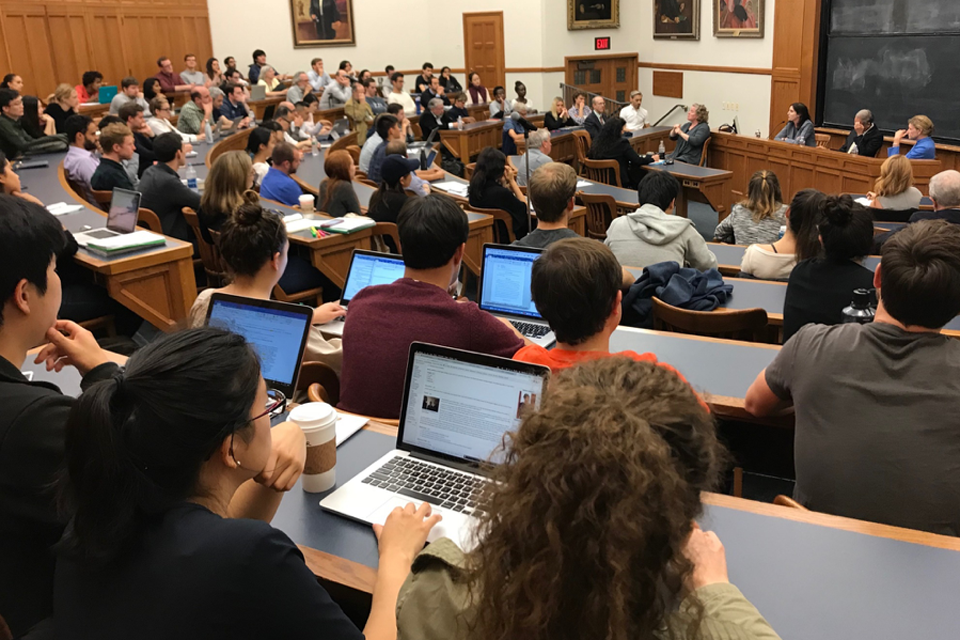 On October 11, 2017, the Solomon Center for Health Law and Policy, Yale Health Law Policy Society, and American Constitution Society hosted a panel entitled “Congressional Gridlock and the Future of Health Care Reform.” The discussion featured Senator Russ Feingold, the Martin R. Flug Visiting Professor in the Practice of Law at Yale Law School, Professor Abbe Gluck ’00,  Professor of Law and the Faculty Director of the Solomon Center for Health Law and Policy, and Jeanne Lambrew, Ph.D, Senior Fellow at The Century Foundation and former Deputy Assistant to the President for Health Policy under President Obama.

Professor Gluck opened the discussion with an overview of the current landscape of “repeal and replace” efforts. She noted recent successes in defending the Affordable Care Act (ACA) and discussed the potential impact of another health care executive order from President Trump.

Dr. Lambrew then offered an analysis on the forces at play behind-the-scenes to defend the Affordable Care Act. She called out four new and unexpected actors that were crucial to successfully defending the law over the last several months. Specifically, she highlighted the roles of:

(1)  Congressional Budget Office analysts and research institutions who released detailed data on the impact of repeal bills on various constituencies and states, arming Members of Congress with tools to push back.

(2)  Republican Governors who advocated for maintaining the Affordable Care Act’s Medicaid expansion and became ardent defenders of the law.

(3)  Engaged citizens, including people like Jimmy Kimmel and the “little lobbyists,” who participated in town halls, transformed Twitter into a policy analysis forum, came to the Capitol, and used their platforms to bring more discussion and action to protecting health care coverage.

(4)  Former critics of the ACA, such as state insurance commissioners and large health insurers, who became star witnesses at congressional hearings and cautioned that only minimal changes, not a wholesale restructuring, were needed to stabilize the ACA.

Senator Russ Feingold reflected about his time in Congress during the passage of the Affordable Care Act and whether he thought bipartisanship could be restored. He offered a perspective of optimism, noting that the failure of Republican-led repeal efforts may have opened up the door for more bipartisanship moving forward.

Dr. Lambrew also offered some words of advice to the students as future policymakers and lawyers. She counseled that no policy is perfect—every policy will need changes and incremental actions to improve it. Finally, she encouraged Yale Law School graduates to move into health law and called out the many YLS alums and lawyers that have and will continue to play a central role in implementing and defending the Affordable Care Act now and into the future.