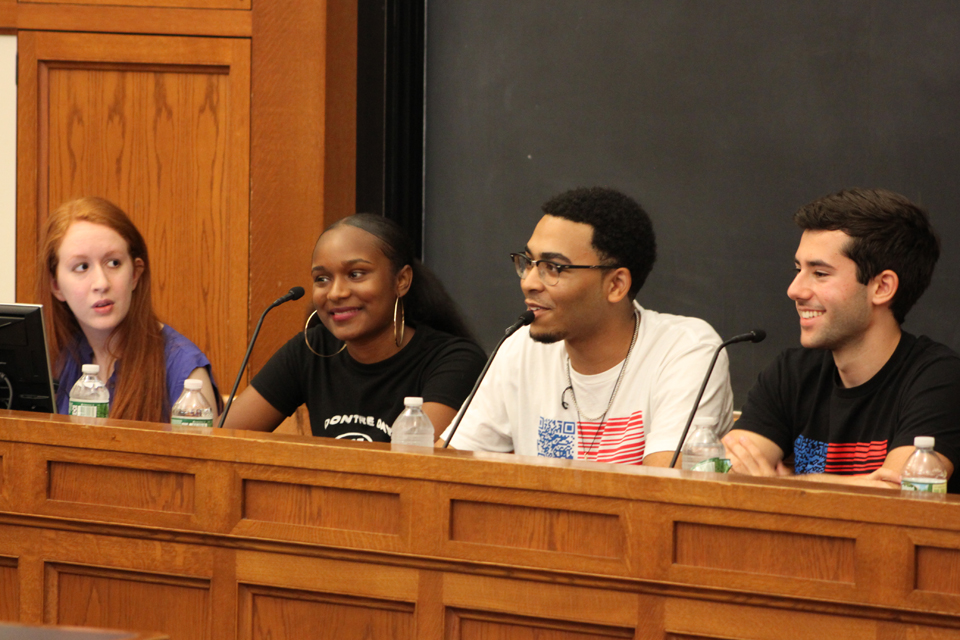 The Solomon Center for Health Law and Policy kicked off the academic year with a lunch event on gun reform and student activism on September 6. The event featured students from March For Our Lives — a student-led grassroots movement initiated after the February 2018 mass shooting at Marjory Stoneman Douglas High School in Parkland, Florida — and United States Senator Chris Murphy of Connecticut, who joined by video-conference from Washington, D.C.

Solomon Center Student Fellow Erica Turret ’20, a Marjory Stoneman Douglas alumna, moderated the discussion. Senator Murphy began the event noting congressional inaction on gun legislation despite public sentiment overwhelmingly in favor of certain gun control measures like universal background checks. Murphy thanked the students for their activism and stated that the country was on the “precipice of something important happening.” Corin asked Senator Murphy about how he planned to respond to Secretary Betsy DeVos’s plan to provide federal funding to arm teachers in schools. The Senator argued that the Devos’s action likely exceeded her statutory authority: the provision for that grant funding requires schools to promote a “weapons-free environment,” while a separate, recently enacted grant program for school security expressly prohibits the use of that funding to purchase firearms. However, he said that a legislative strategy would ultimately have a greater impact than a litigation strategy — political change would allow for more definitive action to curb gun violence.

The March For Our Lives students described their summer tour in Florida and 26 states across the country that focused on youth engagement and youth voting. The students coordinated with young people in each community to plan their stops, urged youth at each stop to take action, and registered voters as they traveled. The student panelists discussed how conversation bridged the ideological gaps between them and counter-protestors. Contreras and Post emphasized how in speaking with opponents they found common ground — a desire to protect their loved ones and to live in peace.

The students also emphasized the need for an intersectional movement. Smith and Contreras emphasized the diversity of experiences among people affected by gun violence. Smith stated that activists with privilege need to elevate the voices and needs of people from lower-income communities and communities of color; he argued that only through an understanding of a community can people understand how to change the laws to protect the people within it.

When the students were asked what one policy change they would advocate to address gun violence, Post cited the March For Our Lives’s 10-point policy plan that advocates for a range of policy changes to mitigate gun violence in the United States, including disarmament of people convicted of domestic abuse, extreme risk protection orders, and restorative justice measures like increasing the ratio of school guidance counselors to security guards. However, Post argued that the 10-point policy plan was only a start. To curb systemic violence, he believes that lawmakers must also target systemic poverty and racism. Only then, he urged, could the epidemic of gun violence, not just mass shootings and school shootings, be stopped. As the event closed, the students stated that Yale Law School and the greater Yale community have an obligation to use their privilege to drive action on gun legislation — including by using it to give people in less-powerful communities a platform to advocate for change.

The Solomon Center for Health Law and Policy at Yale Law School is the first of its kind to focus on the intersection of law and the governance, practice, and business of health care. The Center brings together leading experts and practitioners from the public and private sectors to address cutting-edge questions of health law and policy, and to train the next generation of top health lawyers, industry leaders, policymakers, and academics.