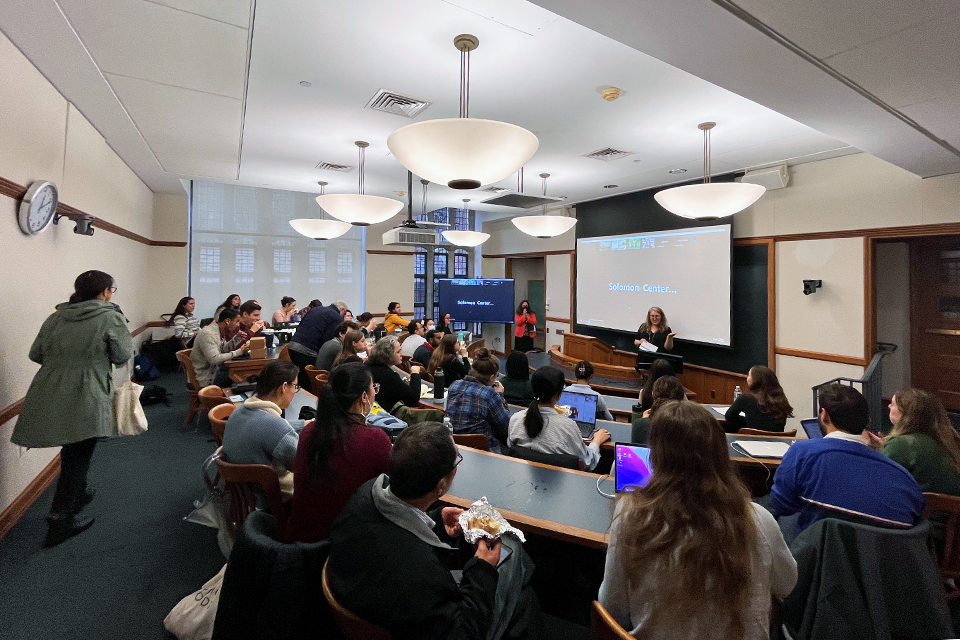 The Solomon Center for Health Law and Policy and the Yale Health Law and Policy Society (YHeLPS) hosted the first event in the Solomon Center’s elder care series on Oct. 24. The event, “Understanding and Reforming Long-Term Care in the United States,” provided an overview of the country’s current provision and financing of long-term care, the benefits and challenges associated with different models of care, and potential areas for reform.

Kohn began with an overview of how long-term care is provided in the U.S., explaining that long-term care includes both the provision of medical services and non-medical assistance with activities of daily living. These services can be provided in institutional settings like nursing homes or assisted living facilities and at home or in community-based settings. In contrast to comparable countries, the U.S. is an outlier in its financing and provision of long-term care, she noted. Rather than a single payer system, people in the U.S. pay for such care through Medicaid (but not Medicare), employer-paid long-term care insurance, or simply out of pocket.

Hoffman then led students through some effects of having Medicaid as the dominant financier of long-term care, especially in light of the COVID-19 pandemic, a topic she has covered in a paper. Hoffman emphasized that because Medicaid is targeted to serve only low-income individuals, there are significant gaps in coverage. As a result, it’s estimated that around 50 million people in the U.S. provide some level of informal care to their family members. Her research argues that this can come at significant costs to those informal caregivers.

Braun then expanded the financing conversation beyond how individuals finance their own care. He explained the growing trend in private equity ownership in nursing homes and hospices in the United States. Citing his own recent research, Braun explained that investors’ incentives not aligned with care (namely, short-term profits) may lead to poorer quality of care and resident outcomes in nursing homes. The complex ownership structures of these facilities have also led legislatures to push for increased transparency in ownership.

Next, Bedlin gave an overview of recent political and legislative efforts to make long-term care more accessible and to improve its quality. These include the push for paid family leave and for greater investments in federal aging services programs. Bedlin stressed that there are roles for both the federal and state governments, and for both public and private providers of long-term care. He also noted that the bias in favor of institutional rather than home- and community-based settings for long-term care must be overcome. His organization and others support a proposal to improve access to Medicaid for home care services, improve wages and benefits for home care workers, and provide relief to family caregivers.

Asked what improvements they would most like to see in the provision of long-term care, panelists gave a wide range of answers. Responses included more focus on the potential of Olmstead v. L.C., the ruling led to the “integration mandate” that has enabled many thousands of people with disabilities to live in their homes and communities instead of in institutions. Panelists also cited the Green House model, an alternative to nursing homes that provides care in a non-institutional, home-like environment. The discussion also included better capitalization of the nursing home system, potentially through increased use of HUD 232 loans, which provide mortgage insurance for residential care facilities. Panels also brought up legislative pushes such as requiring states to have Medicaid pay for home care. These responses reflected the challenges of long-term care in the U.S. and the potential for creative, innovative solutions.